The U.S. Navy's drive during the past decade to become more efficient on both the ship contracting and life cycle management sides has proven to be much more than mere talk. The "new" Navy is embodied in the current LPD-17 project, and U.S. Navy senior officers and engineers recently marked a critical milestone in ship research on January 6, 2000, wrapping up a successful phase in the testing of a full-scale propeller for the USS San Antonio (LPD-17) Class amphibious transport dock ship.

The tests verify that a new compact design for the LPD-17 CPP meets the seven-year service life cycle requirements.

The 17 million cycles completed at the ceremony show that this new design exceeds requirements and that the service life could be extended twofold.

This Naval Sea Systems Command program could lead to a significant saving for the Navy in overhaul costs for the new propeller. The hub and blades, manufactured of nickel-aluminum-bronze and steel, constitute a unique design. The hub has a smaller diameter than in the past, leaving less surface for attaching the five blades and increasing stress in the blade root area and the hub. Verifying the new design will facilitate extending the period between overhauls from seven to 14 years, producing lower costs, easier maintenance and faster upgrades — an affordable propeller with enhanced performance reflecting the fiscal constraints of the modern Navy.

Carderock propeller experts working with the Bird-Johnson Company, the hub designer and prop fabricator, designed the blades. Small scale prop models were then tested in another unique Carderock facility, the Large Cavitation Channel, in Memphis, Tenn. There, scaled props are mounted on ship model hulls where the flow of water over the hull and around the prop is the same as a real vessel at sea.

LPD-17 propeller testing supports the shipbuilder, Avondale Industries Inc., and Bird-Johnson. The overall effort began at Carderock headquarters, Bethesda, in October 1998 and is a fouryear, $2.8 million program involving both structural and hydrodynamic research and development.

The Carderock Division, with its unique laboratories and test facilities, large-scale land-based engineering and test sites, and at-sea measurement facilities, is and has been at the forefront of technologies vital to the success of the Navy and maritime industry for more than a century. The key element in the technological success of the Division is the breadth and depth of its capabilities.

The Division provides cradle-to-grave support for its technical products over an enormous breadth of scientific areas related to surface and undersea platforms.

Today, the Division is applying its expertise to ensure that the Navy maintains tactical superiority in the most cost-effective manner. Such work embodies "core equities" of the Naval Sea Systems Command (NAVSEA) helping fulfill a unique roll in Defense Department acquisition strategy. 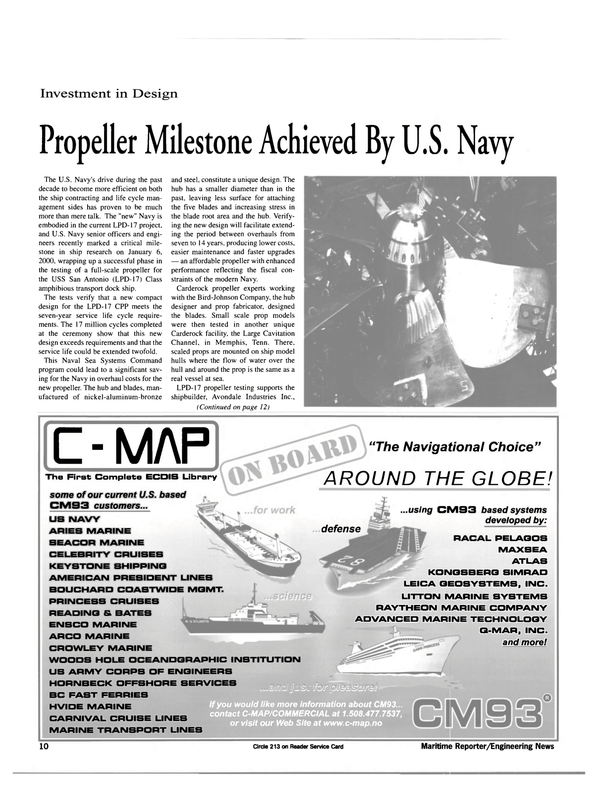