Wartsila NSD has recently completed shipboard trials with the new Wartsila NSD PropacRudder. and results are promising, according to the manufacturer.

The innovative propulsion system, originally introduced a little more than a year ago, was designed to reduce propulsive power requirement, with reduced hull vibration and noise, while providing for exceptional maneuverability. The trials, undertaken last October and November aboard the 5,175-dwt paper carrier Lysbirs, reportedly confirm all of this. Norwegian owner Lys-Line AS of Oslo was the willing test partner (it should be noted that Norwegian owners are renowned for their willingness to work with the industry in the proving of new concepts), and the vessel was equipped with a Propac propulsion package, which consisted of a 6,300 kW Wartsila 6L46C medium speed diesel engine, a 4.5 m diameter Wartsila CP propeller, gearbox and PropacRudder. The PropacRudder's signature is its streamlined torpedo shaped bulb on the rudder horn. The bulb is designed to ensure a more homogeneous water flow both in front of the propeller and in the propeller slipstream. The bulb is designed to increase propulsion efficiency via a wake gain effect, meaning that it reduces the water speed into the propeller so that less power is needed to produce the same thrust. The bulb also has been shown to reduce propeller-induced hull noise and vibration by eliminating hub vortices and separation, and cavitation behind the propeller hub collapsing on the propeller. While model tests showed that solely by applying the PropacRudder. the presence of the bulb gives a large reduction in power of about 10 percent for the same ship speed compared to using conventional flap rudders, the full-scale trials actually demonstrated an even greater power savings. It was noticeable during the trial on Lysbris that propeller-induced noise level is very low right across the range of pitch settings with constant propeller revolutions, without any noisy face cavitation or local hull vibration problems. Also of note was the vessel's maneuverability, particularly during low-speed operation and in restricted waterways. At low ship speeds, event in high winds and fast currents, the vessel was kept under control. In the trial, it was found that the ship can be maneuvered safely at speeds down to just one knot, even in strong currents. The next vessel to enter service with the PropacRudder is the 14,000-dwt chemical tanker Jo Laguna D from Italy's De Poli Yard. 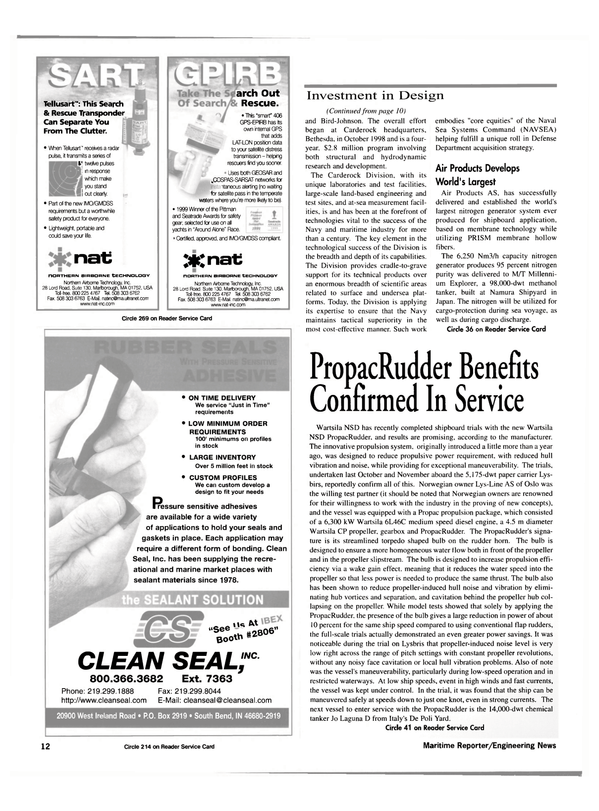