Despite a year of turmoil spurred by its parent company's withdrawal from shipbuilding, Kvaerner Masa-Yard's Helsinki shipyard continued to build on its world renowned tradition of delivering some of the finest cruise liners ever built. In mid-November, Costa Atlantica, newbuilding 498, was launched. The 84.000-gt cruise ship is scheduled for delivery to Costa Crociere S.p.A. in June 2000. The 2,680-passenger ship provides the latest in amenities to ensure the cruise boom continues, including that fact that 80 percent of all staterooms are outside, while 70 percent of all staterooms boast a balcony.

The ship features a diesel-electric machinery arrangement, powered by six Wartsila NSD 9L46D diesel engines, which produced a cumulative 62,370 kW. The propulsion unit consists of two azimuthing electric Azipod propulsion units, with a power of 17.6 MW each, driving the ship to a service speed of 22 knots. In addition, the ship has three l.9l MW tunnel thrusters in the bow.

The Turku yard - which last October delivered Royal Caribbean's Voyager of the Seas, the world's largest cruise ship - subsequently floated out the second ship in the mammoth new series. Explorer of the Seas, just two weeks later. Explorer, which is due for delivery in the autumn of 2000, will be followed by the third ship in the series, Adventurer of the Seas, in the spring of 2002. 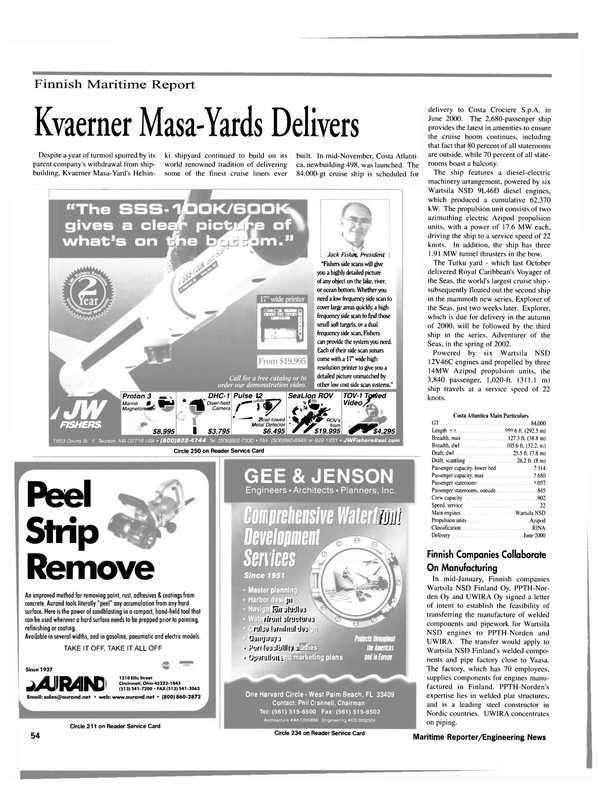