Innovative class for the banana trade

Unequivocal in its belief that European shipbuilding's future will ultimately be determined by its capacity and preparedness to innovate, Howaldtswerke- Deutsche Werft (HDW) has put down a new marker for the industry with a record-breaking class of refrigerated cargo carrier.

Bringing unprecedented unit scale to the business of transporting perishable produce, the 1,000-FEU (40-ft. equivalent unit) Dole Chile and Dole Colom- bia are testaments to HDW's prowess in containership technology, and to its sustained plough-back of funds into application- oriented research and development.

The U.S.-owned pair maintain the international profile of a yard which headed the seminal Schiff der Zukunft (Ship of the Future) research program of the early 1980s, and which subsequently delivered milestone, post-Panamax linehaul vessels to American President Lines, and the world's first open-top containership to Norasia Lines.

The slots encapsulated by the Panamax- beam Dole Chile correspond to a total, refrigerated cargo capacity of approximately 2-million cu. ft., far in excess of the volume offered either by the largest, pallet-optimized reeferships or by existing, cellular container vessels with a high reefer intake.

The 21-knot design is all the more significant for its almost entirely hatchcover- free arrangement, and for a compara- tively tender, maximum draft of 33 ft.

(10.2-m), features reflecting the operating requirements of Dole Fresh Fruit International. The open-top configuration and associated, raised cellular structure; adopted throughout the cargo section bar the furthest forward. No. I hold, promote faster turnarounds of the gantry crane-equipped vessels on their Central America-U.S. Eastern Seaboard service pattern. It also offers distinct advantages as regards heat dissipation from the cargo holds, given the considerable amount of heat given off the reefer equipment integral to the cold storage containers. The investment in the bespoke newbuilds by Dole, reckoned to be the world's largest shipper of fresh fruit and vegetables, has been made against a backcloth of strong brand demand and planning for business expansion. The introduction of the two 30,560-dwt vessels, which will be used mainly for northbound movements of bananas, is central to a strategy of realizing new transportation efficiency goals, and reducing reliance on chartered tonnage.

While considerations of the dependability of supply permeate the latest fleet project, the U.S. operator's parallel preoccupation with cargo care is manifested in the modified atmosphere (MA) arrangements adopted in the two ships.

Dole and the HDW-built sisters' classification society Germanischer Lloyd have substantial experience of both MA and controlled atmosphere (CA) methods, whereby the produce is subjected to a nitrogen-rich environment. This has the effect of retarding the ripening process, so as to prolong product life and ensure that fruit reaches the consumer in peak condition throughout the year. 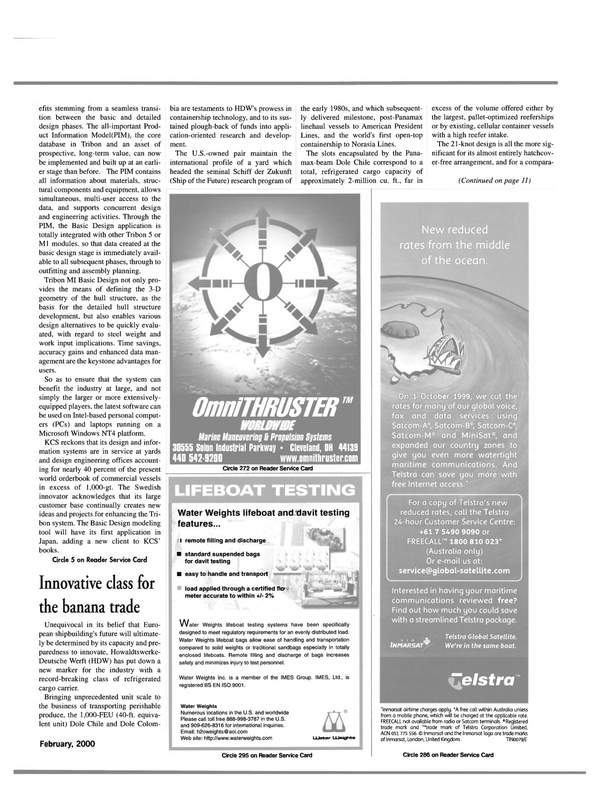