New statistics released by MarAd reveal a much larger and more diverse U.S.-flag fleet than ever before reported.

The new statistics underscore the value of the U.S. marine transportation system to the U.S. economy as it efficiently and effectively provides American businesses access to world suppliers and markets.

The MarAd report brings into sharper focus the size and character of the U.S.

Jones Act fleet, combining data on self- propelled vessels as well as barges for the first time. It shows 37,308 vessels operate domestically under the U.S.

It also illustrates the diverse nature of the fleet, comprised of a wide variety of vessel types, including 25,698 barges on the U.S. inland waterways, 2,433 ships and barges carrying domestic cargo in coastal trades, and 5,446 tugs and towboats.

Fully 85 percent of the total cargo carrying capacity of the U.S. fleet is accomplished by barges, not only in the inland market, but in oceangoing coastwise and non-contiguous trade as well.

The report is the first comprehensive government accounting of the entire American fleet ever available.

This new system of accounting has long been sought by the U.S. maritime industry as a more accurate depiction of the scope, breadth, and capacity of the 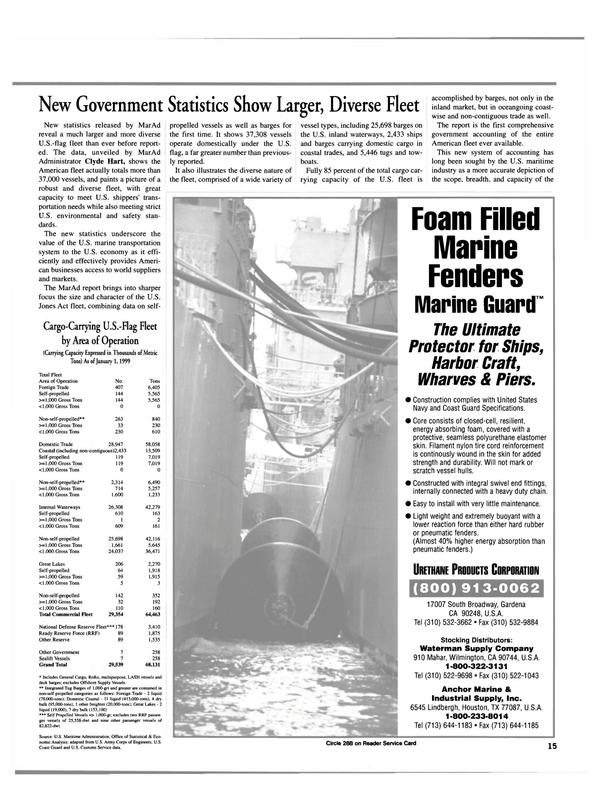