"Reinauer is extremely pleased to have been able to work through Alabama Shipyard in the construction of the first ATB unit in the history of our company," said Craig Reinauer, president of Reinauer Transportation Co. "It was through the efforts of Mark Asbury, president of Alabama Shipyard Inc., his staff and craftsmen that we were able to accept the vessels on time and to the highly recognized standards of ABS. the United States Coast Guard and Reinauer Transportation Company." The ocean-going tug/barge unit features a patented Intercon tug/barge coupler system designed and built by Intercontinental Engineering and Manufacturing Corporation of Kansas City. The system consists of two independently mounted gear-driven ram assemblies, which connect the tug and barge. The connection is transversely rigid and mechanically locked, resulting in a vessel that handles like a commercial ship.

The tug pushes the barge, resulting in speed advantages of 35 percent or more, compared to traditionally towed barges.

The double-hulled barge design mated to a tug with redundant propulsion provides safeguards for the marine environment.

Additionally, the ABS-classed vessels can be engaged and disengaged without crew on deck. 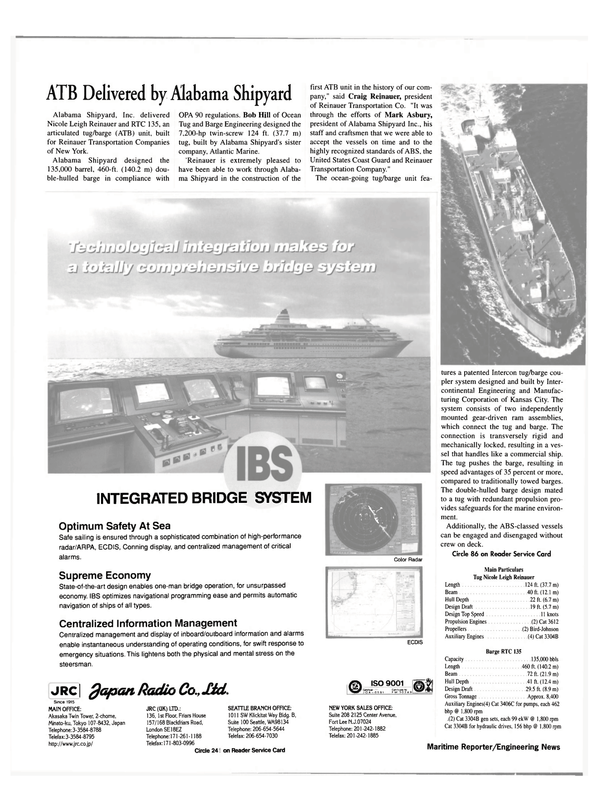