Eclipse was originally constructed as ferry vessel Aegean Sea, for service in the Mediterranean by a Spanish shipyard in 1982. The current owners bought the vessel in 1997 and began the conversion process.

The original vessel was laid out as an 800-passenger day ferry. The vessel's passenger lounges were completely stripped. The second level was extended and a third enclosed level was created on a formerly open deck. The existing swimming pool was refurbished.

The result is a modern overnight cruise ship with 27 comfortable staterooms and a capacity of 48 passengers and 28 crew. The staterooms are located on the main deck and third deck, including four suites on the third deck. All of the staterooms were furnished by Marine Accommodations. All interior spaces were fitted with new modern air conditioning and ventilation systems, including fresh air replacement capability.

Other interior accommodations include refurbished crew staterooms, separate passenger dining room and lounge on the second deck and a library area. A new large size stair tower was added for increased safety.

The vessel is powered by the original Deutz engines, 1.175-hp each. The existing Deutz generators were also reused, and a new emergency generator was added. 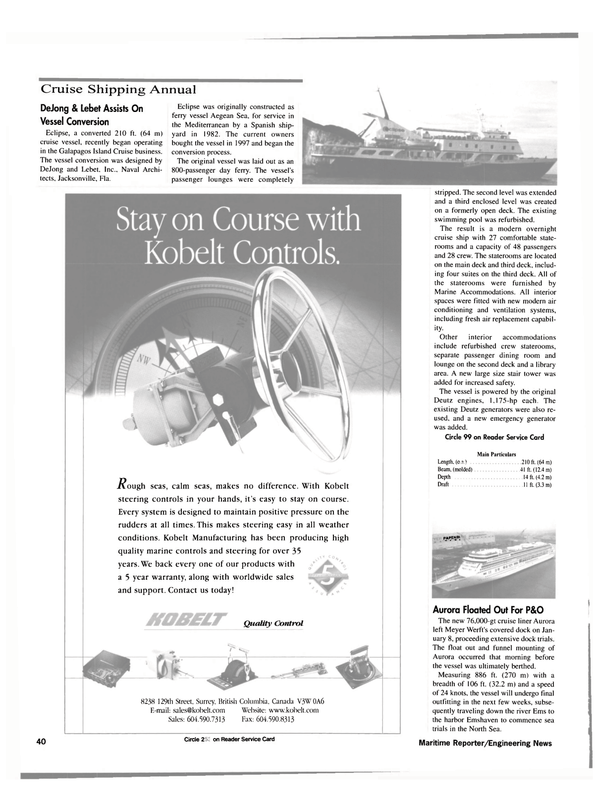