First announced in June 1998 by the company that prides itself on "its growth lying in its past," Cunard Line Limited has plans to construct the world's largest passenger vessel to ever sail the high seas. Scheduled for completion 2003, Queen Mary 2 will measure a record 1,100 ft. (335.2 m).

Cunard's, in its 160 years in business, has embodied classic style. The compa- ny has guaranteed the continuation of this reputation for several decades with the introduction of its Queen Mary 2 project. Rough plans for the vessel were introduced in November, and at press time a contract to build the vessel in a European yard was imminent.

Cunard divulged that the new ship's interiors will be similar to that of White Star Line's Titanic, while its hull will be painted in classic matte black. Boasting a raked prow, reminiscent of the QE 2, the vessel's large red single stack with black bands, will tower 20 stories above its keel. "Project Queen Mary will be the world's most famous ship," said Larry Pimentel, president & CEO of Cunard Line. "The vessel will reflect the golden age of sea travel for those who missed it the first time around." With a deep, narrow draft designed for a smooth ride, the 140,000-hp vessel will be able to move across the sometime harsh conditions of the North Atlantic at speeds of 30 knots.

The original Queen Mary, which was completed in 1936 by John Brown & Co. of Glasgow, produced 160,000-shp for a speed of more than 30 knots. Performing voyages on the Southampton- Cherbourg-New York route, the vessel remained commissioned until 1967, and now operates as a floating museum/hotel in Southern California.

Further singling out Queen Mary 2 as an ocean liner of yesteryear, rather than today's mega cruise ship, it will hold a heritage trail type onboard museum of maritime history, depicting Cunard's accomplishments — such as its significant wartime efforts when QE 2 was requisitioned by the British Government for the Falkland Islands Campaign.

Winds of change The proud company has gone through more corporate change in the last five years than the previous 155 cumulatively, but Pimentel sees the takeover by Carnival and subsequent merge with Seabourn as a saving grace.

"Carnival has brought down our debt significantly, and provided us with one of the greatest balance sheets in recent history," he said.

The Carnival acquisition also allowed Cunard to expand on its current fleet by hiring German shipyard Lloyd Werft to perform a trio of refits for the company. 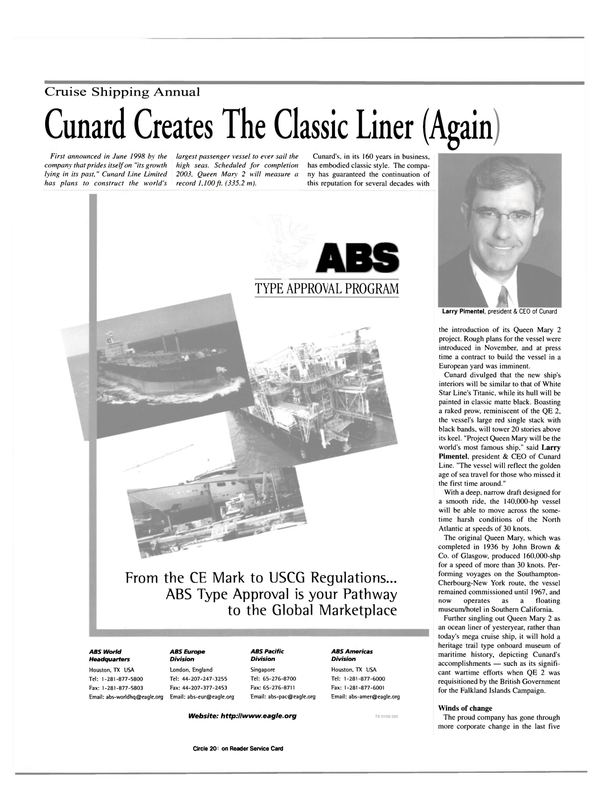