Today's era of stringent environmental policy marvelates that cruise lines must work to achieve good environmental practice. The marine industry in general, the cruise market in particular, have continually worked to project the image of environmental friend. However through high profile cases of negligence and/or abuse, significant new layers of rules and regulations are entering force to ensure shipping companies are truly committed to protecting the valuable environment within which they operation.

Royal Caribbean (RCCL) — following a year in which it was levied record fines of $18 million for its poor environmental practices — has since established a compliance program called Above and Beyond Compliance (ABC) — in addition to its environmentallysound Save The Waves Program. The company also maintains the motto of not discharging any solid waste into the oceans, as well as safely and responsibly disposing of any waste that does remain.

According to RCCL, by the end of 1997, its performance complied with prescribed Safety and Environmental Protection (SEP) and ISO 9002 standards as certified by Det Norske Veritas (DNV). In 1998, RCCL was the first to garner ISO 14001 certification for the environmental management system on its megaclass ships. During that year, the company also tapped former Environmental Protection Agency (EPA) administrator, William K. Reilly on its board of directors to supervise its environmental policies, procedures and research efforts.

According to RCCL, in one month a typical cruise vessel weighing 75,000- tons gathers large quantities of ship stores and/or provisions. Once these items are utilized, the waste that results is then recycled, landed for disposal, incinerated or discharged. Items such as incinerator ash, plastic and photo-chemical waste are ridded ashore; while sludge oil, which is used as fuel com- bustible solids is incinerated at sea, and treated bilge water, grey water and black water are discharged at sea.

The company has made an extended effort to replace many items with those that can be recycled such as paper towels instead of cloth, cellophane-wrapped plastic utensils with reusable, washable plastic or china dishes. RCCL also provides separate trash containers throughout its ships collecting paper, plastic, aluminum cans and glass containers — to begin the controlling of the waste flow.

RCCL maintains to conserve its resources by enlisting various ships' resources to serve two functions. Heat from each vessel's engine is used to preheat water onboard — saving fuel and energy. In addition, condensation running of the ship's air conditioning system is siphoned off to produce water for onboard laundries — thus conserving both fuel and water. All showerheads in ships' cabins are set to lower the flow of fresh water for savings. Equipment used onboard RCCL vessels to accomplish the "Save the Waves" program encompasses a Marinfloc device, which is an advanced cleaning system that purifies bilge water. The system works to lower the oil content of bilge water, in general, to less than five parts per million — much below the 15 ppm international standard. The company has also planned to use General Electric's gas turbines instead of conventional diesel engines on its two, 85,000-ton Vantageclass cruise ships scheduled for a 2001 and 2002 delivery. The utilization of gas turbines will reduce exhaust emissions by 80 to 98 percent, as well as lowering the level of noise and vibration experienced by guests. 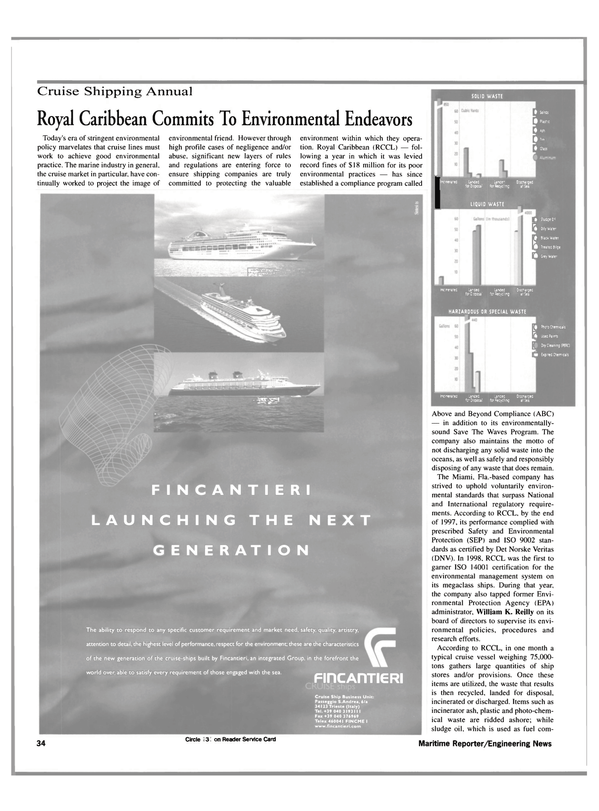