Based in Rauma, Aker Finnyards recent history is indicative of the changes, which continue to sweep the Finnish maritime scene. Finnyards is owned 100 percent by Norwegian interests, part of Aker Yards, an international shipbuilding group comprising Aker Finnyards together with a German and two Norwegian shipyard groups. Aker Yards is owned by Aker RGI. Aker Finnyards' main activities are construction of specialized ships, vessels for oil and gas production and heavy offshore structures. Aker Finnyards' ownership is 100 percent Norwegian, While the shipyard's reign under Norwegian rule is relatively short, its experience and accrued expertise spans many decades and includes more than 1.500 ships built — both long series and extremely demanding one-offs. Deliveries include fast ferries, car-passenger ferries, cruise liners, scientific research vessels, RoRo vessels, ice breakers and naval craft. The yard is also well suited for handling various types of offshore constructions in its huge 853 x 279 ft. (260 x 85 m) drydock, with 300 tons lifting capacity and 600 tons transport capacity. In the graving dock it is possible to build vessels up to 150,000-dwt. Aker Finnyards and the Greek G A Ferries recently signed a letter of intent for the building of a new car-passenger ferry for short international routes and Greek domestic traffic. The LOI also includes an option for another vessel. G A Ferries, which operates 10 vessels, intends to go public in Athens this year.

The company solidified its reputation further in 1999 with delivery of Norstream, a 11,500-dwt RoRo carrier for for Dutch company Bore Stream BV. The vessel runs a regular service between Continental Europe and the UK, on the route Zeebrugge - Teesport, operated by P&O North Sea Ferries.

Designed mainly for transporting trailers, trucks and containers, it is designed for fast loading and unloading, and is equipped with two stern ramps. It measures 590 x 82 ft.

(180 x 25.2 m), and is powered by two medium-speed diesel engines to a speed of 20 knots. Earlier in the year the company demonstrated its naval building prowess with a project to built a fast hovercraft for the Finnish Navy. The joint venture by Aker Finnyards and composite expert FY-Industries won the contract to build the fast hovercraft, to be delivered in September 2001. It is a prototype for a future series of fast combat vessels. The contract involves hovercraft technology transfer to Finland from the U.S. in connection with offset arrangements. The fundamental air cushion vehicle techniques tested in the U.S. will be used to help the designers in Finland to fulfill the requirements of the Finnish Navy for the year-around operation in the harsh coastal conditions. The price of the vessel is more than $12.1 million. 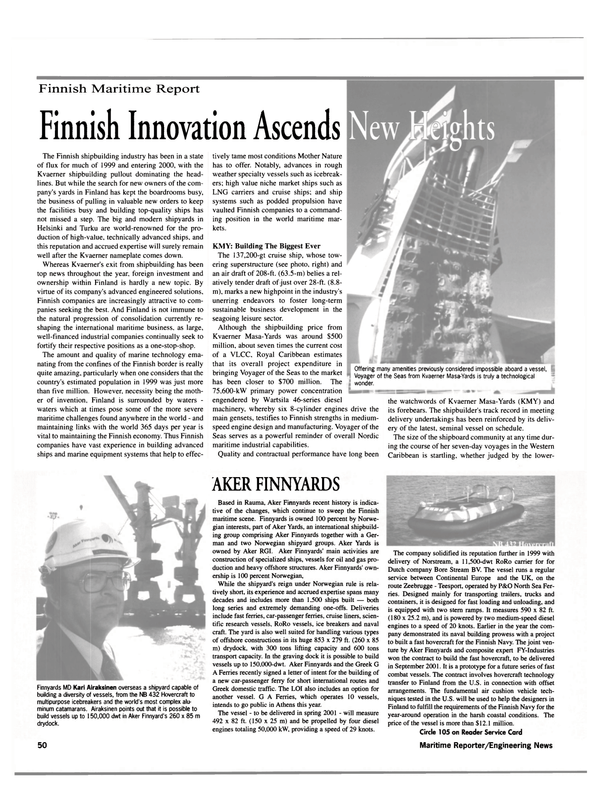