One of the largest annual naval technology trade shows, ASNE Day will address the changing role of the naval engineer in view of the "new world order." The American Society of Naval Engineers (ASNE), which boasts a membership of 7,500 professionals, has assembled a technical program and exhibit show that will focus on "The Naval Engineer's Response to World Change," at the Omni Shoreham Hotel in Washington, D.C., April 29 to May 1, 1992.

Attendance at the three-day event is expected to reach about 3,000.

"This year's program covers all aspects of naval engineering and clearly shows the role the naval engineers will play in the next decade," said Capt. James Grabb, technical director, ASNE, and editor of the Naval Engineer's Journal.

ASNE Day has been evolving over the last few years in response to the The aircraft carrier USS Abraham Lincoln (CVN-72).

needs of members and the challenges of the 1990s amid cuts in defense spending. A prime goal of the show is to provide vital information in order that both naval engineering individuals and defense-related companies can position themselves in the market ASNE Day '92 will kick-off on Thursday, April 30, with a keynote address by ASNE president Jerome J. Fee at 8:30 a.m. Following Mr.

Fee's address, the conference will open with an historical perspective of previous disarmament periods.

The 104-year-old professional society will hold 27 technical presentations, and expects to host over 120 corporate exhibitors as it stresses the changes and responses in the naval engineer's role in the 1990s.

Highlighting the technical program will be papers such as: "Capturing Maintenance and Modernization Efficiencies"; "Solid Waste Management at Sea"; "Propulsion- Powered Electric Guns"; "The SA'AR-5 Design and Construction"; "The Type-23 Frigate"; and "Integration of Ship Control Systems for Total Ship Survivability." The society has also invited Deputy Defense Secretary Donald J. Atwood, as the banquet speaker on Friday, May 1, and Adm. J.

William Kime, USCG, Commanant, as the luncheon speaker on Thursday, April 30. Both plan to address the concerns of and opportunities for naval engineers over the next few years.

ASNE will continue its tradition of presenting its six prestigious awards in recognition for superior achievements in the naval engineering discipline; several volunteer-related service to the society, the best original technical paper published in the Naval Engineers Journal, and its Gold Medal for accomplishments made over the past five years.

The exhibit hall, with over 120 companies represented, will be open 9 a.m. to 5 p.m. both days of the annual meeting at no charge, but those registered will be required to get a name badge at the ASNE registration desk at the Omni Shoreham Hotel prior to touring the hall.

In keeping with the society's forward- looking philosophy, the theme of ASNE DAY 1993, scheduled for May 6-7, will be "Performance vs.

Affordability—Challenge of the Nineties." The society has already issued a call for papers for next year.

For the 1994 show, ASNE plans to move the meeting and exhibition to the Sheraton Washington, Washington, D.C., which will offer the annual event a larger display venue.

3:10 p.m.—"Fracture Mechanics of Ship Structures," by Robert A. Sielski.

3:10 p.m.—"Navy Investigations of HFC-134a as a Replacement for CFC-12 in Shipboard Applications," by Anthony D. Nickens, Gregory P.

9:50 a.m.—"Measures of Effectiveness as Applied to Maintenance Practices," by Mark Elfont and Vincent Procaccino.

10:30 a.m.—"Innovations in Training Simulation," by Robert A. Sottilare and Rodney A.

10:30 a.m.—"Comparison of Shock Test Methods of Mil-S-901 Derived from a Test on a Circuit Breaker and Switchboard," by Thomas L. Bradley Jr., Ted M. Daves, Steven L. McCampbell and John I. Ykema.

9:50 a.m.—"Integration of Ship Control Systems for Total Ship Survivability," by Jospeh B.

10:30 a.m.—"Test of Closed-Loop Degaussing Algorithm on a Minesweeper Engine," by Robert A. Wingo, John J. Holmes and Milton H. Lackey.

7 p.m.—Banquet reception in the Blue Room.

8 p.m.—Annual black-tie banquet in the Regency Ballroom. Presided over by ASNE president Jerome J. Fee, the ASNE Gold Medal and Harold E. Saunders Award will be presented at the banquet.

A banquet address will be given by Donald J. Atwood, Deputy Secretary of Defense. 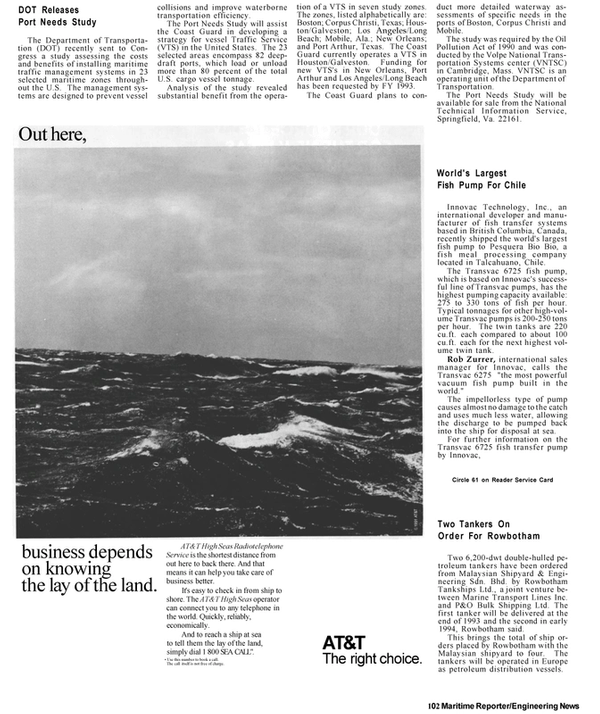 Other stories from April 1992 issue