More than 100 attendees at a recent Marine Machinery Association (MMA) meeting held at the Sheraton Crystal City in Arlington, Va., heard Alabama Congressman Bill Nichols, chairman of the Investigative Subcommittee of the House Committee on Armed Services, discuss the highly sensitive issue of Rights-in-Data. He explained that it was not the intent of Congress to discourage technical innovation of private industry by unilaterally demanding unlimited rights on all procurements. Rather, he said, the rights issue should be examined on each procurement and only where there is significant cost benefit to the Government, such as repeat purchases of large quantities, should the Government purchase the data rights.

George Landberg, president of Warren Pumps Inc., lead off the presentation. The following are excerpts from his remarks.

"The wave of change that has been triggered by the Competition in Contracting Act of 1984, the Defense Procurement Reform Act of 1984, and the Small Business and Federal Procurement Competition Enhancement Act of 1984, as well as the interpretation and implementation that has followed, has dramatically altered the historical industrial intra-structure that has delivered high-quality designs, products, and parts. Historically, manufacturers have provided cradle-to-grave services for products sold to the military For example, Warren Pumps currently maintains drawings, patterns, and tooling for pumps furnished during World War I, and has supplied parts for such equipment during the current year.

"By focusing on one very narrow aspect of a product's total life cycle cost, namely maintenance parts, Congress, with the assistance of the Department of Defense, has begun the process of disassembling the integrated manufacturer who historically has provided the integration of design, prototype development, unit production, parts, repair service, and maintenance of the product's documentation over its planned life.

"I will not argue if the breakup of the OEM's (original equipment manufacturer) role into separate and district procurement steps is in the best interest of the U.S. and our defense establishment. However, if we want to maintain quality through all points of a product's evolution and useful life, we must recognize that the integration responsibility is being removed from the OEM and must be vested elsewhere.

"I do not believe in the short term that the Denfense Department has staff in numbers or by qualification to fill this role, nor have funds been provided to take on this mission. I believe in the long term that the loss of this integrating responsibility without a planned process to replace it represents the greatest threat to maintaining quality. The new approach to procurement, when fully implemented, may actually result in a reduction in quality at greater expense to the Government." He was followed by Rear Adm.

William C. Wyatt III, USN (Ret.) of ADTECH, Inc. Calling on his experience as U.S. Pacific Fleet maintenance officer from 1980 to 1985, he suggested current designs are so performance-driven that they have little margin for error in operation or maintenance. Repair quality in shipyards, both public and private, is not good, with rework of some form approaching 25 percent.

He noted that even though technology has progressed, fleet equipment is slipping farther and farther behind.

Quality parts and services are a must for the fleet, he said.

In his opening remarks, Richard B. McFarland, executive director, acquisition logistics planning support, Navy Ships Parts Control Center, stated that the Navy is better supported now than ever before.

Supply support response time is 10.7 days, down from 14+ days a year ago. Quality control for nuclear and Level 1/Subsafe material is outstanding, but he noted it is nonexistent for other programs. He described the executive level quality assurance group of which he is a key member, as a problem-solving and not merely a policy-making group.

The Navy, he realizes must rely on technical data from OEMs for quality assurance, and he said the offer of the Marine Machinery Association to help QA working groups is most welcomed and accepted.

David M. Cote, newly elected president of Terry Corporation, spoke for the industry, voicing frustration over the dual quality standards wherein OEMs, in parts and service support, must maintain QA systems that meet the rigid requirements of original equipment manufacture, while parts suppliers do not. Competition for after-market business is not a fair and equal competition but in truth is more a reallocation that a completion because of various misinterpretations of the "Congressional mandate." He expressed concern over the serious erosion of quality in parts and services, and forecast an increase in fleet casualty reports.

At the afternoon session, Rear Adm. Thomas M. Hopkins, USNR (Ret.), moderated the panel on Rights-in-Data. Well versed on all facets of the subject, the former NAVSEA deputy commander for engineering skillfully drew out the panelists on all questions.

Ms. Colleen A. Preston, counsel for the Subcommittee on Investigations, House Committee on Armed Services, made it clear that in enacting the recent legislation Congress wanted fair and equitable prices for equipment and services. 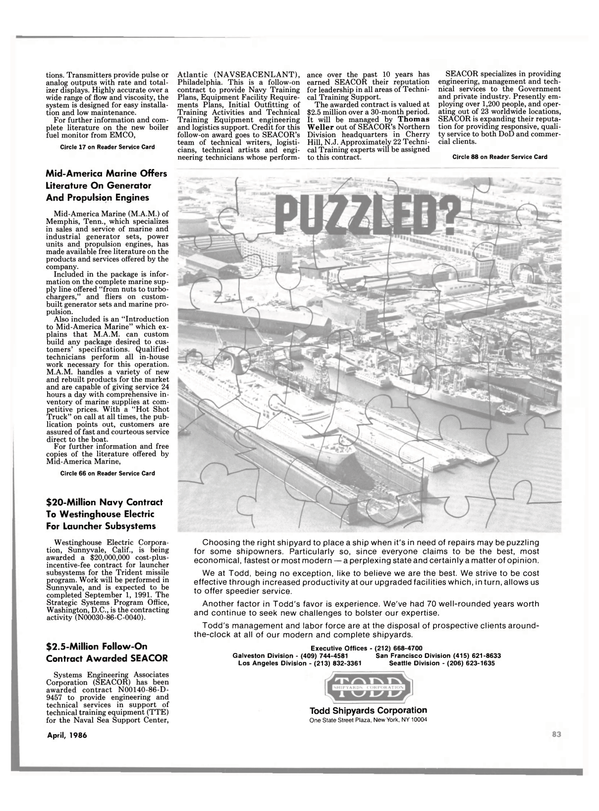 Other stories from April 1986 issue