The Maine shipyard currently has contracts for six Aegis cruisers, and will continue to bid for additional ships of the class. BIW also has been selected by the Navy to design and build the lead ship of the new Aegis guided missile destroyer class, the Arleigh Burke (DDG-51). This ship is scheduled for launching in 1988.

The Aegis cruiser/destroyer program is expected to extend to the turn of the century and perhaps beyond.

Bath Iron Works, a builder of Navy and commercial ships since 1884, looks to the Aegis program to replace the construction activity and employment generated by the Navy's FFG-7 guided missile frigate program that the yard initiated in the early 1970s. After designing and building the lead ship of that class, the Oliver Hazard Perry, BIW secured contracts for 23 additional FFGs. The last of those ships will be delivered this year.

The principal speaker for the Gates launching ceremony was Adm. Elmo R. Zumwalt Jr., who was Chief of Naval Operations when he retired from the Navy in 1974.

Since his retirement, Adm. Zumwalt has remained in the public eye as a spokesman for the maintenance of proper balance of power between the United States and the Soviet Union.

William A. Rehder, supervisor of shipbuilding, conversion and repair, Bath.

Gates left the Pentagon and became president of Morgan Guaranty Trust. In 1965, he became the firm's chairman and chief executive officer.

His widow, Mrs. Anne Gates, served as the ship's sponsor. Her granddaughter, Sarah C. Scott, was maid of honor.

For complete information on all Bath Iron Works facilities and services, Circle 24 on Reader Service Card 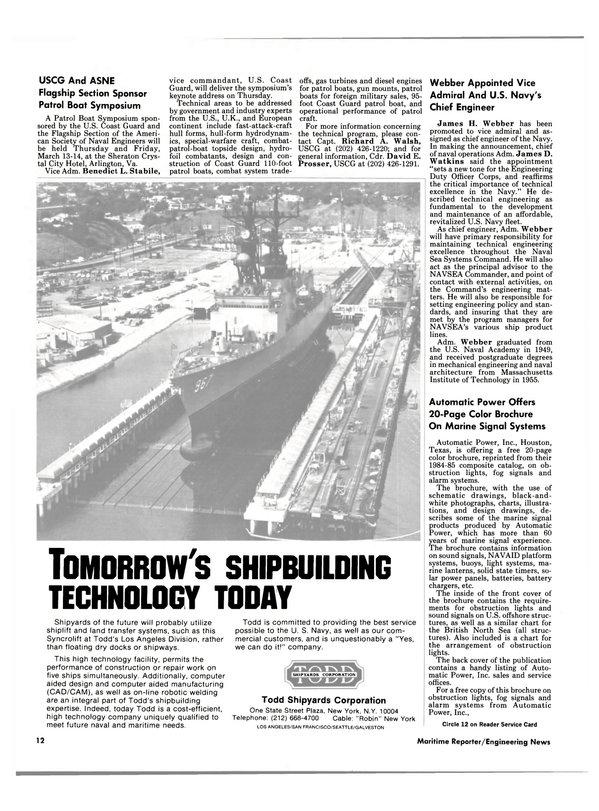