The U.S. Navy's Pacific Fleet received its newest ship, and its second Aegis guided missile cruiser, following the recent commissioning of the USS Valley Forge (CG-50) at the Ingalls Shipbuilding yard in Pascagoula, Miss. Principal speaker at the commissioning ceremony was William H. Taft IV, Deputy Secretary of Defense. He was welcomed to Mississippi by Congressman Trent Lott (D-Miss.).

The Valley Forge is the fourth in a series of Ticonderoga Class cruisers being built by Ingalls. She is equipped with the advanced Aegis weapons system, the most capable shipboard air defense radar and missile system in the world today.

Also participating in the commissioning ceremony were: Adm.

Mrs. Julia Vadala Taft, who served as sponsor of the Valley Forge during her September 1984 christening, also participated in the commissioning ceremony.

The Valley Forge and other ships of the Aegis class, the most important surface shipbuilding program in America today, will provide the primary protection for the Navy's battle forces well into the next century.

Aegis cruisers are big ships— 567 feet long with a beam of 55 feet.

The ship's Aegis weapons system, the heart of her fighting capability, is a significant advance in fleet air defense. Four fixed array radar antennas mounted on the sides of the ship's superstructure replace conventional totaling antennas, enabling the crew to "see" in all directions simultaneously. The Aegis system can simultaneously fire and direct more missiles at more targets, with greater accuracy, than any other system.

As lead shipbuilder for five of the latest classes of Navy surface combatants, Ingalls has delivered 44 complex warships into the Navy Fleet since 1975, more than any other shipyard in the country. The Mississippi shipyard delivered the lead ship of the Aegis cruiser class, the USS Ticonderoga (CG-47), ahead of schedule in 1983. The second ship of the class, the USS Yorktown (CG- 48), joined the Atlantic Fleet abead of schedule in July 1984. The USS Vincennes (CG-49) became the first Pacific Fleet Aegis cruiser following commissioning in July 1985. 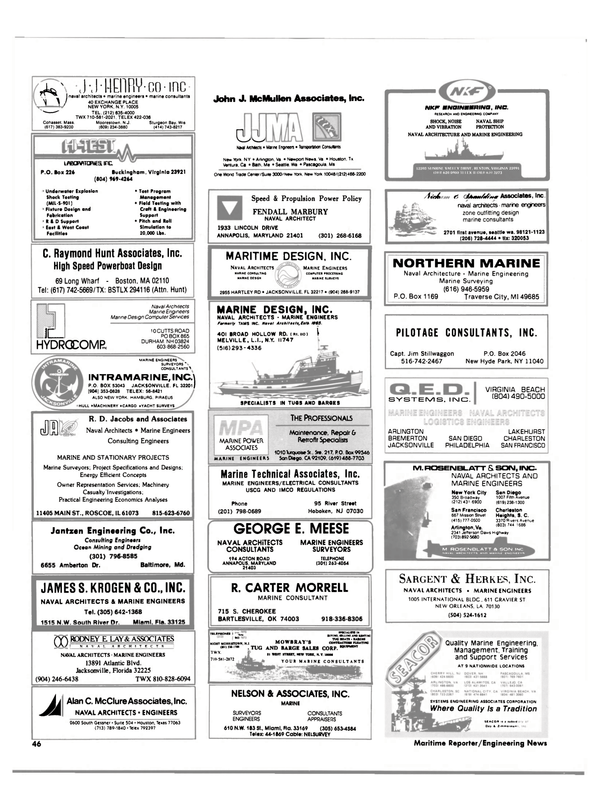