At a reception in New York City, Racal Marine Inc. introduced several new entries in radar and navigation electronics, continuing a new product thrust underway at the company for the past two years. The new products carry the Racal-Decca brand name, one that links the long tradition of Decca with new product innovations of Racal.

The past few decades of maritime history have been fundamentally influenced by the huge impact of navigation electronics, especially radar and positioning systems. A key figure in this history has been Decca, one of the old British names in radar.

During the past few years, the firm has been quietly going about the business of rejuvenating several major lines of business under new British corporate ownership.

four years ago, including part ownership of the American company, ITT-Decca Marine. Since then, Racal has secured complete ownership of the U.S. company. Racal Electronics Pic is a multinational electronics manufacturing company headquartered near London, and is one of the largest makers of nonmilitary marine electronics in the world.

Reflecting the effect of the Racal involvement in Decca operations, the U.S. company was recently renamed Racal Marine Inc. Products are still marketed under the Racal- Decca name.

Since acquiring Decca, several new product developments have been underway. Beginning in 1983, these have been introduced at an accelerating pace. Rather than introducing variations on a single technological theme, Racal has introduced new developments in several areas, each targeted at the unique needs of buyers in the market.

In early 1983, for example, Racal tackled the classic tradeoff between price and performance in smaller commercial class and pleasure boat radars. By combining new design and production technologies, the company was able to introduce a line of 48-mile 5-kw radars (Models 170, 270, 370) reported to be in price ranges previously populated only by shorter range 3-kw radars. As a result, these have become attractive backup radars in several commercial applications.

Racal has also used technological advances to attack the unique business problems of ARPA systems that are becoming mandatory for 10,000+ ton ships over the next four years. Known as Master Radars, the modular design radar system can be started as a 16-inch radar system and upgraded in stages to add AC (Anti-Collision true motion) and ARPA capabilities when needed. Because of the multiple uses of the systems, design and production economies have resulted in a lower priced ARPA system to satisfy iMO minimum standards.

This approach also gives vessel owners more flexibility regarding the best time to upgrade to ARPA.

Racal has also introduced an integrated worldwide navigation system, the MNS (Marine Navigation System) 2000, incorporating Decca Navigator, Omega, Transit Satellite Navigation and Loran C in a single low-cost unit. The system automatically selects the best navigation system for current conditions, and can use one navigation source to update and refine information from others.

The navigation system interfaces with other equipment, such as ARPA systems, autopilots and position plotters, and is designed to be upgraded to add the Global Positioning System when it becomes operational in the latter part of this decade.

Though it's hard to predict future new product developments, and company spokesmen are understandably hesitant to comment publicly on unreleased products, new developments of color raster daylight viewing radar are expected for larger commercial applications. And since one of Racal's corporate strengths is a service network approaching 1,000 locations worldwide, more developments in electronics targeted to the needs of worldwide big ship operators can be expected.

Complete, full-color product literature is available, at no cost, for each of the new units described in this article. For free copies, Circle 17 on Reader Service Card 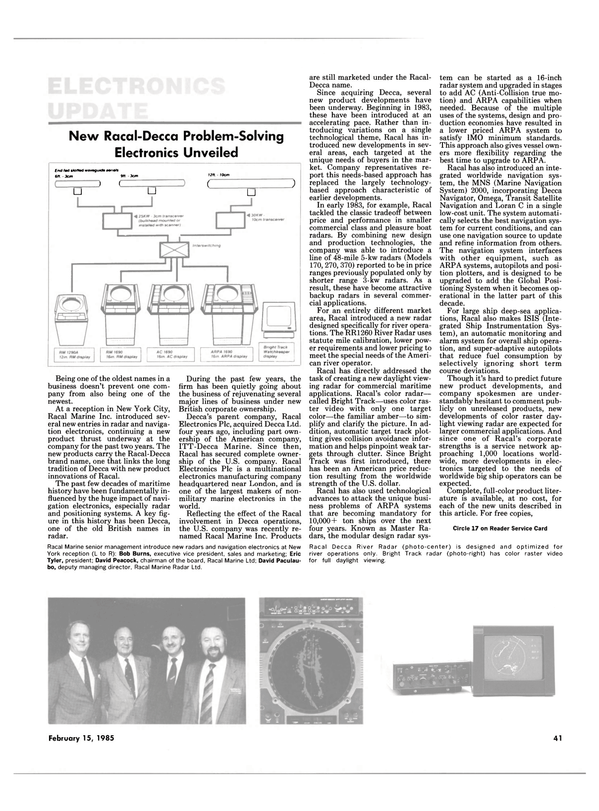