The Apollo One, first oceangoing hazardous waste incinerator ship designed and built in the U.S., was launched at the Tacoma Boatbuilding Company's Yard No. 3 in Tacoma, Wash., recently. The $37- million vessel and a sister ship, the Apollo Two, are being constructed for At-Sea Incineration, Inc. (ASI) of Port Newark, N.J., a wholly owned subsidiary of Tacoma Boat.

Built with the aid of Federal Title XI loan guarantees, these ships have been designed to meet all existing environmental and safety standards of the U.S. Coast Guard, the Environmental Protection Agency, the Maritime Administration, and the National Bureau of Standards, among others, and are the first of their kind to meet the criteria of the American Bureau of Shipping.

The Apollo One can safely destroy up to 30 million gallons of hazardous waste each year. She is the first in a fleet of ships that ASI will operate at Federally approved ocean burn sites. The currently approved site is in the Gulf of Mexico near Cameron, La.; the other, whose approval is expected shortly, is in the Atlantic Ocean.

The launch of Apollo One culminates years of cooperative effort among international regulatory agencies, the Federal Government, and private industry to develop an environmentally acceptable alternative to the inadequate and often dangerous hazardous waste disposal methods of the past.

Classed by the American Bureau of Shipping as + A1 E Chemical Carrier, +AMS, +ACCU, + IS, the Apollo One is designed with accommodations forward, chemical waste cargo tanks amidships, and propulsion and incineration machinery aft. A forecastle deck is provided forward and a poop deck aft.

Twelve integral cargo tanks are located to comply with requirements for a Type II cargo containment system. A pipe trunk is provided on center line throughout the length of the cargo space and from the inner bottom to the main deck. Transverse cofferdams are installed between cargo tanks.

Ballast tanks are located outboard of the cargo tanks, in the double bottom space, and deep tanks for- ward and aft. Fuel oil tanks are provided aft and fresh water tanks forward.

The vessel has an overall length of 396 feet, molded beam of 60 feet, molded depth of 31 feet, and design full-load draft of 23 feet 6 inches. Deadweight a full-load draft is 7,317 tons. Liquid cargo capacity (100 percent full) is 197,730 cubic feet. Accommodations, berthing, messing, and lounges are provided forward for a total complement of 25 persons. The wheelhouse and radio rooms are also forward. A cargo pump room is located aft of the cargo space, with access to the main deck. Two Flume stabilization tanks are fitted above the cargo pump room. 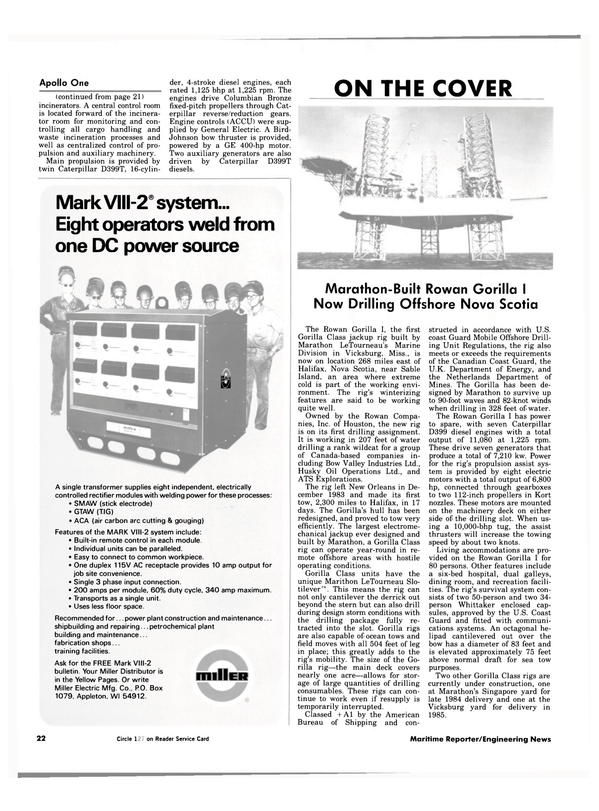 Other stories from April 1984 issue