A $121-million contract for the construction of the first Gulfspanclass ferry for service between Port aux Basques, Newfoundland, and North Sydney, Nova Scotia, was signed recently by the presidents of CN Marine and Davie Shipbuilding of Lauzon, Quebec, Canada.

The largest ship ever designed for the service, the new ferry will be 179 meters (574 feet) in overall length, with a loaded displacement of 15,300 tons. An installed horsepower of 28,000 will permit a maximum service speed of 22 knots. Combined with fast loading and unloading capability, this will allow the new ferry to make two return crossings daily during peak traffic periods. For most of the year she will cruise at a more fuel-efficient 16 knots.

"This ship will offer a wide range of amenities to the traveling public," said CN Marine president Rupert Tingley. "It will feature improved seating and more sleeping accommodation. We will be introducing new concepts in catering, and offering new facil- ities for entertainment and passenger convenience." The vessel will have a capacity to comfortably accommodate 1,200 passengers in daytime service and 800 on night crossings.

The vehicle decks will be able to take up to 350 automobiles or 93 tractor-trailers in varying combinations.

Auto capacity could be increased as traffic warrants by the addition of mezzanine decks.

Canadian naval architects German and Milne of Montreal developed the design, assisted by Knud E. Hansen of Copenhagen, Denmark. During the design process, consideration was given to the harbor at Port aux Basques.

It is not large and, on occasion, experiences adverse wind conditions.

A series of computer simulation tests at the Danish National Laboratory were arranged whereby a number of CN Marine captains performed docking maneuvers with this design under a variety of conditions.

The results demonstrated that, with the appropriate thrusters installed, the vessel would be able to dock in Port aux Basques as easily as the existing fleet.

The Gulfspan is designed with a bulbous bow, split stern, and large propellers to obtain maximum speed from minimum fuel.

A series of ice-tank tests were undertaken, using a one-fortieth scale model of the Gulfspan hull in ice of varying thicknesses. The object was to determine how the actual ship would^perform in the conditions likely to be encountered in the Cabot Strait, and whether any potential modifications were needed to improve this, without compromising on the ship's efficiency in open water.

Gulfspan will be capable of a 45-minute t u r n a r o u n d , about three times as fast as the ferries now in service. It will require considerable change in the way things are done at the terminals.

For example, larger fuel and water lines will be needed as well as instituting a container system to bring stores aboard, and refuse and laundry ashore. The biggest innovation will be the traffic handling and loading system.

Two levels will load simultaneously, with two lanes of traffic on each ramp. This will require the construction of a new dock and bi-level loading facility at North Sydney. The new dock at Port aux Basques was designed for the new ferry, and is to be equipped with an upper level loading ramp.

The Port aux Basques project also included a new and expanded traffic marshaling area, and a similar expansion is planned for North Sydney. 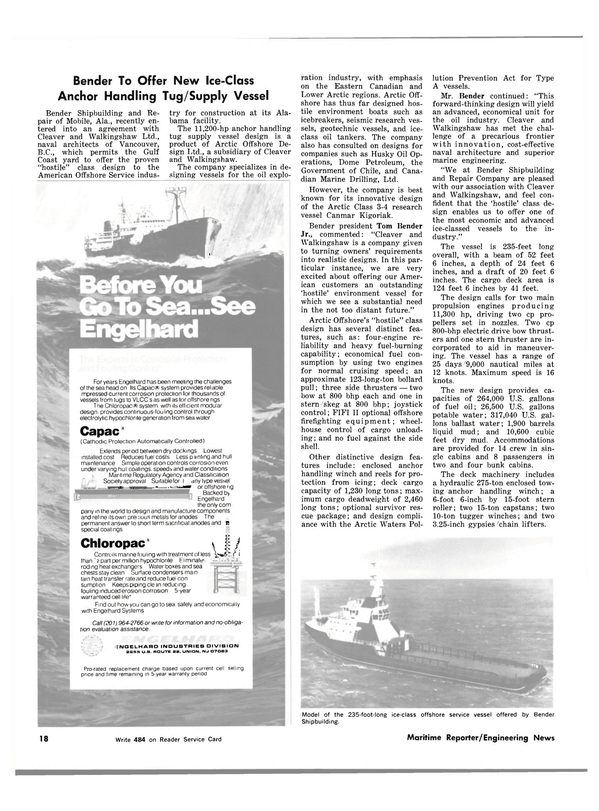 Other stories from March 1983 issue