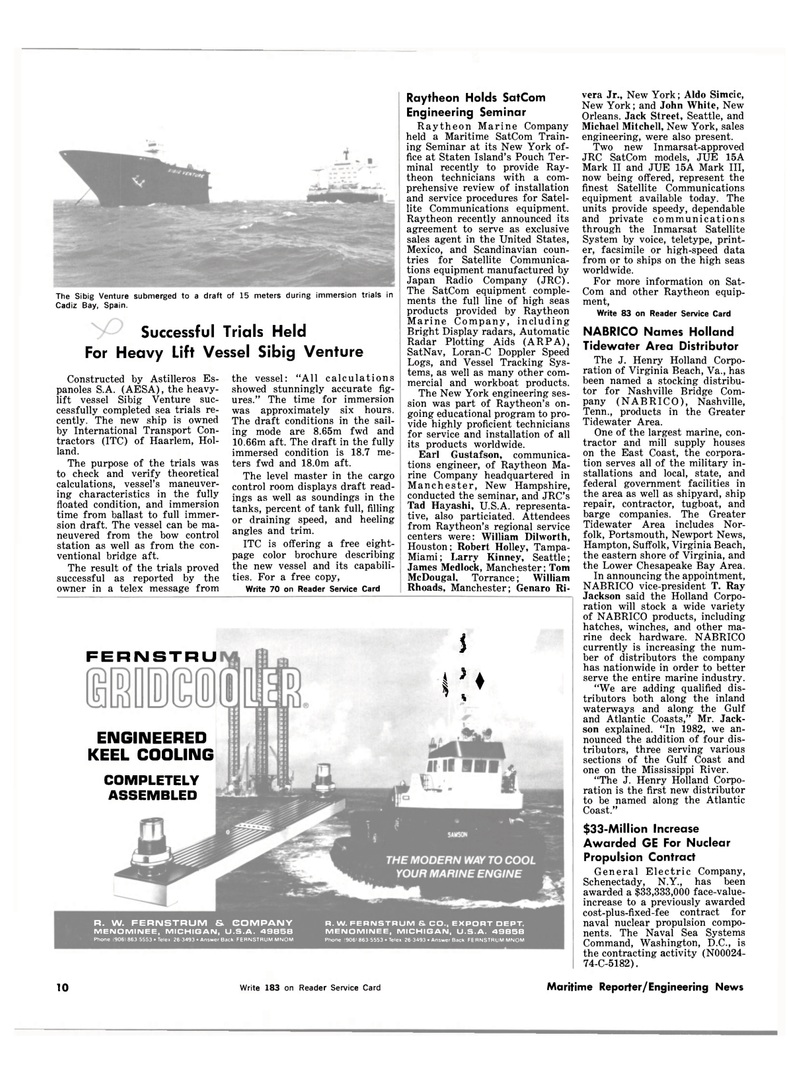 The purpose of the trials was to check and verify theoretical calculations, vessel's maneuver- ing characteristics in the fully floated condition, and immersion time from ballast to full immer- sion draft. The vessel can be ma- neuvered from the bow control station as well as from the con- ventional bridge aft.

The level master in the cargo control room displays draft read- ings as well as soundings in the tanks, percent of tank full, filling or draining speed, and heeling angles and trim.

ITC is offering a free eight- page color brochure describing the new vessel and its capabili- ties. For a free copy,

Raytheon recently announced its agreement to serve as exclusive sales agent in the United States,

Logs, and Vessel Tracking Sys- tems, as well as many other com- mercial and workboat products.

The New York engineering ses- sion was part of Raytheon's on- going educational program to pro- vide highly proficient technicians for service and installation of all its products worldwide.

System by voice, teletype, print- er, facsimile or high-speed data from or to ships on the high seas worldwide.

For more information on Sat-

Com and other Raytheon equip- ment,

Tenn., products in the Greater

One of the largest marine, con- tractor and mill supply houses on the East Coast, the corpora- tion serves all of the military in- stallations and local, state, and federal government facilities in the area as well as shipyard, ship repair, contractor, tugboat, and barge companies. The Greater

In announcing the appointment,

Jackson said the Holland Corpo- ration will stock a wide variety of NABRICO products, including hatches, winches, and other ma- rine deck hardware. NABRICO currently is increasing the num- ber of distributors the company has nationwide in order to better serve the entire marine industry. "We are adding qualified dis- tributors both along the inland waterways and along the Gulf and Atlantic Coasts," Mr. Jack- son explained. "In 1982, we an- nounced the addition of four dis- tributors, three serving various sections of the Gulf Coast and one on the Mississippi River. "The J. Henry Holland Corpo- ration is the first new distributor to be named along the Atlantic