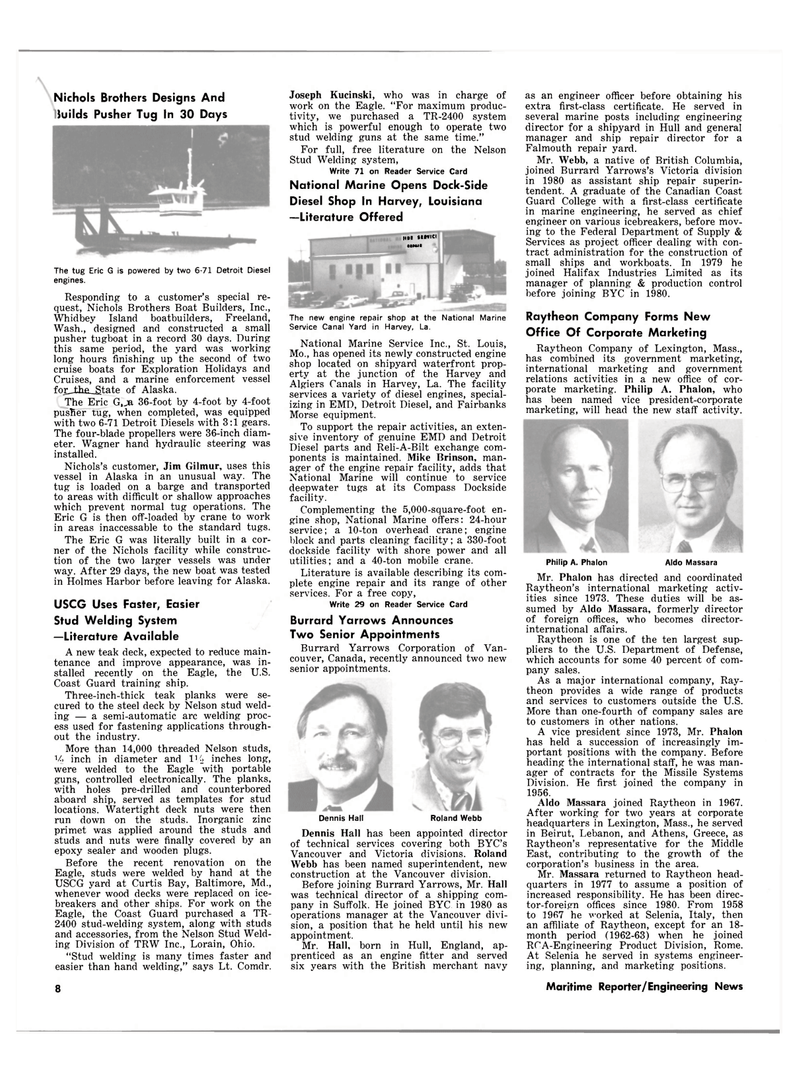 Joseph Kucinski, who was in charge of work on the Eagle. "For maximum produc- tivity, we purchased a TR-2400 system which is powerful enough to operate two stud welding guns at the same time."

For full, free literature on the Nelson

Wash., designed and constructed a small pusher tugboat in a record 30 days. During this same period, the yard was working long hours finishing up the second of two cruise boats for Exploration Holidays and

Cruises, and a marine enforcement vessel fo£_J±L£_State of Alaska.

Nichols's customer, Jim Gilmur, uses this vessel in Alaska in an unusual way. The tug is loaded on a barge and transported to areas with difficult or shallow approaches which prevent normal tug operations. The

Eric G is then off-loaded by crane to work in areas inaccessable to the standard tugs.

The Eric G was literally built in a cor- ner of the Nichols facility while construc- tion of the two larger vessels was under way. After 29 days, the new boat was tested in Holmes Harbor before leaving for Alaska.

A new teak deck, expected to reduce main- tenance and improve appearance, was in- stalled recently on the Eagle, the U.S.

Three-inch-thick teak planks were se- cured to the steel deck by Nelson stud weld- ing — a semi-automatic arc welding proc- ess used for fastening applications through- out the industry.

V, inch in diameter and l1i> inches long, were welded to the Eagle with portable guns, controlled electronically. The planks, with holes pre-drilled and counterbored aboard ship, served as templates for stud locations. Watertight deck nuts were then run down on the studs. Inorganic zinc primet was applied around the studs and studs and nuts were finally covered by an epoxy sealer and wooden plugs.

Before the recent renovation on the

Eagle, studs were welded by hand at the

USCG yard at Curtis Bay, Baltimore, Md., whenever wood decks were replaced on ice- breakers and other ships. For work on the

Eagle, the Coast Guard purchased a TR- 2400 stud-welding system, along with studs and accessories, from the Nelson Stud Weld- ing Division of TRW Inc., Lorain, Ohio. "Stud welding is many times faster and easier than hand welding," says Lt. Comdr.

The new engine repair shop at the National Marine

Mo., has opened its newly constructed engine shop located on shipyard waterfront prop- erty at the junction of the Harvey and

To support the repair activities, an exten- sive inventory of genuine EMD and Detroit

National Marine will continue to service deepwater tugs at its Compass Dockside facility.

Literature is available describing its com- plete engine repair and its range of other services. For a free copy,

Webb has been named superintendent, new construction at the Vancouver division.

Before joining Burrard Yarrows, Mr. Hall was technical director of a shipping com- pany in Suffolk. He joined BYC in 1980 as operations manager at the Vancouver divi- sion, a position that he held until his new appointment.

Mr. Hall, born in Hull, England, ap- prenticed as an engine fitter and served six years with the British merchant navy as an engineer officer before obtaining his extra first-class certificate. He served in several marine posts including engineering director for a shipyard in Hull and general manager and ship repair director for a

Guard College with a first-class certificate in marine engineering, he served as chief engineer on various icebreakers, before mov- ing to the Federal Department of Supply &

Services as project officer dealing with con- tract administration for the construction of small ships and workboats. In 1979 he joined Halifax Industries Limited as its manager of planning & production control before joining BYC in 1980.

Raytheon Company of Lexington, Mass., has combined its government marketing, international marketing and government relations activities in a new office of cor- porate marketing. Philip A. Phalon, who has been named vice president-corporate marketing, will head the new staff activity.

Mr. Phalon has directed and coordinated

Raytheon's international marketing activ- ities since 1973. These duties will be as- sumed by Aldo Massara, formerly director of foreign offices, who becomes director- international affairs.

Raytheon is one of the ten largest sup- pliers to the U.S. Department of Defense, which accounts for some 40 percent of com- pany sales.

As a major international company, Ray- theon provides a wide range of products and services to customers outside the U.S.

More than one-fourth of company sales are to customers in other nations.

A vice president since 1973, Mr. Phalon has held a succession of increasingly im- portant positions with the company. Before heading the international staff, he was man- ager of contracts for the Missile Systems

Division. He first joined the company in 1956.

After working for two years at corporate headquarters in Lexington, Mass., he served in Beirut, Lebanon, and Athens, Greece, as

Raytheon's representative for the Middle

East, contributing to the growth of the corporation's business in the area.

Mr. Massara returned to Raytheon head- quarters in 1977 to assume a position of increased responsibility. He has been direc- tor-foreipn offices since 1980. From 1958 to 1967 he worked at Selenia, Italy, then an affiliate of Raytheon, except for an 18- month period (1962-63) when he joined