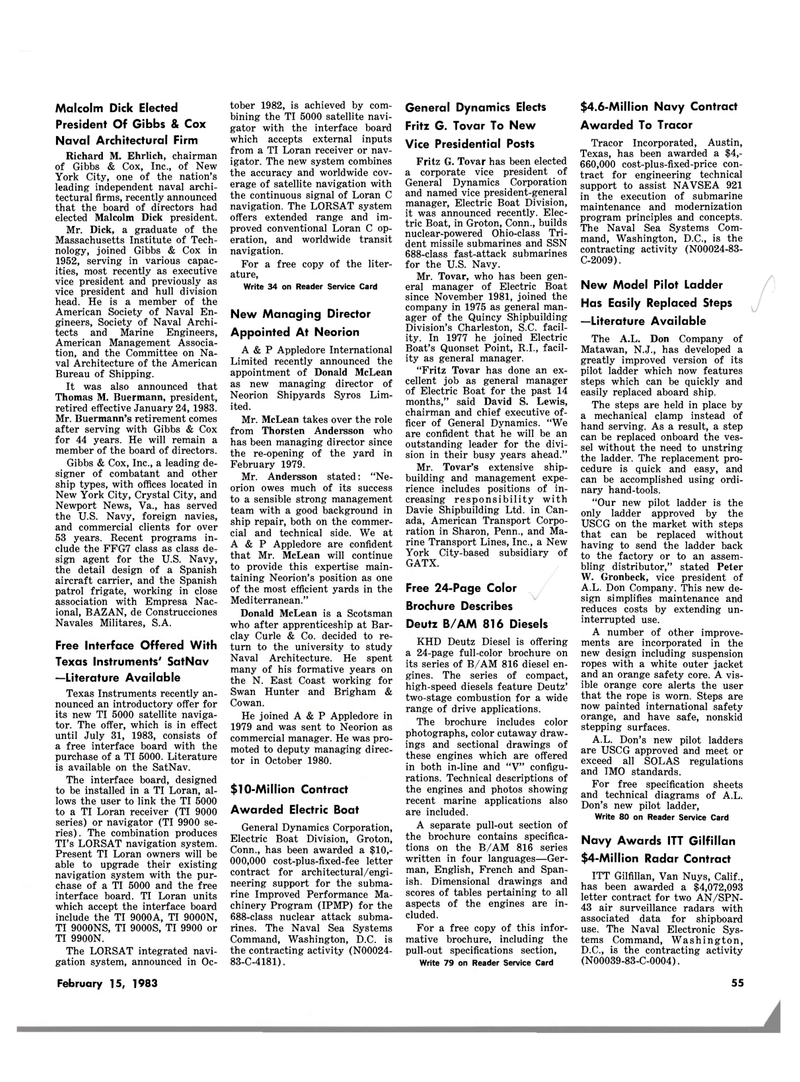 York City, one of the nation's leading independent naval archi- tectural firms, recently announced that the board of directors had elected Malcolm Dick president.

Mr. Dick, a graduate of the

American Management Associa- tion, and the Committee on Na- val Architecture of the American

It was also announced that

Mr. Buermann's retirement comes after serving with Gibbs & Cox for 44 years. He will remain a member of the board of directors.

Gibbs & Cox, Inc., a leading de- signer of combatant and other ship types, with offices located in

Newport News, Va., has served the U.S. Navy, foreign navies, and commercial clients for over 53 years. Recent programs in- clude the FFG7 class as class de- sign agent for the U.S. Navy, the detail design of a Spanish aircraft carrier, and the Spanish patrol frigate, working in close association with Empresa Nac- ional, BAZAN, de Construcciones

Texas Instruments recently an- nounced an introductory offer for its new TI 5000 satellite naviga- tor. The offer, which is in effect until July 31, 1983, consists of a free interface board with the purchase of a TI 5000. Literature is available on the SatNav.

The interface board, designed to be installed in a TI Loran, al- lows the user to link the TI 5000 to a TI Loran receiver (TI 9000 series) or navigator (TI 9900 se- ries) . The combination produces

Present TI Loran owners will be able to upgrade their existing navigation system with the pur- chase of a TI 5000 and the free interface board. TI Loran units which accept the interface board include the TI 9000A, TI 9000N,

For a free copy of the liter- ature,

Mr. McLean takes over the role from Thorsten Andersson who has been managing director since the re-opening of the yard in

Mr. Andersson stated: "Ne- orion owes much of its success to a sensible strong management team with a good background in ship repair, both on the commer- cial and technical side. We at

A & P Appledore are confident that Mr. McLean will continue to provide this expertise main- taining Neorion's position as one of the most efficient yards in the

Donald McLean is a Scotsman who after apprenticeship at Bar- clay Curie & Co. decided to re- turn to the university to study

Naval Architecture. He spent many of his formative years on the N. East Coast working for

He joined A & P Appledore in 1979 and was sent to Neorion as commercial manager. He was pro- moted to deputy managing direc- tor in October 1980. $10-Million Contract

Fritz G. Tovar has been elected a corporate vice president of

Mr. Tovar, who has been gen- eral manager of Electric Boat since November 1981, joined the company in 1975 as general man- ager of the Quincy Shipbuilding

Boat's Quonset Point, R.I., facil- ity as general manager. "Fritz Tovar has done an ex- cellent job as general manager of Electric Boat for the past 14 months," said David S. Lewis, chairman and chief executive of- ficer of General Dynamics. "We are confident that he will be an outstanding leader for the divi- sion in their busy years ahead."

The brochure includes color photographs, color cutaway draw- ings and sectional drawings of these engines which are offered in both in-line and "V" configu- rations. Technical descriptions of the engines and photos showing recent marine applications also are included.

A separate pull-out section of the brochure contains specifica- tions on the B/AM 816 series written in four languages—Ger- man, English, French and Span- ish. Dimensional drawings and scores of tables pertaining to all aspects of the engines are in- cluded.

For a free copy of this infor- mative brochure, including the pull-out specifications section,

Texas, has been awarded a $4,- 660,000 cost-plus-fixed-price con- tract for engineering technical support to assist NAVSEA 921 in the execution of submarine maintenance and modernization program principles and concepts.

The A.L. Don Company of

Matawan, N.J., has developed a greatly improved version of its pilot ladder which now features steps which can be quickly and easily replaced aboard ship.

The steps are held in place by a mechanical clamp instead of hand serving. As a result, a step can be replaced onboard the ves- sel without the need to unstring the ladder. The replacement pro- cedure is quick and easy, and can be accomplished using ordi- nary hand-tools. "Our new pilot ladder is the only ladder approved by the

USCG on the market with steps that can be replaced without having to send the ladder back to the factory or to an assem- bling distributor," stated Peter

A number of other improve- ments are incorporated in the new design including suspension ropes with a white outer jacket and an orange safety core. A vis- ible orange core alerts the user that the rope is worn. Steps are now painted international safety orange, and have safe, nonskid stepping surfaces.

For free specification sheets and technical diagrams of A.L.