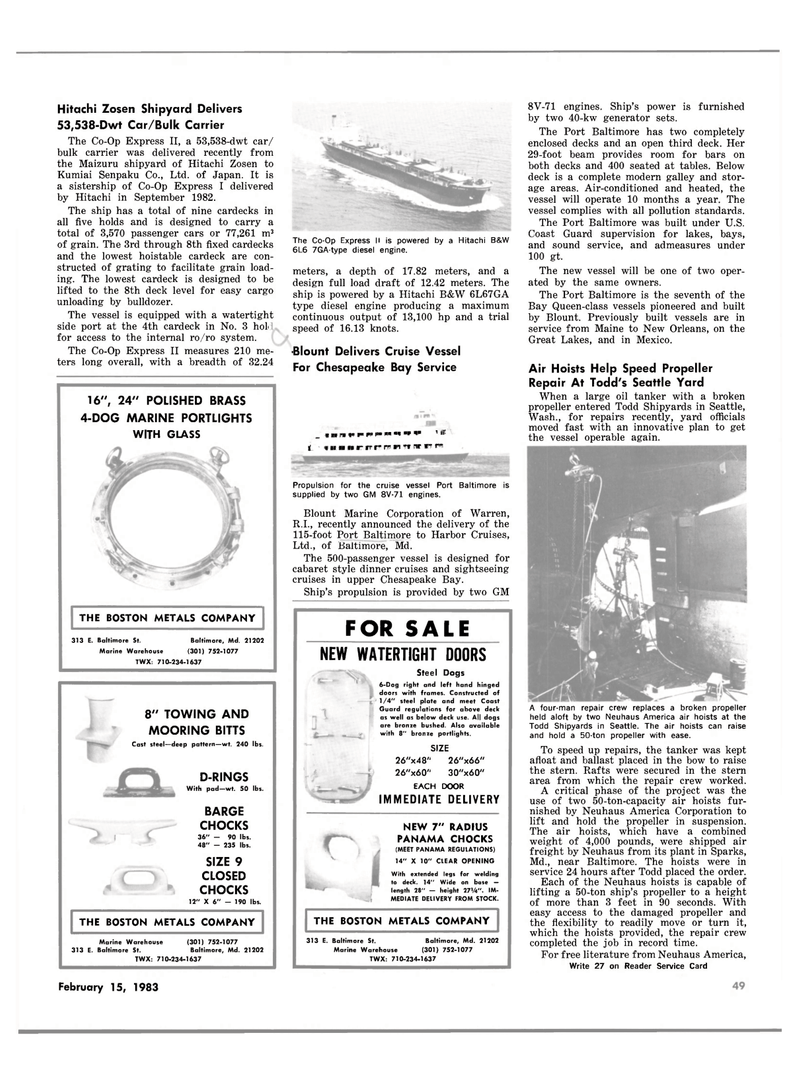 The Co-Op Express II, a 53,538-dwt car/ bulk carrier was delivered recently from the Maizuru shipyard of Hitachi Zosen to

Kumiai Senpaku Co., Ltd. of Japan. It is a sistership of Co-Op Express I delivered by Hitachi in September 1982.

The ship has a total of nine cardecks in all five holds and is designed to carry a total of 3,570 passenger cars or 77,261 m3 of grain. The 3rd through 8th fixed cardecks and the lowest hoistable cardeck are con- structed of grating to facilitate grain load- ing. The lowest cardeck is designed to be lifted to the 8th deck level for easy cargo unloading by bulldozer.

The vessel is equipped with a watertight side port at the 4th cardeck in No. 3 hol< for access to the internal ro/ro system.

R.I., recently announced the delivery of the 115-foot Port Baltimore to Harbor Cruises,

Guard regulations for above deck as well as below deck use. All dogs are bronze bushed. Also available with 8" bronze portlights.

The Port Baltimore has two completely enclosed decks and an open third deck. Her 29-foot beam provides room for bars on both decks and 400 seated at tables. Below deck is a complete modern galley and stor- age areas. Air-conditioned and heated, the vessel will operate 10 months a year. The vessel complies with all pollution standards.

The Port Baltimore was built under U.S.

Coast Guard supervision for lakes, bays, and sound service, and admeasures under 100 gt.

The new vessel will be one of two oper- ated by the same owners.

The Port Baltimore is the seventh of the

Bay Queen-class vessels pioneered and built by Blount. Previously built vessels are in service from Maine to New Orleans, on the

Great Lakes, and in Mexico.

When a large oil tanker with a broken propeller entered Todd Shipyards in Seattle,

Wash., for repairs recently, yard officials moved fast with an innovative plan to get the vessel operable again.

Todd Shipyards in Seattle. The air hoists can raise and hold a 50-ton propeller with ease.

To speed up repairs, the tanker was kept afloat and ballast placed in the bow to raise the stern. Rafts were secured in the stern area from which the repair crew worked.

A critical phase of the project was the use of two 50-ton-capacity air hoists fur- nished by Neuhaus America Corporation to lift and hold the propeller in suspension.

The air hoists, which have a combined weight of 4,000 pounds, were shipped air freight by Neuhaus from its plant in Sparks,

Md., near Baltimore. The hoists were in service 24 hours after Todd placed the order.

Each of the Neuhaus hoists is capable of lifting a 50-ton ship's propeller to a height of more than 3 feet in 90 seconds. With easy access to the damaged propeller and the flexibility to readily move or turn it, which the hoists provided, the repair crew completed the job in record time.

For free literature from Neuhaus America,