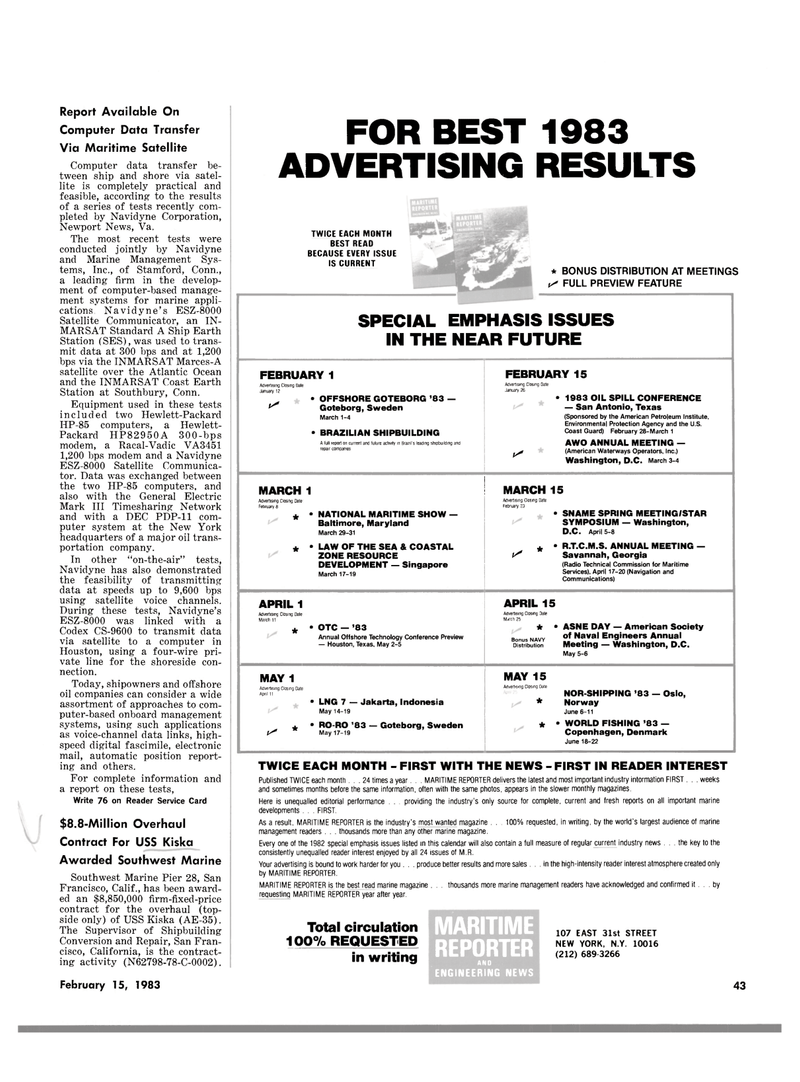 Computer data transfer be- tween ship and shore via satel- lite is completely practical and feasible, according to the results of a series of tests recently com- pleted by Navidyne Corporation,

The most recent tests were conducted jointly by Navidyne and Marine Management Sys- tems, Inc., of Stamford, Conn., a leading firm in the develop- ment of computer-based manage- ment systems for marine appli- cations' Navidyne's ESZ-8000

Satellite Communicator, an IN-

Station (SES), was used to trans- mit data at 300 bps and at 1,200 bps via the INMARSAT Marces-A satellite over the Atlantic Ocean and the INMARSAT Coast Earth

ESZ-8000 Satellite Communica- tor. Data was exchanged between the two HP-85 computers, and also with the General Electric

In other "on-the-air" tests,

Navidyne has also demonstrated the feasibility of transmitting data at speeds up to 9,600 bps using satellite voice channels.

For complete information and a report on these tests,

The Supervisor of Shipbuilding

IN THE NEAR FUTURE

Environmental Protection Agency and the U.S.

TWICE EACH MONTH - FIRST WITH THE NEWS - FIRST IN READER INTEREST

Published TWICE each month . . . 24 times a year. . . MARITIME REPORTER delivers the latest and most important industry intormation FIRST , . .weeks and sometimes months before the same information, often with the same photos, appears in the slower monthly magazines.

Here is unequalled editorial performance . providing the industry's only source for complete, current and fresh reports on all important marine developments . . . FIRST.

As a result, MARITIME REPORTER is the industry's most wanted magazine . . . 100% requested, in writing, by the world's largest audience of marine management readers . . . thousands more than any other marine magazine.

Every one of the 1982 special emphasis issues listed in this calendar will also contain a full measure of regular current industry news ... the key to the consistently unequalled reader interest enjoyed by all 24 issues of M.R.

Your advertising is bound to work harder for you . . . produce better results and more sales . . in the high-intensity reader interest atmosphere created only by MARITIME REPORTER.