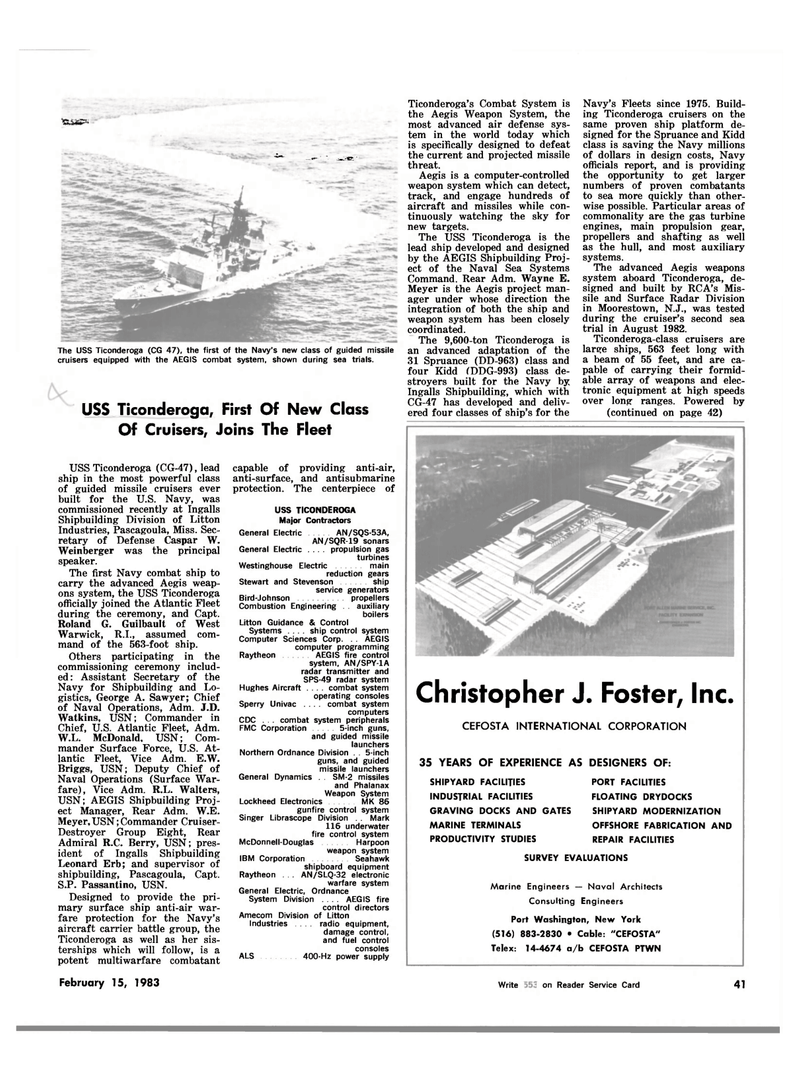 The USS Ticonderoga (CG 47), the first of the Navy's new class of guided missile cruisers equipped with the AEGIS combat system, shown during sea trials.

Of Cruisers, Joins The Fleet

USS Ticonderoga (CG-47), lead ship in the most powerful class of guided missile cruisers ever built for the U.S. Navy, was commissioned recently at Ingalls

Weinberger was the principal speaker.

The first Navy combat ship to carry the advanced Aegis weap- ons system, the USS Ticonderoga officially joined the Atlantic Fleet during the ceremony, and Capt.

Others participating in the commissioning ceremony includ- ed : Assistant Secretary of the

Ticonderoga as well as her sis- terships which will follow, is a potent multiwarfare combatant capable of providing anti-air, anti-surface, and antisubmarine protection. The centerpiece of

Ticonderoga's Combat System is the Aegis Weapon System, the most advanced air defense sys- tem in the world today which is specifically designed to defeat the current and projected missile threat.

Aegis is a computer-controlled weapon system which can detect, track, and engage hundreds of aircraft and missiles while con- tinuously watching the sky for new targets.

Meyer is the Aegis project man- ager under whose direction the integration of both the ship and weapon system has been closely coordinated.

The 9,600-ton Ticonderoga is an advanced adaptation of the 31 Spruance (DD-963) class and four Kidd (DDG-993) class de- stroyers built for the Navy by

Ingalls Shipbuilding, which with

Navy's Fleets since 1975. Build- ing Ticonderoga cruisers on the same proven ship platform de- signed for the Spruance and Kidd class is saving the Navy millions of dollars in design costs, Navy officials report, and is providing the opportunity to get larger numbers of proven combatants to sea more quickly than other- wise possible. Particular areas of commonality are the gas turbine engines, main propulsion gear, propellers and shafting as well as the hull, and most auxiliary systems.

The advanced Aegis weapons system aboard Ticonderoga, de- signed and built by RCA's Mis- sile and Surface Radar Division in Moorestown, N.J., was tested during the cruiser's second sea trial in August 1982.

Ticonderoga-class cruisers are large ships, 563 feet long with a beam of 55 feet, and are ca- pable of carrying their formid- able array of weapons and elec- tronic equipment at high speeds over long ranges. Powered by (continued on page 42)

CEFOSTA INTERNATIONAL CORPORATION 35 YEARS OF EXPERIENCE AS DESIGNERS OF: