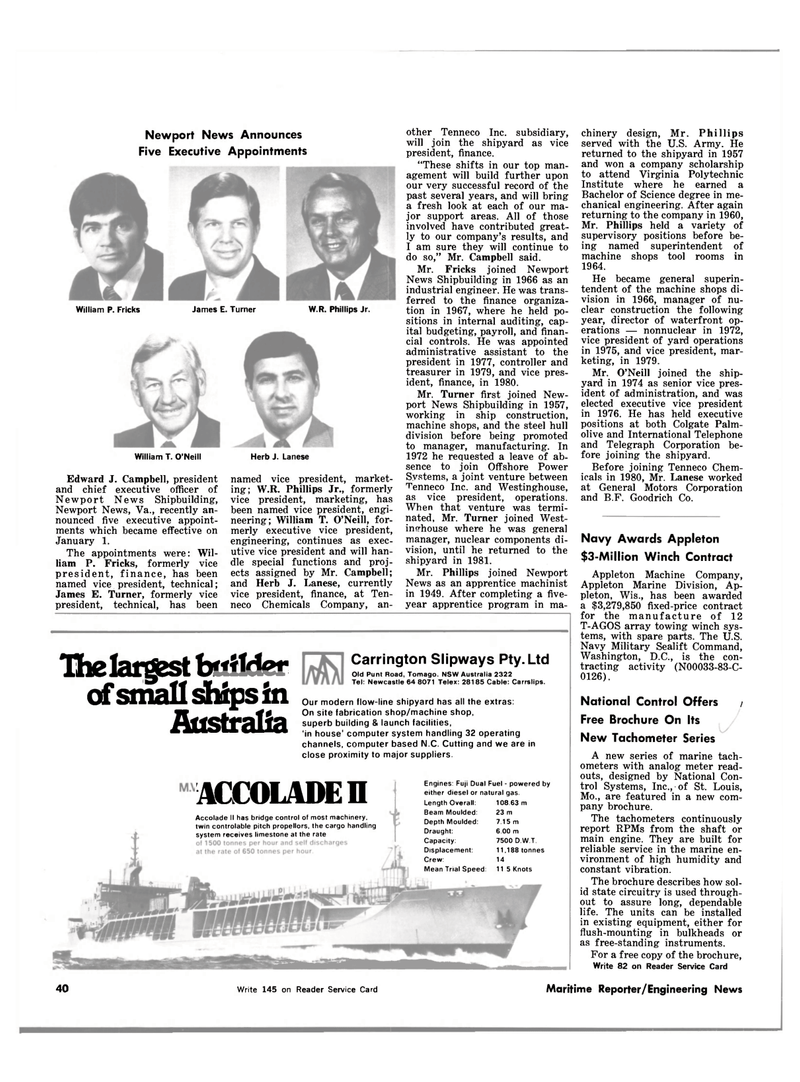 other Tenneco Inc. subsidiary, will join the shipyard as vice president, finance. "These shifts in our top man- agement will build further upon our very successful record of the past several years, and will bring a fresh look at each of our ma- jor support areas. All of those involved have contributed great- ly to our company's results, and

I am sure they will continue to do so," Mr. Campbell said.

News Shipbuilding in 1966 as an industrial engineer. He was trans- ferred to the finance organiza- tion in 1967, where he held po- sitions in internal auditing, cap- ital budgeting, payroll, and finan- cial controls. He was appointed administrative assistant to the president in 1977, controller and treasurer in 1979, and vice pres- ident, finance, in 1980.

Mr. Turner first joined New- port News Shipbuilding in 1957, working in ship construction, machine shops, and the steel hull division before being promoted to manager, manufacturing. In 1972 he requested a leave of ab- sence to join Offshore Power

Systems, a joint venture between

When that venture was termi- nated, Mr. Turner joined West- infrhouse where he was general manager, nuclear components di- vision, until he returned to the shipyard in 1981.

News as an apprentice machinist in 1949. After completing a five- year apprentice program in ma-

The largest builder of small ships in

Our modern flow-line shipyard has all the extras:

On site fabrication shop/machine shop, superb building & launch facilities, 'in house' computer system handling 32 operating channels, computer based N.C. Cutting and we are in close proximity to major suppliers. chinery design, Mr. Phillips served with the U.S. Army. He returned to the shipyard in 1957 and won a company scholarship to attend Virginia Polytechnic

Institute where he earned a

Bachelor of Science degree in me- chanical engineering. After again returning to the company in 1960,

Mr. Phillips held a variety of supervisory positions before be- ing named superintendent of machine shops tool rooms in 1964.

He became general superin- tendent of the machine shops di- vision in 1966, manager of nu- clear construction the following year, director of waterfront op- erations — nonnuclear in 1972, vice president of yard operations in 1975, and vice president, mar- keting, in 1979.

Mr. O'Neill joined the ship- yard in 1974 as senior vice pres- ident of administration, and was elected executive vice president in 1976. He has held executive positions at both Colgate Palm- olive and International Telephone and Telegraph Corporation be- fore joining the shipyard.

Appleton Marine Division, Ap- pleton, Wis., has been awarded a $3,279,850 fixed-price contract for the manufacture of 12

Free Brochure On Its

Mo., are featured in a new com- pany brochure.

The tachometers continuously report RPMs from the shaft or main engine. They are built for reliable service in the marine en- vironment of high humidity and constant vibration.

The brochure describes how sol- id state circuitry is used through- out to assure long, dependable life. The units can be installed in existing equipment, either for flush-mounting in bulkheads or as free-standing instruments.

For a free copy of the brochure,