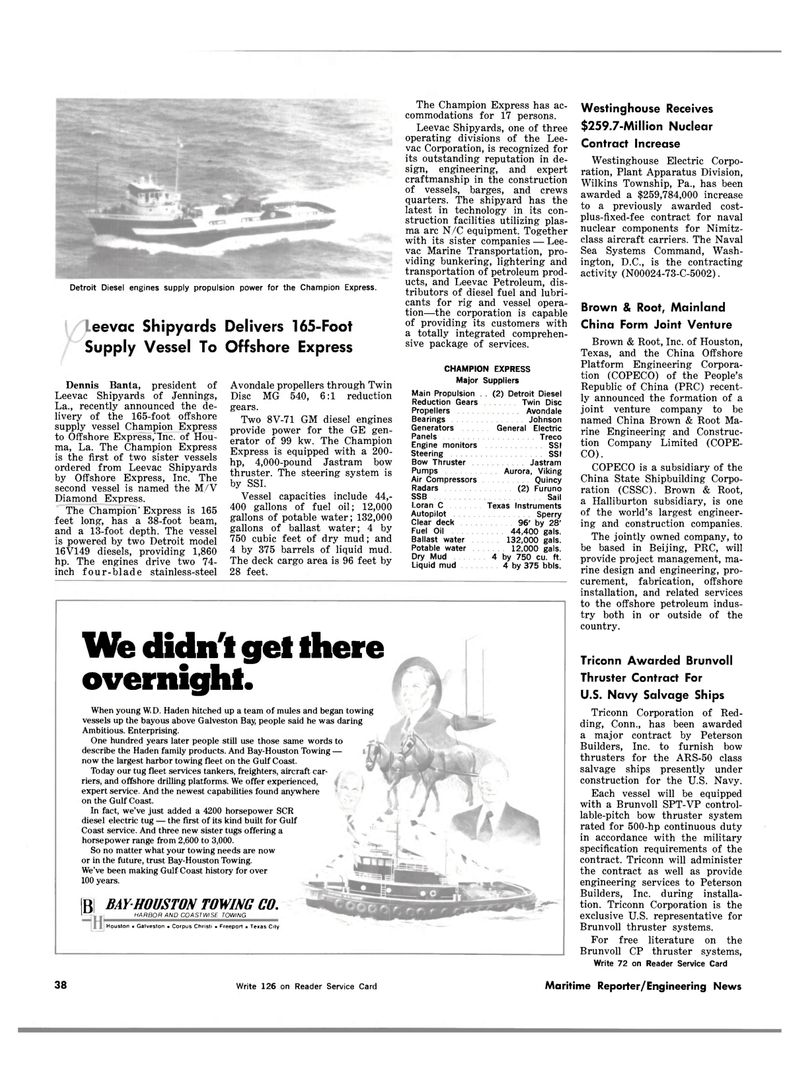 The Champion' Express is 165 feet long, has a 38-foot beam, and a 13-foot depth. The vessel is powered by two Detroit model 16V149 diesels, providing 1,860 hp. The engines drive two 74- inch four-blade stainless-steel

Express is equipped with a 200- hp, 4,000-pound Jastram bow thruster. The steering system is by SSL

The Champion Express has ac- commodations for 17 persons.

Leevac Shipyards, one of three operating divisions of the Lee- vac Corporation, is recognized for its outstanding reputation in de- sign, engineering, and expert craftmanship in the construction of vessels, barges, and crews quarters. The shipyard has the latest in technology in its con- struction facilities utilizing plas- ma arc N/C equipment. Together with its sister companies — Lee- vac Marine Transportation, pro- viding bunkering, lightering and transportation of petroleum prod- ucts, and Leevac Petroleum, dis- tributors of diesel fuel and lubri- cants for rig and vessel opera- tion—the corporation is capable of providing its customers with a totally integrated comprehen- sive package of services.

Wilkins Township, Pa., has been awarded a $259,784,000 increase to a previously awarded cost- plus-fixed-fee contract for naval nuclear components for Nimitz- class aircraft carriers. The Naval

Texas, and the China Offshore

COPECO is a subsidiary of the

The jointly owned company, to be based in Beijing, PRC, will provide project management, ma- rine design and engineering, pro- curement, fabrication, offshore installation, and related services to the offshore petroleum indus- try both in or outside of the country.

Triconn Corporation of Red- ding, Conn., has been awarded a major contract by Peterson

Builders, Inc. to furnish bow thrusters for the ARS-50 class salvage ships presently under construction for the U.S. Navy.

Each vessel will be equipped with a Brunvoll SPT-VP control- lable-pitch bow thruster system rated for 500-hp continuous duty in accordance with the military specification requirements of the contract. Triconn will administer the contract as well as provide engineering services to Peterson

Builders, Inc. during installa- tion. Triconn Corporation is the exclusive U.S. representative for

For free literature on the

We didn't get there overnight.

When young W.D. Haden hitched up a team of mules and began towing vessels up the bayous above Galveston Bay, people said he was daring

One hundred years later people still use those same words to describe the Haden family products. And Bay-Houston Towing — now the largest harbor towing fleet on the Gulf Coast.

In fact, we've just added a 4200 horsepower SCR diesel electric tug — the first of its kind built for Gulf

Coast service. And three new sister tugs offering a horsepower range from 2,600 to 3,000.

So no matter what your towing needs are now or in the future, trust Bay-Houston Towing.