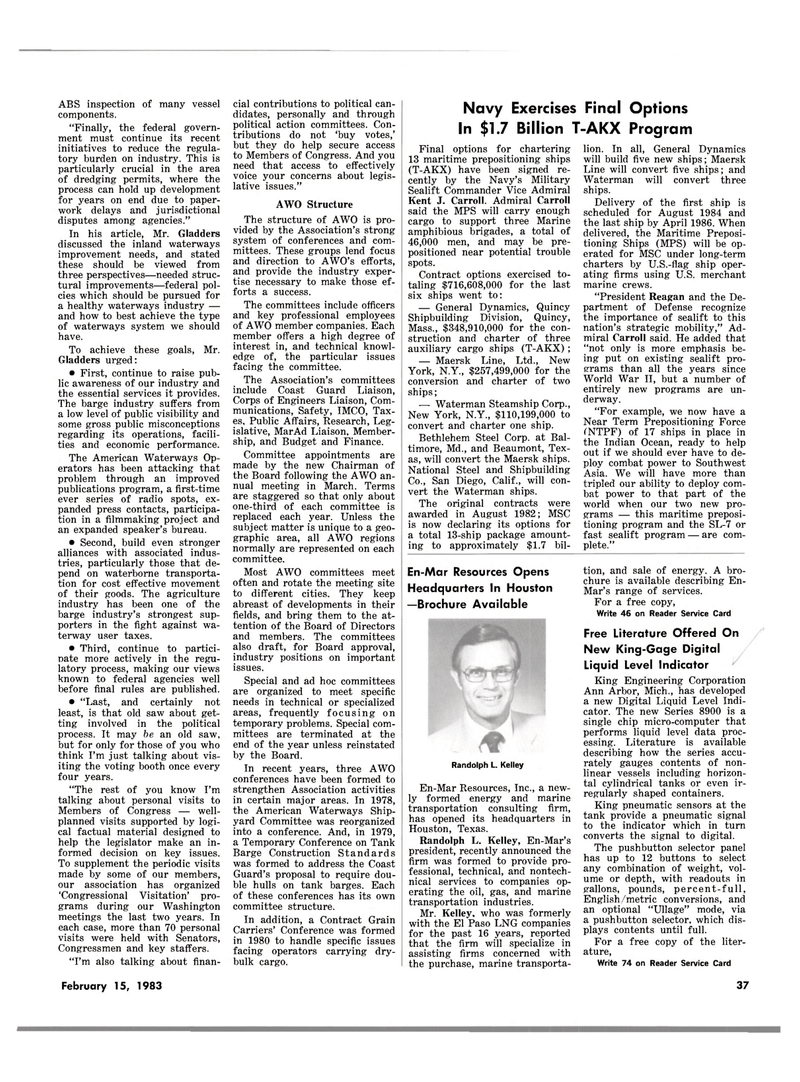 ABS inspection of many vessel components. "Finally, the federal govern- ment must continue its recent initiatives to reduce the regula- tory burden on industry. This is particularly crucial in the area of dredging permits, where the process can hold up development for years on end due to paper- work delays and jurisdictional disputes among agencies."

In his article, Mr. Gladders discussed the inland waterways improvement needs, and stated these should be viewed from three perspectives—needed struc- tural improvements—federal pol- cies which should be pursued for a healthy waterways industry — and how to best achieve the type of waterways system we should have.

To achieve these goals, Mr.

Gladders urged: • First, continue to raise pub- lic awareness of our industry and the essential services it provides.

The barge industry suffers from a low level of public visibility and some gross public misconceptions regarding its operations, facili- ties and economic performance.

The American Waterways Op- erators has been attacking that problem through an improved publications program, a first-time ever series of radio spots, ex- panded press contacts, participa- tion in a filmmaking project and an expanded speaker's bureau. • Second, build even stronger alliances with associated indus- tries, particularly those that de- pend on waterborne transporta- tion for cost effective movement of their goods. The agriculture industry has been one of the barge industry's strongest sup- porters in the fight against wa- terway user taxes. • Third, continue to partici- pate more actively in the regu- latory process, making our views known to federal agencies well before final rules are published. • "Last, and certainly not least, is that old saw about get- ting involved in the political process. It may be an old saw, but for only for those of you who think I'm just talking about vis- iting the voting booth once every four years. "The rest of you know I'm talking about personal visits to

To supplement the periodic visits made by some of our members, our association has organized 'Congressional Visitation' pro- grams during our Washington meetings the last two years. In each case, more than 70 personal visits were held with Senators,

Congressmen and key staffers. "I'm also talking about finan- cial contributions to political can- didates, personally and through political action committees. Con- tributions do not 'buy votes,' but they do help secure access to Members of Congress. And you need that access to effectively voice your concerns about legis- lative issues."

The structure of AWO is pro- vided by the Association's strong system of conferences and com- mittees. These groups lend focus and direction to AWO's efforts, and provide the industry exper- tise necessary to make those ef- forts a success.

The committees include officers and key professional employees of AWO member companies. Each member offers a high degree of interest in, and technical knowl- edge of, the particular issues facing the committee.

Committee appointments are made by the new Chairman of the Board following the AWO an- nual meeting in March. Terms are staggered so that only about one-third of each committee is replaced each year. Unless the subject matter is unique to a geo- graphic area, all AWO regions normally are represented on each committee.

Most AWO committees meet often and rotate the meeting site to different cities. They keep abreast of developments in their fields, and bring them to the at- tention of the Board of Directors and members. The committees also draft, for Board approval, industry positions on important issues.

Special and ad hoc committees are organized to meet specific needs in technical or specialized areas, frequently focusing on temporary problems. Special com- mittees are terminated at the end of the year unless reinstated by the Board.

In recent years, three AWO conferences have been formed to strengthen Association activities in certain major areas. In 1978, the American Waterways Ship- yard Committee was reorganized into a conference. And, in 1979, a Temporary Conference on Tank

Barge Construction Standards was formed to address the Coast

Guard's proposal to require dou- ble hulls on tank barges. Each of these conferences has its own committee structure.

In addition, a Contract Grain

Bethlehem Steel Corp. at Bal- timore, Md., and Beaumont, Tex- as, will convert the Maersk ships.

The original contracts were awarded in August 1982; MSC is now declaring its options for a total 13-ship package amount- ing to approximately $1.7 bil- lion. In all, General Dynamics will build five new ships; Maersk

Line will convert five ships; and

Delivery of the first ship is scheduled for August 1984 and the last ship by April 1986. When delivered, the Maritime Preposi- tioning Ships (MPS) will be op- erated for MSC under long-term charters by U.S.-flag ship oper- ating firms using U.S. merchant marine crews. "President Reagan and the De- partment of Defense recognize the importance of sealift to this nation's strategic mobility," Ad- miral Carroll said. He added that "not only is more emphasis be- ing put on existing sealift pro- grams than all the years since

World War II, but a number of entirely new programs are un- derway. "For example, we now have a

Near Term Prepositioning Force (NTPF) of 17 ships in place in the Indian Ocean, ready to help out if we should ever have to de- ploy combat power to Southwest

Asia. We will have more than tripled our ability to deploy com- bat power to that part of the world when our two new pro- grams — this maritime preposi- tioning program and the SL-7 or fast sealift program — are com- plete."

Mr. Kelley, who was formerly with the El Paso LNG companies for the past 16 years, reported that the firm will specialize in assisting firms concerned with the purchase, marine transporta- tion, and sale of energy. A bro- chure is available describing En-

For a free copy,

King pneumatic sensors at the tank provide a pneumatic signal to the indicator which in turn converts the signal to digital.

The pushbutton selector panel has up to 12 buttons to select any combination of weight, vol- ume or depth, with readouts in gallons, pounds, percent-full,

English/metric conversions, and an optional "Ullage" mode, via a pushbutton selector, which dis- plays contents until full.

For a free copy of the liter- ature,