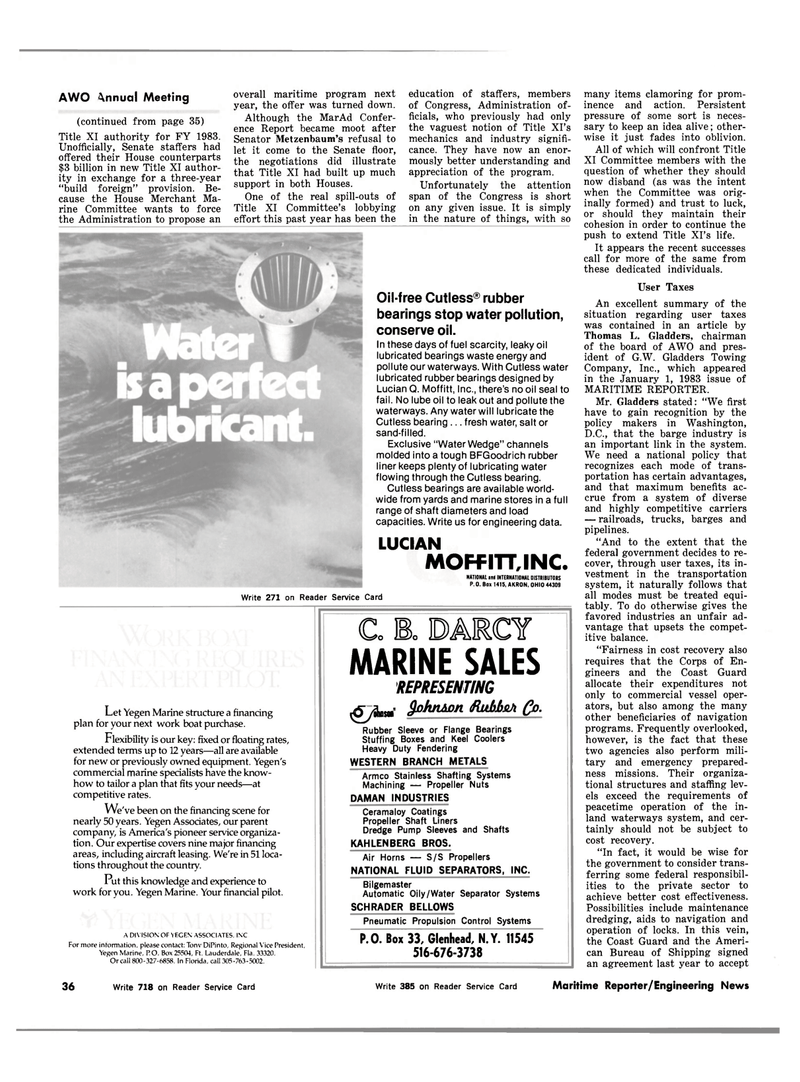 Unofficially, Senate staffers had offered their House counterparts $3 billion in new Title XI author- ity in exchange for a three-year "build foreign" provision. Be- cause the House Merchant Ma- rine Committee wants to force the Administration to propose an overall maritime program next year, the offer was turned down.

Although the MarAd Confer- ence Report became moot after

Senator Metzenbaum's refusal to let it come to the Senate floor, the negotiations did illustrate that Title XI had built up much support in both Houses.

One of the real spill-outs of

Title XI Committee's lobbying effort this past year has been the

Card education of staffers, members of Congress, Administration of- ficials, who previously had only the vaguest notion of Title XI's mechanics and industry signifi- cance. They have now an enor- mously better understanding and appreciation of the program.

Unfortunately the attention span of the Congress is short on any given issue. It is simply in the nature of things, with so many items clamoring for prom- inence and action. Persistent pressure of some sort is neces- sary to keep an idea alive; other- wise it just fades into oblivion.

All of which will confront Title

XI Committee members with the question of whether they should now disband (as was the intent when the Committee was orig- inally formed) and trust to luck, or should they maintain their cohesion in order to continue the push to extend Title XI's life.

It appears the recent successes call for more of the same from these dedicated individuals.

Thomas L. Gladders, chairman of the board of AWO and pres- ident of G.W. Gladders Towing

Mr. Gladders stated: "We first have to gain recognition by the policy makers in Washington,

D.C., that the barge industry is an important link in the system.

We need a national policy that recognizes each mode of trans- portation has certain advantages, and that maximum benefits ac- crue from a system of diverse and highly competitive carriers — railroads, trucks, barges and pipelines. "And to the extent that the federal government decides to re- cover, through user taxes, its in- vestment in the transportation system, it naturally follows that all modes must be treated equi- tably. To do otherwise gives the favored industries an unfair ad- vantage that upsets the compet- itive balance. "Fairness in cost recovery also requires that the Corps of En- gineers and the Coast Guard allocate their expenditures not only to commercial vessel oper- ators, but also among the many other beneficiaries of navigation programs. Frequently overlooked, however, is the fact that these two agencies also perform mili- tary and emergency prepared- ness missions. Their organiza- tional structures and staffing lev- els exceed the requirements of peacetime operation of the in- land waterways system, and cer- tainly should not be subject to cost recovery. "In fact, it would be wise for the government to consider trans- ferring some federal responsibil- ities to the private sector to achieve better cost effectiveness.

Possibilities include maintenance dredging, aids to navigation and operation of locks. In this vein, the Coast Guard and the Ameri- can Bureau of Shipping signed an agreement last year to accept

Lucian Q. Moffitt, Inc., there's no oil seal to fail. No lube oil to leak out and pollute the waterways. Any water will lubricate the

Cutless bearings are available world- wide from yards and marine stores in a full range of shaft diameters and load capacities. Write us for engineering data.

Let Yegen Marine structure a financing plan for your next work boat purchase.

Flexibility is our key: fixed or floating rates, extended terms up to 12 years—all are available for new or previously owned equipment. Yegen's commercial marine specialists have the know- how to tailor a plan that fits your needs—at competitive rates.

We 've been on the financing scene for nearly 50 years. Yegen Associates, our parent company, is America's pioneer service organiza- tion. Our expertise covers nine major financing areas, including aircraft leasing. We're in 51 loca- tions throughout the country.

Put this knowledge and experience to work for you. Yegen Marine. Your financial pilot.

A DIVISION OF YEGEN ASSOCIATES, INC.