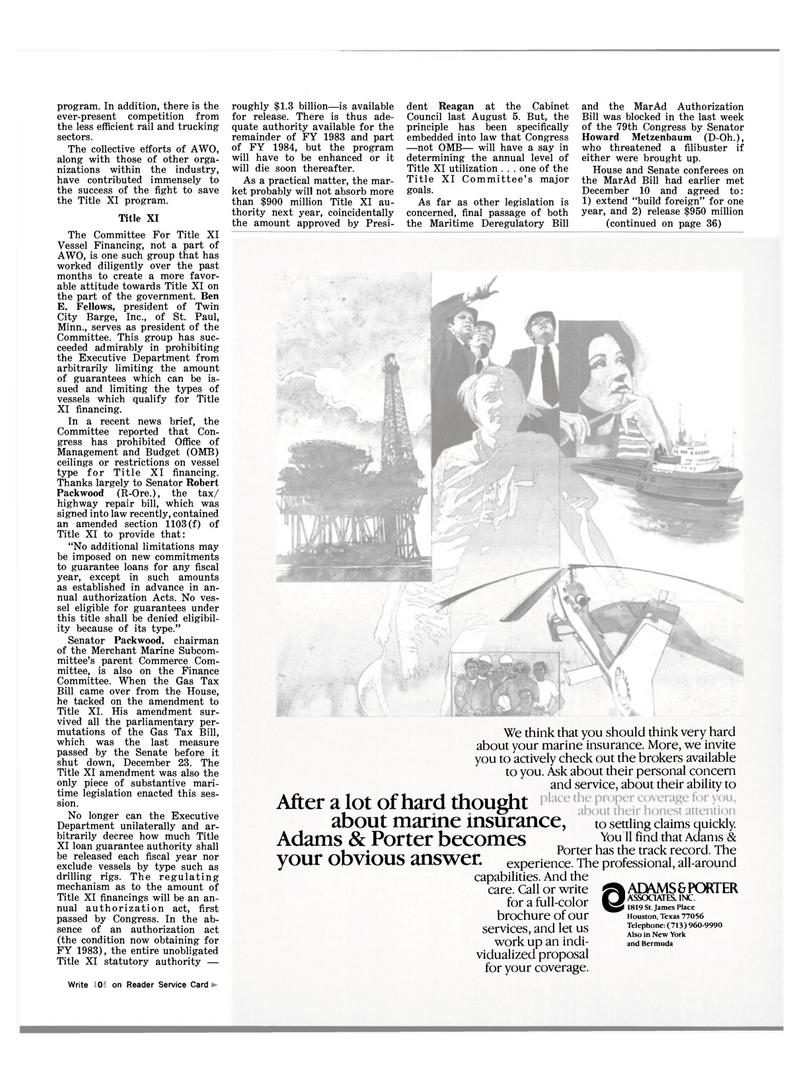 program. In addition, there is the ever-present competition from the less efficient rail and trucking sectors.

The collective efforts of AWO, along with those of other orga- nizations within the industry, have contributed immensely to the success of the fight to save the Title XI program.

The Committee For Title XI

Vessel Financing, not a part of

AWO, is one such group that has worked diligently over the past months to create a more favor- able attitude towards Title XI on the part of the government. Ben

Minn., serves as president of the

Committee. This group has suc- ceeded admirably in prohibiting the Executive Department from arbitrarily limiting the amount of guarantees which can be is- sued and limiting the types of vessels which qualify for Title

In a recent news brief, the

Committee reported that Con- gress has prohibited Office of

Thanks largely to Senator Robert

Packwood (R-Ore.), the tax/ highway repair bill, which was signed into law recently, contained an amended section 1103(f) of

Title XI to provide that: "No additional limitations may be imposed on new commitments to guarantee loans for any fiscal year, except in such amounts as established in advance in an- nual authorization Acts. No ves- sel eligible for guarantees under this title shall be denied eligibil- ity because of its type."

Committee. When the Gas Tax

Bill came over from the House, he tacked on the amendment to

Title XI. His amendment sur- vived all the parliamentary per- mutations of the Gas Tax Bill, which was the last measure passed by the Senate before it shut down, December 23. The

No longer can the Executive

Department unilaterally and ar- bitrarily decree how much Title

XI loan guarantee authority shall be released each fiscal year nor exclude vessels by type such as drilling rigs. The regulating mechanism as to the amount of

Title XI statutory authority — roughly $1.3 billion—is available for release. There is thus ade- quate authority available for the remainder of FY 1983 and part of FY 1984, but the program will have to be enhanced or it will die soon thereafter.

As a practical matter, the mar- ket probably will not absorb more than $900 million Title XI au- thority next year, coincidentally the amount approved by Presi- dent Reagan at the Cabinet

Council last August 5. But, the principle has been specifically embedded into law that Congress —not OMB— will have a say in determining the annual level of

Title XI utilization . . . one of the

As far as other legislation is concerned, final passage of both the Maritime Deregulatory Bill and the MarAd Authorization

Howard Metzenbaum (D-Oh.), who threatened a filibuster if either were brought up.

House and Senate conferees on the MarAd Bill had earlier met

We think that you should think very hard about your marine insurance. More, we invite you to actively check out the brokers available to you. Ask about their personal concern and service, about their ability to

After a lot of hard thought about marine insurance, to settling claims quickly.

Adams & Porter becomes „ ,Voul1 find,thatAda]ni,s1 & ^ i . Porter has the track record. The your ODVIOUS answer. experience. The professional, all-around capabilities. And the care. Call or write for a full-color brochure of our services, and let us work up an indi- vidualized proposal for your coverage. @ AEWMS & PORTER ASSOCIATES. INC. 1819 St. James Place