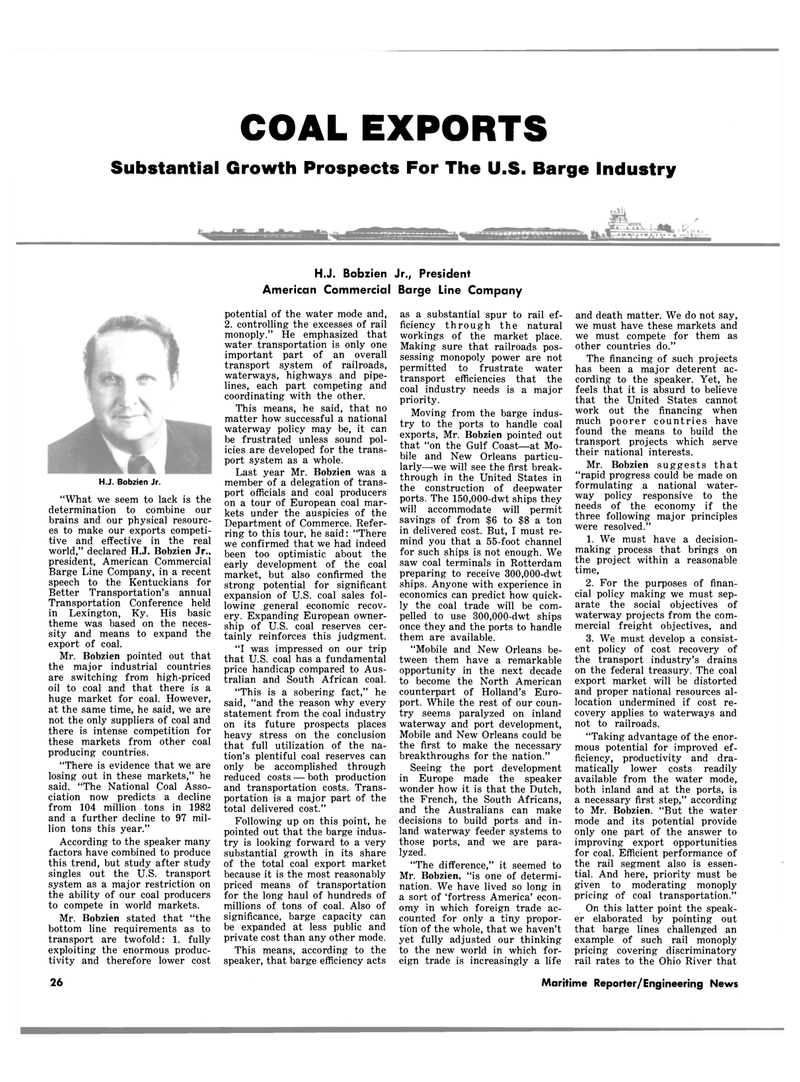 H.J. Bobzien Jr. "What we seem to lack is the determination to combine our brains and our physical resourc- es to make our exports competi- tive and effective in the real world," declared H.J. Bobzien Jr., president, American Commercial

Barge Line Company, in a recent speech to the Kentuckians for

Transportation Conference held in Lexington, Ky. His basic theme was based on the neces- sity and means to expand the export of coal.

Mr. Bobzien pointed out that the major industrial countries are switching from high-priced oil to coal and that there is a huge market for coal. However, at the same time, he said, we are not the only suppliers of coal and there is intense competition for these markets from other coal producing countries. "There is evidence that we are losing out in these markets," he said. "The National Coal Asso- ciation now predicts a decline from 104 million tons in 1982 and a further decline to 97 mil- lion tons this year."

According to the speaker many factors have combined to produce this trend, but study after study singles out the U.S. transport system as a major restriction on the ability of our coal producers to compete in world markets.

Mr. Bobzien stated that "the bottom line requirements as to transport are twofold: 1. fully exploiting the enormous produc- tivity and therefore lower cost

American Commercial potential of the water mode and, 2. controlling the excesses of rail monoply." He emphasized that water transportation is only one important part of an overall transport system of railroads, waterways, highways and pipe- lines, each part competing and coordinating with the other.

This means, he said, that no matter how successful a national waterway policy may be, it can be frustrated unless sound pol- icies are developed for the trans- port system as a whole.

Last year Mr. Bobzien was a member of a delegation of trans- port officials and coal producers on a tour of European coal mar- kets under the auspicies of the

Department of Commerce. Refer- ring to this tour, he said: "There we confirmed that we had indeed been too optimistic about the early development of the coal market, but also confirmed the strong potential for significant expansion of U.S. coal sales fol- lowing general economic recov- ery. Expanding European owner- ship of U.S. coal reserves cer- tainly reinforces this judgment. "I was impressed on our trip that U.S. coal has a fundamental price handicap compared to Aus- tralian and South African coal. "This is a sobering fact," he said, "and the reason why every statement from the coal industry on its future prospects places heavy stress on the conclusion that full utilization of the na- tion's plentiful coal reserves can only be accomplished through reduced costs — both production and transportation costs. Trans- portation is a major part of the total delivered cost."

Following up on this point, he pointed out that the barge indus- try is looking forward to a very substantial growth in its share of the total coal export market because it is the most reasonably priced means of transportation for the long haul of hundreds of millions of tons of coal. Also of significance, barge capacity can be expanded at less public and private cost than any other mode.

This means, according to the speaker, that barge efficiency acts

Barge Line Company as a substantial spur to rail ef- ficiency through the natural workings of the market place.

Making sure that railroads pos- sessing monopoly power are not permitted to frustrate water transport efficiencies that the coal industry needs is a major priority.

Moving from the barge indus- try to the ports to handle coal exports, Mr. Bobzien pointed out that "on the Gulf Coast—at Mo- bile and New Orleans particu- larly—we will see the first break- through in the United States in the construction of deepwater ports. The 150,000-dwt ships they will accommodate will permit savings of from $6 to $8 a ton in delivered cost. But, I must re- mind you that a 55-foot channel for such ships is not enough. We saw coal terminals in Rotterdam preparing to receive 300,000-dwt ships. Anyone with experience in economics can predict how quick- ly the coal trade will be com- pelled to use 300,000-dwt ships once they and the ports to handle them are available. "Mobile and New Orleans be- tween them have a remarkable opportunity in the next decade to become the North American counterpart of Holland's Euro- port. While the rest of our coun- try seems paralyzed on inland waterway and port development,

Mobile and New Orleans could be the first to make the necessary breakthroughs for the nation."

Seeing the port development in Europe made the speaker wonder how it is that the Dutch, the French, the South Africans, and the Australians can make decisions to build ports and in- land waterway feeder systems to those ports, and we are para- lyzed. "The difference," it seemed to

Mr. Bobzien, "is one of determi- nation. We have lived so long in a sort of 'fortress America' econ- omy in which foreign trade ac- counted for only a tiny propor- tion of the whole, that we haven't yet fully adjusted our thinking to the new world in which for- eign trade is increasingly a life and death matter. We do not say, we must have these markets and we must compete for them as other countries do."

The financing of such projects has been a major deterent ac- cording to the speaker. Yet, he feels that it is absurd to believe that the United States cannot work out the financing when much poorer countries have found the means to build the transport projects which serve their national interests.

Mr. Bobzien suggests that "rapid progress could be made on formulating a national water- way policy responsive to the needs of the economy if the three following major principles were resolved." 1. We must have a decision- making process that brings on the project within a reasonable time, 2. For the purposes of finan- cial policy making we must sep- arate the social objectives of waterway projects from the com- mercial freight objectives, and 3. We must develop a consist- ent policy of cost recovery of the transport industry's drains on the federal treasury. The coal export market will be distorted and proper national resources al- location undermined if cost re- covery applies to waterways and not to railroads. "Taking advantage of the enor- mous potential for improved ef- ficiency, productivity and dra- matically lower costs readily available from the water mode, both inland and at the ports, is a necessary first step," according to Mr. Bobzien. "But the water mode and its potential provide only one part of the answer to improving export opportunities for coal. Efficient performance of the rail segment also is essen- tial. And here, priority must be given to moderating monoply pricing of coal transportation."