More than 1,500 delegates and exhibitors from all over the world are expected to attend.

More than 100 technical papers dealing with the prevention, behavior, control, and cleanup of oil spills will be presented. A number of films will also be shown.

Poster presentations will add a new dimension to the conference.

Sponsors of the international conference are the American Petroleum Institute, the U.S. Environmental Protection Agency, and the U.S. Coast Guard.

One of the papers "Activities of the USSR Ministry of Merchant Marine Organizations in the field of Marine Environment Protection," by S.M. Nunuparov, to be presented by Oleg N. Khalimonov, will mark the first time the USSR has presented a paper at this conference, informed sources reported. The Soviet Government has had representatives at prior conferences, it was noted, Two special luncheons are planned. On Tuesday, March 1, at noon in the North Banquet Hall, Adm. James S. Gracey, Commandant of the U.S. Coast Guard, will deliver an address.

On Thursday, March 3, James H. Gillie, assistant to the vice president of public affairs of Phillips 66, will entertain the luncheon guests with an address entitled "Right On Instead of Rip Off." This luncheon also will begin at noon in the North Banquet Hall.

The film festival will highlight important technical aspects of the industry. The films will be shown on a scheduled basis in Room No. 25 of the convention center. A brochure listing titles, viewing times, and loan sources will be among the information packets distributed at the conference.

Speaker's breakfasts will be held on Tuesday, Wednesday, and Thursday mornings at 7:00 a.m.

in Room No. 31 at the convention center. The conference committee has requested chairmen, speakers, and panel members attend the breakfasts on the day they are speaking or are chairing a session.

The organizers also have arranged for a speakers' practice room, Room No. 12, to be available.

A copy of the Conference Proceedings is included with full registration and will be available onsite.

Additional copies ordered in advance also will be available onsite at a pre-publication price of $40. Following the conference, the 1983 Conference Proceedings may be ordered from the American Petroleum Institute, Washington, D.C.

33 at the center. Hostesses familiar with San Antonio will be on hand to offer guidance on tours and other local attractions.

A tour program has been planned with arrangements being made for three tours that include places such as El Mercado, the Institute of Texan Cultures, the Spanish Governor's Palace, the Lone Star Brewery, Mission San Jose, the Alamo, the Southwest Craft Center, and the King William restoration area.

The registration fee for the conference is $200 and includes all technical sessions, two luncheons, and a copy of the proceedings. 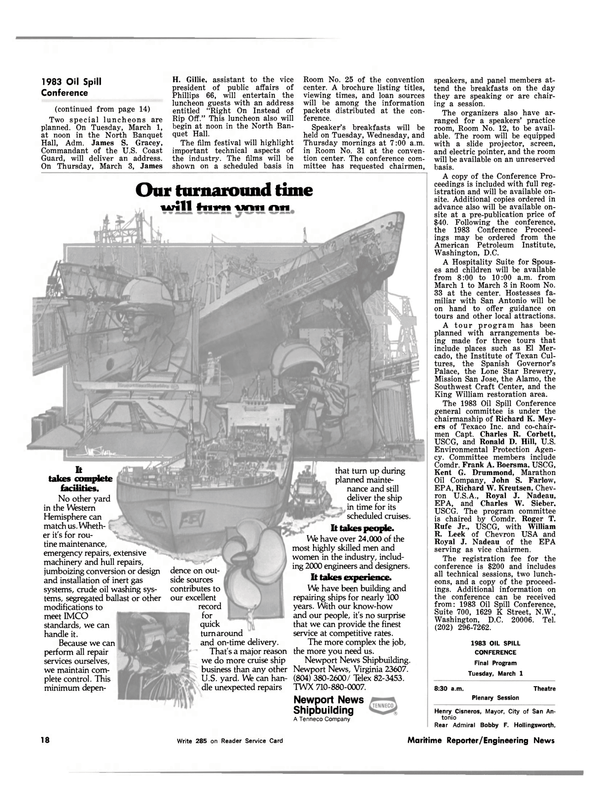