This vessel is the second in a series of five contracted for by COMAR Offshore Corporation, also of Morgan City.

The C/Major was designed to CO-MAR's specifications for rugged use serving offshore oil rigs.

According to Paul Haines, president of CO-MAR, "We are delighted to work with a company that can adapt its boats to our particular needs. The versatility Swiftships demonstrates is directly attributable to their experience in designing and building top quality boats." Approved by the United States Coast Guard, the C/Major carries a propulsion system that combines two GM Detroit Diesel 12V149N engines, each rated 675 bhp at 1,800 rpm, with Twin Disc reduction gears to give the craft a trial speed of 13 knots. Two Delco 40-kw generators are driven by Detroit Diesel 4-71 engines.

The vessel's cargo deck is 50 by 21 feet, which allows a cargo capacity of 101 long tons above deck and 106 long tons below. It carries 24,200 gallons of fuel and 34,000 gallons potable water, both of which are transferable, and can house a five-man crew plus transport 17 other persons.

It draws a maximum of 9 feet 9 inches fully loaded. Two 54 by 46-inch, four-blade bronze wheels were supplied by Columbian.

The seaworthy craft is outfitted with full firefighting capabilities, including monitor, lifesaving gear, and air-conditioning and heating throughout. It also features a complement of other navigational and safety equipment.

Having passed rigorous maneuvering tests and various other shakedown routines, the C/Major has begun operations for the petroleum industry in the Gulf of Mexico. 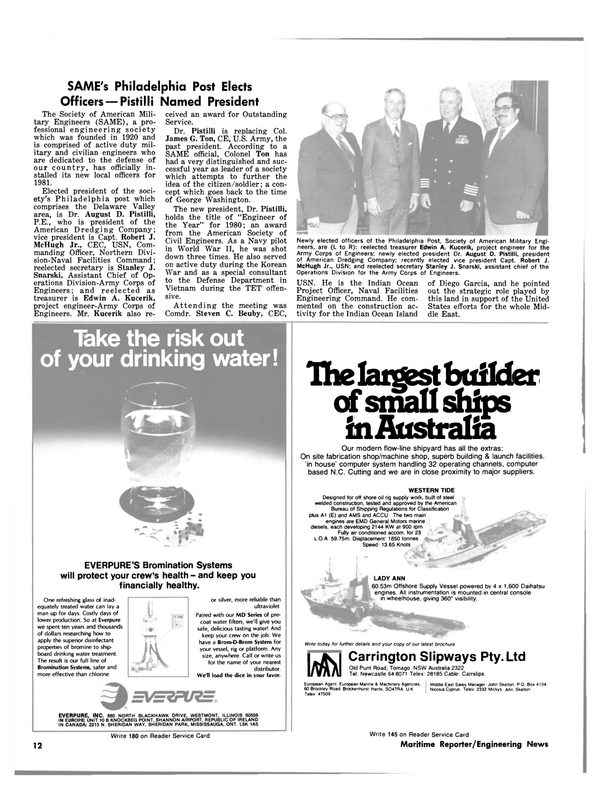