Todd Gets $32 Million In Commercial Contracts- Earnings Up For Quarter

Todd Shipyards C o r p o r a t i on has reported higher sales and pre-tax earnings for the third quarter and 39 weeks ended December 28, 1980, than in the comparable year e a r l i e r periods.

Third quarter sales amounted to $150.7 million, compared with $125.8 million in 1979. These gains were achieved despite a 10- week strike at the Los Angeles Division, which was settled on October 2, 1980. Full production was resumed during the third quarter at the Los Angeles Division, which is constructing 11 of 21 g u i d e d - m i s s i l e frigates (FFGs) under Navy c o n t r a c ts awarded to Todd. The other 10 FFGs are being built at the Seattle Division. Four FFGs have already been delivered and six more will be delivered during the next 12 months. Navy acquisition plans call for the award of six more FFGs prior to April 30, 1981, of which Todd expects to obtain its fair share.

It was also announced that several s i g n i f i c a n t commercial contracts were recently received, including the construction of two large bulk coal barges for $22 million; the modification of two large oceangoing tugs for $4 million ; fire damage repair of a large semisubmersible d r i l l i n g vessel for $3 million, and the repair of a foreign-flag tanker for $3 million.

Sales for the 39 weeks ended December 28, 1980 were $427.4 million, compared with $373.0 million in the comparable 1979 period. Net income totaled $15.4 million, or $3.04 per share, compared with $13.9 million, or $4.53 per share in 1979. Net income in 1980 included a $4.4 million, or $.80 per share. Federal income tax credit arising from utilization of tax benefit of prior year loss compared with $6.2 million, or $2.02 per share, in the preceding year which also included a $951,000 capital gain from sale of land. J.T. Gilbride, Todd chairman and chief executive officer, stated that "the company's fiscal y e a r ending March 29, 1981 should result in the third consecutive year of record peacetime sales and earnings." Net income per share in 1980 was affected by the greater number of common shares and common share equivalents outstanding than in the comparable 1979 periods. All per share data gives effect to the two-for-one stock split distributed to shareholders on January 5, 1981. 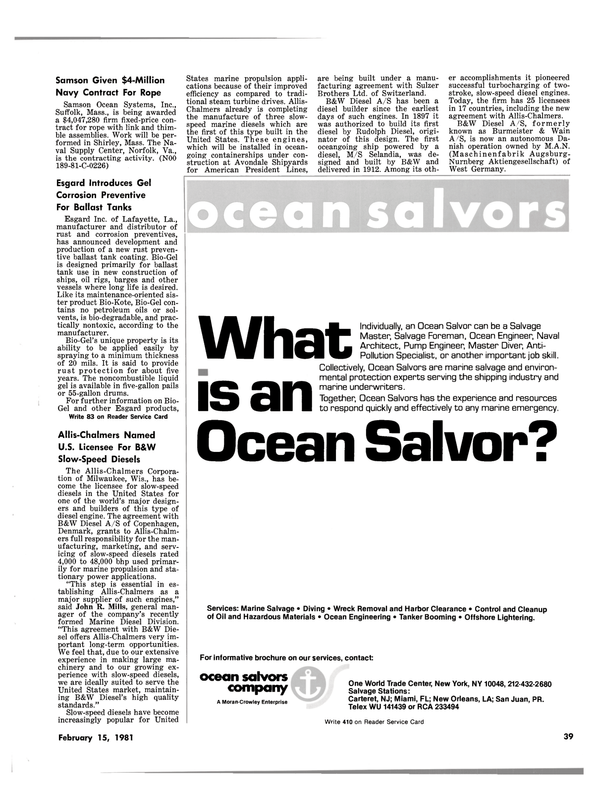 Read Todd Gets $32 Million In Commercial Contracts- Earnings Up For Quarter in Pdf, Flash or Html5 edition of February 15, 1981 Maritime Reporter