A discussion-provoking paper titled "Shipbuilding P r a c t i c es Around the World" was presented by Jay J. Hassani of Century Engineering, Inc., Baltimore, at a recent meeting of the Chesapeake Section of The Society of Naval Architects and Marine Engineers.

In his paper, Mr. Hassani reviewed the facilities used by various shipyards worldwide in carrying out selected phases of the shipbuilding process with significant differences in approach being highlighted. In addition, the effects of the shift in emphasis from building increasingly larger ships in the 1960s and early 1970s to environmentally safer, more fuel-efficient designs of the present clay were discussed.

In his description of shipbuilding facilities, Mr. Hassani emphasized the transition to more technologically advanced and automated techniques in ship construction, especially by nations in the Far East and Europe. The gradual shift from conventional building ways and building docks to tandem fabrication in multisection graving docks was highlighted and the approaches taken by yards in Japan, Taiwan, Germany, and Portugal described.

Also, a number of examples of steel-handling t e c h n i q u e s were discussed, including the fabrication of modules of up to 700 tons in size. The facilities using these advanced approaches are ideally suited to series p r o d u c t i o n of ships; however, Mr. Hassani believes that the demand for large production runs of similar ships has declined and will continue to do so as a result of the world economic situation. In addition, the rising labor costs in the West has moved a large amount of the remaining series production to the Far East, leaving a number of modern yards in the U.S. and Europe with excess capacity and large capital i n v e s t m e n t s to amortize.

The impacts on the shipbuilding industry of the growing role of coal in meeting the world's energy demands were touched on by Mr. Hassani as part of his assessment of the changing complexion of the type of vessels that will be built during the next 10 years. As an alternative to the conventional bulk shipment of coal, he proposed the use of containers that could be filled at the mine to alleviate the negative environmental effects of standard coal shipment. These containers need not be of the conventional ISO form; instead, they would be optimized for bulk cargo.

The prepared discussions involved a number of extensive comments concerning some of the author's conclusions. Edwin Hood of the Shipbuilders Council of America felt that series shipbuilding is still viable, citing the 10 LNG carriers built by General Dynamics along with the six additional ones on order. He also felt that U.S. shipyards are as technologically advanced as any in the world, and only the lack of government support, and in some cases outright government hindrance, is responsible for the U.S. shipbuilding industry lagging behind those of other nations.

McMullen & Associates, Inc., addressed the concept of containerized shipment of coal. He felt that it would be difficult to surpass in economy and efficiency the present use of unit trains, high-speed loaders and unloaders, and wide, shallow-draft bulk carriers.

The ecological problems involved in coal handling could in all probability be handled in a more cost-effective manner. 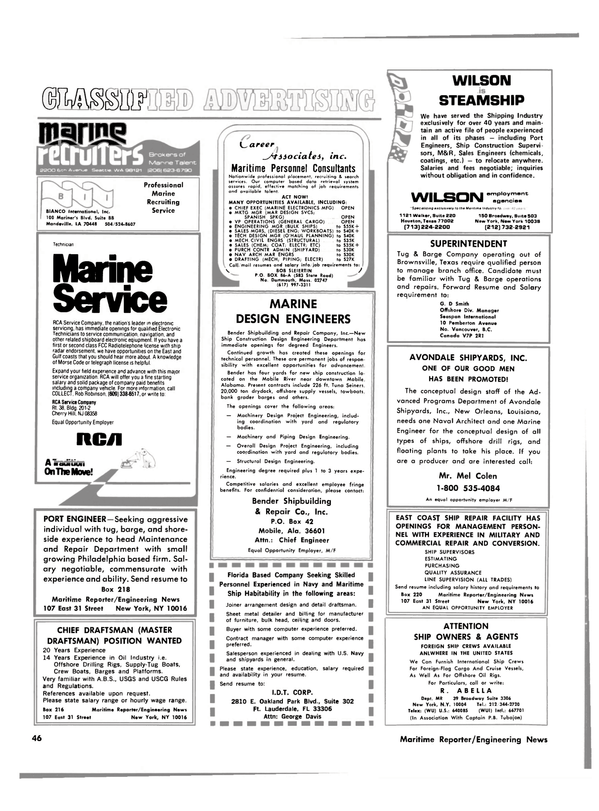