A Winding Path to a Maritime Career

Charlottesville, Va. and the University of Virginia are a long, long way from the ocean. Arguably, an even greater distance is the one which stretches from a Bachelor of Arts degree in Italian and German, all the way to a C-suite position at one of the nation’s premier ocean shipping and logistics companies. But, that’s just where Parker Harrison finds herself, a little more than 20 years after graduating from college. Along the way, she also earned a Master’s Degree, also from the University of Virginia, and eventually, a Juris Doctor from Tulane Law School (magna cum laude), in May of 2001.

Looking back, a much younger Parker Harrison had no inkling of what was to come next. “I actually grew up in New Orleans – we moved there when I was 12 – and I crossed the Mississippi River twice each day to go to and from school. But although I watched the ships pass by, it never occurred to me that those vessels and the cargoes they carried might be in any way relevant to my life. Not even once.  After I finished my Master’s, I returned to New Orleans, where I worked for several years before applying to law school.”

Serendipity – or good planning?
Harrison’s undergraduate degree in Italian and German studies merits more than passing attention. That’s because she discovered that she had a knack for languages at a very young age and has actually studied French, German and Italian. “Not a very practical choice, but it was something I was good at and I also knew that graduate school was in my future so my choice of undergraduate majors was not as critical as it might otherwise have been,” she said. Nevertheless, it might be said that a maritime professional whose experience is firmly based in (a.) admiralty law, (b.) the claims process, (c.) risk management, and now (d.) procurement – is as well rounded as an ocean shipping firm could ask for. We asked Harrison: You arguably couldn’t have planned it any better. Did you? Or was this serendipity?

“Getting here was pure serendipity, but staying here is deliberate,” she replied, adding, “I am from New Orleans and had planned to make my career there, so attending Tulane for law school was the logical choice, given Louisiana’s civil law system. When I started at Tulane, I knew nothing about maritime law but decided to try an introductory course to see what it was about, especially given Tulane’s excellent admiralty law program.” A job at the admiralty law group at Chaffe McCall, New Orleans’s oldest law firm, immersed her in the area of defense of maritime litigation – chiefly oil spills, personal injury matters, cargo claims, and the post-Katrina litigation juggernaut. Back then, she had little opportunity to learn about her clients’ day-to-day operations.

Eventually, and after several years of law practice, she had an opportunity to get one step closer to the industry by taking a role with the American Club, a member of the International Group of P&I clubs, which dramatically increased her exposure to the commercial realities of operating a shipping company. At Crowley, you might say she’s finally at the epicenter of that commercial reality. “It doesn’t get much more real or fundamental that buying provisions, fuel, and spare parts for our vessels,” she explains.

Harrison’s internal promotion from Director, Claims, Risk Management to her current role as Vice President – Procurement is a clear step up and has taken her in a slightly different direction. That said; she brings much from the risk side to the equation to her new job, especially when it comes to preventing the kinds of claims that might otherwise come to fruition. And, the new position gives her a fresh perspective on Crowley processes. She explains, “My legal and risk management experience certainly helps me identify potential trouble spots, and my relationships with our Risk Management and Legal teams makes closer collaboration with those disciplines possible. Working together with those groups and having the benefit of their input from the outset can make for a highly efficient and thoughtful procurement process.”

At the end of the day, Harrison insists, VP of Procurement isn’t really a long way from Admiralty Law.

“This role really isn’t unique to the waterfront – in part because Crowley also has trucking, warehousing, fuel distribution in Alaska, and other land-based service offerings. So in addition to fuel for the ships, vessel parts and equipment, we also buy many other items not destined for use on board the vessels. But because admiralty law encompasses nearly every other legal discipline, that background still comes in handy in this new role.”

Women on the Waterfront
According to Harrison, Crowley seeks out top talent wherever it can be found, regardless of gender. And, she insists, the company is committed to building a collaborative, high-performance workforce, and to providing training and career development for every employee each and every year. But, while the role of women in the maritime industry is growing, is not yet representative of the numbers of women professionals in other business sectors. Harrison has her own thoughts on how this metric can be improved.

“There are so many challenges, many of which are self-imposed. The first is ignorance, by which I mean ignorance of this industry and of the vast professional opportunities it offers. The next is lack of self-assurance.  Many women tend to be self-effacing to a fault when in fact they might be better served by taking ownership of their abilities and potential. And, certainly, the old-boy network is alive and well. But at a certain point, women have to figure out how to navigate around those obstacles. I have never been a fan of quotas; they are well-intended but can set people up for failure.”
Harrison continues, “I don’t want an opportunity just because I’m a woman. I want to earn it – and if I don’t, the opportunity should go to someone who does. My biggest challenge has been overcoming the fear of being wrong. That fear stymies growth. I’m still working on the biggest success part; hopefully it lies ahead.”

For women aspiring to the maritime industry, Parker Harrison’s advice is simple: Never, ever pass up an opportunity to learn. She adds, “The people you will meet along the way all come from different backgrounds and have different experiences, styles, and perspectives, each of which can be valuable to you. Never say ‘that’s not my job’, even if you think it isn’t, and do not get down into the mud when disputes arise (and they will). Be respectful but don’t be a pushover. Do not take yourself too seriously. And remember that good humor is as effective as anything when it comes to breaking the ice, persuading people to buy in, and ultimately getting results.”

As Parker Harrison is concerned, the opportunities are there for the taking.  But, she says, “You have to know they’re there, and the biggest challenge to attracting talent to our industry is the fact that most people either don’t know it exists or just don’t understand how important it is to their lives. I think that our industry as a whole does a poor job of marketing itself to the general public. As a result, young men and women searching for a good career have no idea of the opportunities available to them in our industry. This needs to change. I’ve often wondered why our industry doesn’t do Public Service Announcements the way the coal, natural gas, and oil industries do.”

The WISTA Connection
As WISTA USA’s Membership Secretary, a member of the Board of Directors and the current WISTA USA Nominations Committee Chair, Parker Harrison is heavily invested in this group and clearly believes in its value to the maritime community. It is also a major time commitment – one which Harrison does not shy away from. “I believe so strongly in WISTA’s mission – the advancement of qualified and talented women in the maritime industry – that the time investment is one I’m happy to make,” she says, adding “We are contributing to the advancement of our industry by building a formidable network of talented, competent, and successful women in shipping.”

WISTA is a networking organization for women at management level in the maritime industry. For Parker Harrison, however, WISTA has meant so much more. “The connections and friends I have made in and through WISTA are unmatched; no other organization offers the same caliber of people around the world and across the many different sectors of our industry – from ship owners and operators to charterers, managers, agents, suppliers, insurers, brokers, and attorneys. Add to this the fact that WISTA has a presence in 34 countries (and counting), and you can just imagine the opportunities for networking that the organization offers.  Many of these women, none of whom I would know were it not for WISTA, have become my good and trusted friends and mentors. And I actually got my first job at Crowley through a WISTA connection.”

Beyond her personal engagement, Harrison also points to the value that WISTA brings the global maritime community at large. She explains, “Shipping seems to be a peculiarly fragmented industry in which like entities with similar interests tend to stick together but do not always relate well to members of other groups. WISTA provides a forum that transcends those invisible divisions and allows women in the many different segments of the industry from around the globe to connect in a way that no other organization does.” She continues, and asks, “How else, for instance, might an SSQE professional in the Pacific Northwest meet and have the opportunity to interact with the CEO of a Dutch ship owning and managing company? Those lives are not otherwise likely to intersect, but WISTA provides the platform that makes those connections possible.”

Looking Back & Ahead
Parker Harrison’s well-rounded education and varied career path have delivered the Crowley Vice President to an enviable position in industry, but that doesn’t stop her from wondering what might have been or what more she can learn. “I do wish I had sailed, though; having the real world experience would have provided invaluable perspective,” she admits, and along with that says, “I’m thinking about arranging a ride-along on one of our ships to get an idea of what our officers and crews deal with on the job. That’s one of the great things about working for Crowley – the learning never stops.”

Summing up a personal and professional life is pretty hard to do. Arguably, it is impossible. Nevertheless, we asked Parker Harrison to take a stab at it. Her response neatly describes what drives most us – regardless of gender – to the waterfront in the first place. “Each day, I get the opportunity to work with dynamic, talented, and driven people in an industry that I find endlessly fascinating. There is always more to learn, so it is never boring. Who could resist that? I am also intrigued by the fact that our industry is largely invisible, despite how vital it is to the world economy generally and our everyday lives in particular.” You get the idea that Harrison is already figuring out how to turn the last part around. If so, we wouldn’t bet against her.

(As published in the 3Q 2015 edition of Maritime Professional - www.maritimeprofessional.com) 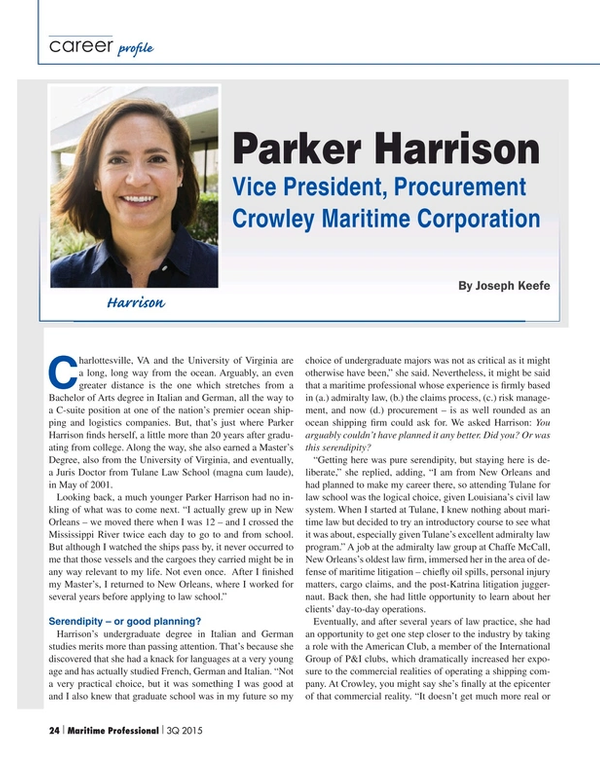 Read A Winding Path to a Maritime Career in Pdf, Flash or Html5 edition of Q3 2015 Maritime Logistics Professional