North America’s energy revolution is starting to have a profound impact on the maritime and offshore sectors.

North America is undergoing a gradual revolution in energy production, and the transformation has begun to have a profound impact on the maritime and offshore sectors. Despite a few volatile years and mixed performance of public companies in the offshore service and drilling markets, the outlook for energy services seems to be positive according to most analysts. Recovery in the Gulf of Mexico (GoM) continues to accelerate since the Deepwater Horizon spill and deep water rig utilization rates are at their highest level in five years. According to IHS, the number of deep water rigs under contract in the GoM is up from 75 to 80 in the past twelve months. Optimism stemming from such statistics has been reflected in increased deal activity including company acquisitions, new vessel orders and purchases of drilling rights in recent months.

Offshore Service and Maintenance
A wide range of companies that provide operations and maintenance services to the offshore industry have seen overall demand increase, and there has been a noticeable increase in the number of middle market M&A deals in the space. Late in 2013, Teledyne Technologies (NYSE:TDY) acquired CD Limited (CDL), a supplier of subsea inertial navigation systems and motion sensors for marine and offshore applications, for $22.5 million. Teledyne continues to build on its strong position in subsea instrumentation and imaging products, with the acquisitions of CDL and BlueView Technologies within a year of one another. Similarly, U.S.-based Roper Industries (NYSE:ROP) acquired a U.K. offshore technologies company with its $55M purchase of Advanced Sensors Limited. Advanced Sensors holds a strong position in the growing segment of oil-in-water analyzers, and is likely just one of several acquisitions to come for growth-oriented Roper.
Offshore oil production creates a tremendous amount of waste, and there is a thriving industry built around consulting and cleaning services for the oil patch. In early February, private equity firm Lariat Partners announced the $100M acquisition of Newpark Environmental Services from Newpark Resources (NYSE:NR). Lariat will combine two acquired Newpark divisions with its platform company Offshore Cleaning Systems, to create a new industry leader called Ecoserv. Another small, private equity-backed deal was the acquisition of $34 million Coates Offshore by Houston’s SCF Partners.  Coates provides specialty rental equipment for well and pipeline test and maintenance to offshore operators in the North Sea, and was divested by Coates Group Holdings Pty of Australia.
Clearly there has been a great deal of appetite among American companies and investors for niche offshore services companies in the U.K. Closer to home, business activity in the GoM continues to grow overall, despite some short-term fluctuations. Offshore service company Harvey Gulf International Marine has been making headlines for several quarters now as it executes on an aggressive growth plan. Backed by the large private equity firm The Jordan Company, Harvey Gulf has expanded via acquisitions and newbuild projects, and has established itself as a leader in the migration to LNG fuel systems for its fleet.  In the fourth quarter of 2013, Harvey Gulf completed the acquisition of Abdon Callais Offshore, LLC for $460 million. Abdon Callais came with a young, technically-advanced fleet of 48 offshore supply vessels. The company also acquired 20 other advanced vessels from Gulf Offshore Logistics and Bee Mar in the past couple of years, and has a number of new vessels under construction. In a final note, Harvey Gulf recently broke ground on its $25 million industry-leading LNG fueling facility Port Fourchon, La.

Jones Act Deals
Beyond offshore service vessels, the energy revolution has energized business activity in other Jones Act segments. U.S.-flagged carriers for coastwise and inland transport of energy products have been in high demand, and some high-profile financial transactions have reflected this trend. In December, pipeline and terminal giant Kinder Morgan Energy Partners, LP (NYSE:KMP) agreed to acquire American Petroleum Tankers (APT) and State Class Tankers (SCT) from an investment group including The Blackstone Group and Cerberus Capital Management. The $962 million cash deal gets Kinder Morgan into the petroleum marine transport business with nine product tankers of about 330,000 barrels of capacity, including four scheduled SCT newbuilds under way at the General Dynamics NASSCO shipyard.
Another interesting story in the Jones Act carrier world has been the transformation of Aker Philadelphia Shipyard (Oslo: AKPS) from a struggling, government-supported facility to a booming Jones Act shipbuilder in recent years. Norwegian holding company Aker took over the yard in 2005 and worked a contract with Shell Oil for 12 product tankers. The yard was hit hard during the financial crisis and with the help of state and local taxpayers, Aker kept the operation alive by securing financing for two spec-built ships.  Fast forward three years, and AKPS has booked contracts with SeaRiver Maritime and Crowley Maritime for up to 14 new vessels, and the publicly-traded stock is up over 2200% in the past 18 months.
On the topic of excellent public stock performance, it is hard to miss the outstanding run at Kirby Corporation (NYSE:KEX). In previous articles, we have followed the dramatic growth of Kirby both organically and via acquisition. The company made six acquisitions since 2008 with a total value of over $800 million, and it seems that their strategy and integration efforts have proven successful.  Figure 1 displays the outsize performance of KEX stock, especially when compared with the lagging offshore service and offshore drilling indices over the past three years.

Trends to Watch
Unfortunately for many of us, the enormous returns of KEX and AKPS are simply hindsight, but there are some trends developing that will drive investment and open new markets in the coming years.  Foremost is the opening of the Mexican portion of the Gulf of Mexico to competitive investment and production. Mexican President Enrique Pena Nieto spearheaded a successful constitutional reform effort to open the offshore region of that country, and foreign companies are lined up to develop alliances and compete for exploration and drilling rights. And as always, analysts and investors are keeping an interested but wary watch on developments in sea-based alternative energy in North America. Cape Wind, LLC will be supplying the first offshore wind farm in the United States, a 3.6 MW operation off the coast of Nantucket. Even more nascent is an effort to support hydropower facility development, as embodied in a proposed bill by U.S. Senator Ron Wyden of Oregon. Look for future editions of this article series to track ongoing developments in traditional and alternative energy finance.

(As published in the 1Q 2014 edition of Maritime Professional - www.maritimeprofessional.com) 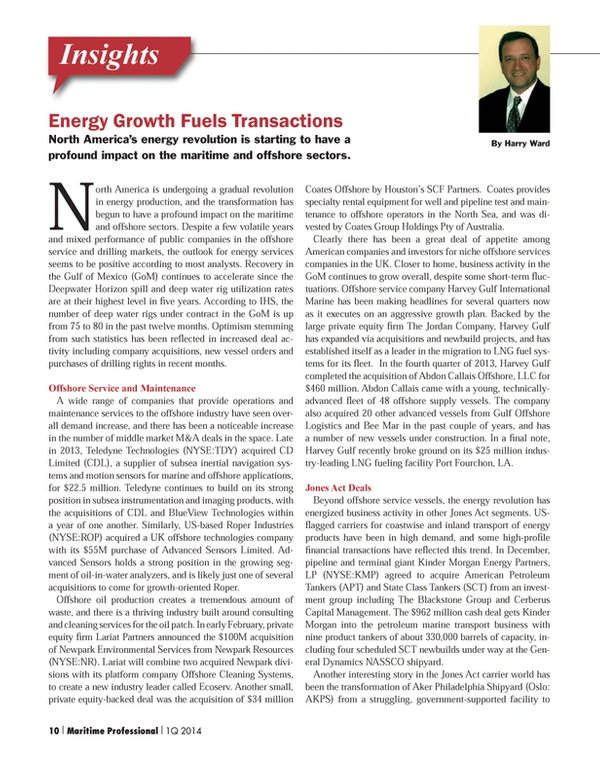