Pioneering LNG on the Great Lakes

Interlake Steamship Company took pole position among Great Lakes shipping companies in the race to provide environmentally correct and economically sound fleet power when it announced in May 2013 its plans to convert its fleet of bulk carriers to operate on LNG. Mark Barker, President of Interlake Steamship Company, weighs in with MarPro on LNG repower, risk and reward.

The potential benefits of LNG as fuel are well documented throughout the commercial shipping sector. According to Germanischer Lloyd, LNG fuel is both cleaner and more cost efficient as it reduces sulphur oxide and carbon dioxide emissions, and so far is less costly than traditional heavy fuel oil. This, coupled with the next wave of ECA regulations scheduled to take effect in the coming years, has shifted industry focus toward affordable, clean energy.
More companies each year are announcing LNG conversions and newbuilds, however these LNG repowers and builds have mainly appeared in the offshore sector, raising questions as to why large scale LNG conversions haven’t taken place on the Great Lakes. The short answer seems to boil down to accessibility. LNG bunkering is not available in the Great Lakes, at least not yet. Mark Barker, President Interlake Steamship Company, said the benefits of LNG lured his company to begin considering conversion a few years ago, with the initial idea to repower a single ship, but the absence of LNG bunkering on the Great Lakes made conversion impractical.

Game Changer
That changed when Interlake announced in May its plans to repower its fleet with dual fuel LNG engines. The company also revealed an agreement in principle with Shell for the supply of LNG to support the operator’s conversion project which will in effect bring LNG bunkering to the Lakes as operations expanded to justify small-scale liquefaction. Now, as Shell prepares bunkering arrangements, Interlake looks to convert a total of seven ships to dual fuel engines powered primarily by LNG, with a goal of completing its first conversion by spring 2016 and one per year, thereafter. Of the 10 ships under Interlake operation, two vessels will not be repowered due to recent conversions to ultra low sulphur diesel, and another will forgo conversion because it is owned by an outside company. Interlake’s first vessels scheduled for repower are its three 1,000-foot class bulk carriers.

Nuts & Bolts
The conversions will take place during the ships’ annual layup period between January and March. Shipyard arrangements and contracts are yet to be finalized, but Barker said an engine manufacturer and tank supplier have already been determined: MaK Caterpillar and Taylor-Wharton, respectively. Interlake’s vessels have recently-upgraded gearboxes, tail shafts, propellers and control systems, so less labor is required for total repower. “We’re changing engines out. We’re putting in gas systems and the safety systems that go along with that, and that’s really the scope of the project,” Barker said. “We’ve done extensive repowers and equipment upgrades on our ships already, so LNG is just another step in that equipment upgrade.”
For Barker, the “next step” is ultimately about providing a long term transportation option for Interlake customers that is both cost effective and sustainable. “We need to be compliant or exceed compliance,” Barker said, “and if we’re going to install technology, we want to put technology in that we feel will withstand the test of time.”
There are other ways to increase efficiency and sustainability, but after thorough investigation, Barker said the company decided its most attractive option was an LNG repower, especially when planning for the onset of additional ECA regulations. “We looked at technologies of all kinds: scrubbers, number two diesel, using compliant fuels and other alternatives,” Barker said, adding, “We were trying to look at the technology from a long term point of view, looking further than just a few years. Scrubbers would help us become compliant, but LNG would exceed compliance, utilizing a lower cost fuel than just using ultra low sulphur diesel and still be able to provide a reliable, low-cost transportation to our customers.”
He added, “Fuel is a large impact cost of our business. And at the same time we want to make sure we are minimizing our effects on the environment. It was those two drivers that came together to make this work.”

Trailblazing
Even with the potential benefits, Barker pointed out that there are still inherent risks involved. “We’re a privately held company,” he said, “and we’re taking on a large endeavor by being a leader in the LNG sector, in the U.S. and especially in the Great lakes.” Trailblazing a project of this magnitude places some uncertainty in the hands of the shipowner. After all, LNG infrastructure is yet to be developed on the Great Lakes, and LNG ships of such scale simply have not been operated there.
Additionally, there is financial risk. Barker did not want to address capital investments, but a Great Lakes Maritime Institute study found capital costs for LNG bulk carriers to be 15-20% higher on average than those of non-LNG ships. Barker did say that Interlake is constantly searching for ways to reduce the financial risk, either by finding ways to offset ECA effects or investigating the possibility of clean energy grant money.
One thing is certain: Interlake and Shell have the power to change Great Lakes operations on a very large scale over the coming years. Barker believes that if everything goes as planned, Interlake’s reward will be large and its impacts will be far-reaching. “This is an important project,” Barker said. “We’re helping to bring LNG to the Great lakes as a fuel source, not only for ships, but other modes of transportation.”
Interlake’s project is not only a significant step for shipping, but also for the United States, Barker added, “We’re supplying North America with raw materials from the U.S. to the U.S. plants using U.S. ships and now we’re going to use U.S. fuel. Once the concept is proven, it will be much likelier that other companies would look at converting or [using LNG] as a fuel source.” At that point, Barker insists, “I think a lot of the risk will be taken out of it.”


Scheduled to speak at SHIPPINGInsight 2013 in Stamford, CT in October, Interlake Steamship CEO Mark Barker will be featured on the Fuel and Propulsion Management panel. The panel will address the latest investments and challenges with LNG bunkering, efficiencies of LNG dual fuel design and the impacts of LNG training on efficient ship operations, among other fuel and LNG topics. www.shippinginsight.com/event-registration/

(As published in the 3Q edition of Maritime Professional - www.maritimeprofessional.com) 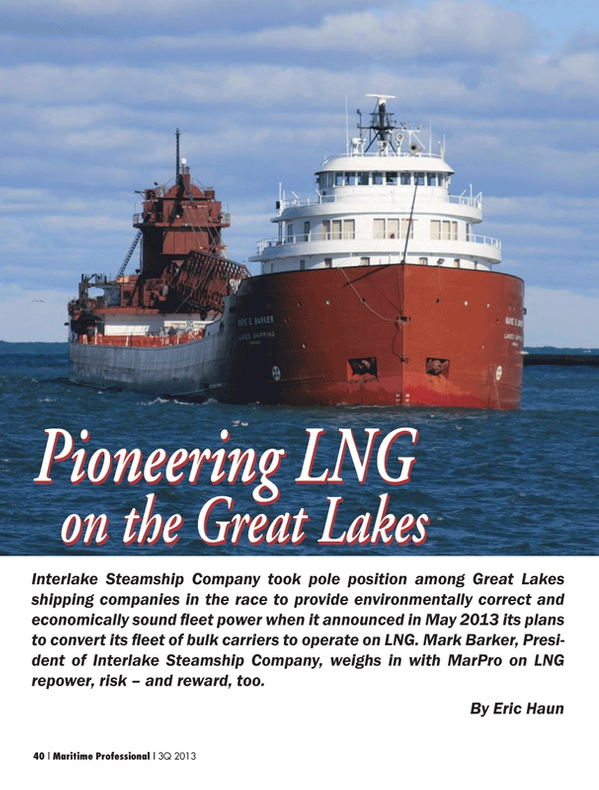