In a rural community in Nova Scotia, a small ocean technology company is making some noise in the design and manufacture of digital hydrophones. Ocean Sonics Ltd. of Great Village, was formed by President Mark Wood in 2012 after Wood developed the concept of the smart hydrophone in 2005 at his company, Instrument Concepts, a design and engineering firm. Ocean Sonics assumed the role of the design and manufacture of the icListen Smart Hydrophones. Ocean Sonics has a strong commitment to preserve the health of the world’s oceans through the continuous product research and development and listening to its customers.

“Underwater sound is one of the most important tools we have for understanding and studying the sea. It is vital for measuring the ocean’s health,” said Wood.

An engineer who started Instrument Concepts in 2000, Wood has an extensive background in acoustics having worked in the oil and gas industry and other ocean industries in Europe and the Gulf of Mexico.

Wood, a native of Fredericton, New Brunswick, who always had an interest in the sea, said the concept for the smart hydrophone was developed when “a customer wanted to do some listening in the ocean.”
The analog technology available was very slow and not suited to the task “so we digitalized it,” he said. The whole system was put into the water and the results sent to surface over a data link that worked well.
“That’s where the idea of putting the smarts in the hydrophone turned on some light bulbs,” he said. “We have a network interface on the hydrophone so we can actually access a web browser and talk to a hydrophone and change the way it does things.”
Wood has approximately a dozen people working at Ocean Sonics with over half the staff working on the technology of the hydrophone.

The company’s location in Great Village, a community of approximately 500 people, is located near the Bay of Fundy, an ideal testing ground for the products. In addition to the bay, there is a spring fed lake in the nearby Cobequid Mountains, a good place to do “quiet measurements,” said Wood.
“So we can test in the lab, test in a tank and test in open water. And we have a new calibration facility, so we have four-season testing capability,” he said.

Wood said the company also designs the smart hydrophones to work in certain water depths.
“We have one designed to work in 200 meters, we have one made of titanium that goes to 3,500 meters and also looking at one, also made of titanium, that will go to 6,000 meters,” he said, adding for about 90% of the company’s market, 3,500 meters is sufficient.
The Ocean Sonics’ president says there are a number of characteristics that make the company’s smart hydrophone different from the competition.

The most compelling, he says is, “Our instruments can provide unprocessed or processed acoustic data, according to the user’s needs. It can be configured to detect specific events, count and store events and send a message when an event is detected. We have introduced the idea of data budgeting, where users are encouraged to evaluate what is really needed for their project and configure the instrument to collect just that data.

“When done successfully, this can significantly reduce post-processing time or eliminate it.” Wood said the hydrophones are a “complete, self-contained, calibrated instrument.”
Wood continued, saying that the instrument is the “lowest self-noise of the acoustic data loggers or digital hydrophones available. This has been verified by three independent test laboratories. The instrument can be used as a data logger, streaming digital hydrophone or both at the same time.”
“Users of the icListen Smart Hydrophones are looking for precise measurement of sounds whether that is mammals, fish, crustaceans and other aquatic life, ships and boats, wave and wind, seismic, pile driving and air guns or other anthropogenic (man-made) noise in the ocean,” he said.
Man made noises, he noted, are becoming an ever increasing concern. “They are a new pollution of the sea. In fact, in Europe, man-made sound is officially a pollutant. That came about because of the busy shipping lanes.” He said the noise is interference to the signals of whales and porpoises within their communities.

Ocean Sonics has a variety of customers around the globe with the majority working with ocean sound.

“Our customers are in the offshore energy, renewable as well as oil and gas, ocean science, observatories, research institutions and also environmental monitoring companies,” he said.
Sounds impact sea mammals. During construction or pile driving in the ocean or in harbours, regulations dictate how loud sounds can be to protect sea life. The hydrophone can be set up to monitor these sounds and ensure they do not exceed required limits.
In a testimonial on the Ocean Sonics’ instruments, Ross Chapman, equipment Professor Emeritus at the University of Victoria, BC, wrote: “I have used many different hydrophones on different systems but these icListen hydrophones are the best I’ve seen in many years. They’re calibrated to very low frequencies where I have never been able to get reliable data.”

As is the case in most industry, Ocean Sonics has its challenges.

“One challenge we face is a lot of people are used to using traditional hydrophones and so we find it takes a lot of work to educate them on the new technology and its benefits,” he said. Another challenge is there is not always a level playing field when it comes to funding product development, he said.
Wood says it is challenging trying to stay ahead of the competition and doing just that is part of the company’s IP strategy through research and development.

Geographically, Wood sees market potential on the East Coast of Canada and the U.S. in the oil and gas industry and offshore wind energy and environmental companies in Europe. There is a lot of activity in Asia and Ocean Sonics looks at China with enthusiasm.  Ocean Sonics is also involved in tidal energy in the Bay of Fundy and the West Coast of Canada.

On the horizon are some big projects.  Wood sees potential in monitoring and detecting “where people want to have a system of hydrophones working together, monitoring and tracking sea life and shipping. The Atlantic Ocean, Pacific Ocean and Gulf of St Lawrence are exciting opportunities to study these interactions between anthropogenic sounds, natural sounds and aquatic life.”

The Ocean Sonics whale-tail logo symbolizes the company’s strong connection to the sea. The logo also represents the company’s commitment to helping wherever it can to preserve the health of our oceans. 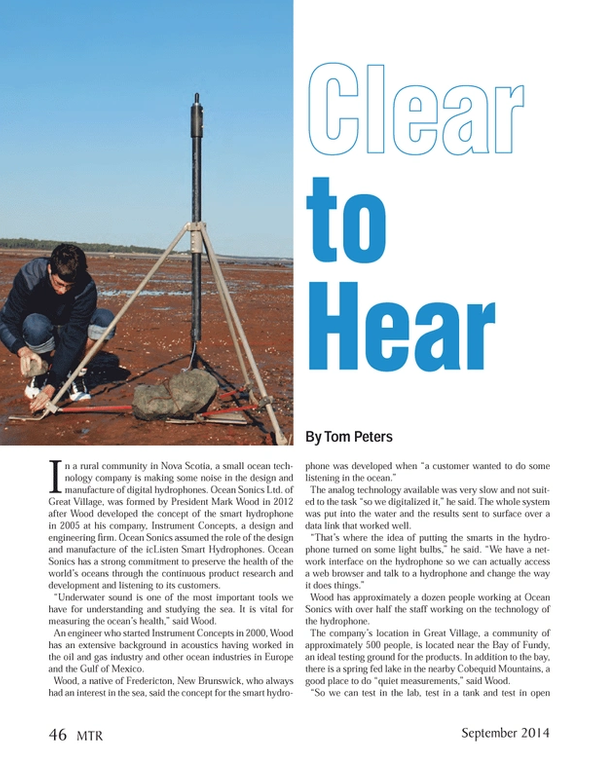