Triton Submarines  will introduce its newest model, the Triton 1000/3 LP (Low Profile) at the 2014 Monaco Yacht show.  Triton’s model line now includes 11 models configured for two to eight passengers with depth ratings from 1000 feet (305 meters) to 5500 feet (1675 meters) as well as the full ocean depth rated Triton 36000/3.
Yacht-based submersibles continue to gain popularity in the yachting community. Until now, size and weight restrictions for existing tender garages have kept many yachts from integrating a sub. Triton’s CEO, Bruce Jones thinks that is about to change. “The Triton 1000/3 LP will make it possible for most larger yachts to carry a submersible. It’s an absolute game changer and we are excited to be introducing the design in Monaco.”
At only 5.6 feet tall (1700 mm) with a modest crane weight of 7,650 pounds (3475 kg) the Triton 1000/3 LP is a light, compact three-passenger deep diving submersible (1000 foot/305 meter depth rating).
The Triton 1000/3 LP design was driven by the demand for a submersible design that could be integrated into existing superyacht tender garages without the need for a major refit. The design of 1000/3 LP utilizes a forward acrylic hyper-hemisphere for the two passengers and a rear steel hyper-hemisphere for the pilot and internal systems. This arrangement utilizes smaller spheres while also providing for a design that does not require a large external frame. 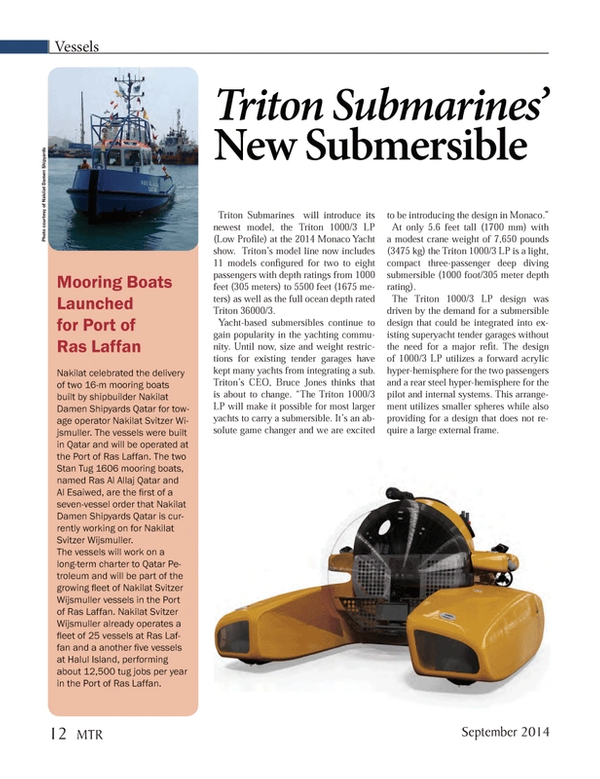