By Michael B. Jones

If You Can’t Measure It, You Can’t Manage it … or Get Attention and Funding!

Understanding and promoting the Blue Economy and BlueTech is critical for the future of the U.S. and the world.  Yet we don’t know in the U.S. and around the world how big our ocean and maritime tech industries are.  Why?  Because in most countries traditional, “visible” maritime industries (e.g. fishing and shipbuilding) have been on a decline while fast growing BlueTech companies have been largely invisible.  Why are they invisible?
First, BlueTech manufacturers typically sell 98-99% outside of wherever they are located so they don’t belong to the local Chamber of Commerce or Economic Development Agency nor do politicians know they exist. Second, because BlueTech companies are so diverse, while most belong to relevant industry associations, it is not immediately obvious why they should participate in a regional cluster association that represents companies linked primarily by all being ocean related.  And on an institutional level, economic industry codes (e.g. NAICS codes for Canada, Mexico and the U.S. in NAFTA) sweep BlueTech companies into larger land-based categories so there is no baseline Blue Economy to assess.  Why should economic development and elected officials pay attention if there is no way to understand the current economic value of the oceans let alone future potential?
We need to create a national Blue Voice in every country.  We need to create formal BlueTech clusters around the U.S. and around the world to develop a local/regional Blue Voice that regional officials can “hear” and support.  And we need to change economic activity codes because both manufacturing processes and products/services for the oceans are very different from those on land.

The Maritime Alliance
The Maritime Alliance (www.themaritimealliance.org) was created in 2007 and The Maritime Alliance Foundation (TMA Foundation) (www.tmafoundation.org) was established in 2013.  TMA is a 501c6 advocacy-oriented non-profit that is the organizer of the San Diego maritime technology cluster (essentially a BlueTech industry association) focused on: Economic Development; Ecosystem Development; and Community Outreach.  TMAF is a 501c3 education-oriented non-profit focused on: Workforce Development (including OceanSTEM); Research; and National/International Outreach.  We believe in creating BlueTech and Blue Jobs by promoting sustainable, science-based ocean industries.  We do this by bringing education, policy and technology resources together to promote innovation and economic development in the Blue Economy and to create a Blue Voice.
TMAF has worked with partners to prepare a series of research studies to understand the value of the Blue Economy and BlueTech in San Diego.  But we do not believe that we are unique in the U.S.  We represent the biggest concentrated cluster with an estimated 200 BlueTech organizations, but we estimate there are 4,000+ BlueTech companies nationally that have never been studied like we have begun to study our region. We use our cluster and unique studies as a case study to help encourage other parts of the U.S. to create formal BlueTech clusters.
The San Diego Maritime Industry Report 2012 is the base study of the regional Blue Economy showing (based on 2011 data) 46,000 direct jobs and $14 billion in direct revenue annually.  The Maritime Alliance represents the maritime technology or BlueTech sub-industry group, which was invisible until we organized the cluster.  BlueTech proved to be the largest, fastest-growing part of the local Blue Economy with 19,000 direct jobs and $6.2 billion in direct revenue.  Many of our BlueTech companies are growing 15-35% per annum typically with 98-99% sales outside the San Diego region of which 40-60+% are exports.  The San Diego Regional Economic Development Council now considers us to be a key cluster in the regional Innovation Economy.
On July 21, 2014 – the last day of the 60 day comment period – The Maritime Alliance submitted a document requesting changes under the 2017 NAICS revision process.  To put this in perspective, the San Diego Report showing $14 billion in direct revenue (before indirect and induced job consideration) did not include tourism.  Based on current NAICS codes, the NOAA National Ocean Watch portal calculates that “All Ocean Sectors” in San Diego County in 2011 were $5.6 billion, which included $3.8 billion of tourism and recreation.  So that would be $1.8 billion (net of tourism) in ocean industries.  In the 2012 report, $1.4 billion was identified as “Traditional Maritime Exclusive Industries” which one could roughly compare with the NOAA number of $1.8 billion.  The other two big segments in the San Diego report are “Maritime Technology” of $6.2 billion and “Other Maritime” of $6.5 billion for companies that included some maritime, which are not captured as maritime related revenue by NAICS today.
But we are much more than research studies.  Our contribution to STEM (Science, Technology, Engineering, & Mathematics) education is the OceanSTEM initiative – the branding of STEM related to oceans.  We have unique posters developed to capture the attention of young adults to see their future in the Ocean Technology Industry.  A cornerstone of OceanSTEM is collaboration and we are pleased to work with more than 60 organizations and companies across the county. And we helped organize a regional Workforce Development effort with educators and workforce development agencies, including those focused on veteran transition to the private sector, to start preparing for the next generation of engineers and techs that will be needed to support the growth of the regional Blue Economy.
On the Economic Development and Business Ecosystem Development side, we will put on or support more than 20 events in 2014 including our biggest event of the year – the 6th annual BlueTech and Blue Economy Summit and Tech Expo scheduled for Nov. 12-13 in San Diego.  As they have gotten to know each other, some of our BlueTech companies have found ways to collaborate and new companies have formed.   One such example is Ocean Aero (www.oceanaero.us) that is developing the Submaran – a patent-pending, hybrid unmanned surface and underwater vehicle.  And we are educating bankers, economic development & elected officials, investors, insurance agents, lawyers and other professionals so they will support regional BlueTech companies.
On the National & International Outreach side, we are pleased to be working with a number of organizations nationally and internationally.  Of particular note is our work with the NOAA U.S. IOOS office on the economic value of ocean observation for the U.S.; multi-year collaboration with CICESE in Ensenada, Mexico; our MOU with the vibrant ocean tech cluster in St. John’s, Canada; our participation with the “Maritime Innovative Territories International Network” (MiTiN) created in July 2012 by the ocean tech cluster in Brest, France; and our recent work with the University of Southern Mississippi as it prepares to organize a BlueTech cluster on the Gulf.
To learn more, please visit our websites, contact me, and participate in our 6th annual BlueTech and Blue Economy Summit on Nov. 12-13.  The Maritime Gala Dinner & Award Ceremony is a highlight on the evening of Day 1.  Rick Spinrad, the new Chief Scientist at NOAA, will be the after-dinner speaker addressing “Blue is the new Green – Promoting OceanSTEM, Maritime Workforce Development and a national Blue Voice”.
We thank the Marine Technology Reporter for agreeing to be our Industry Media Sponsor this year! 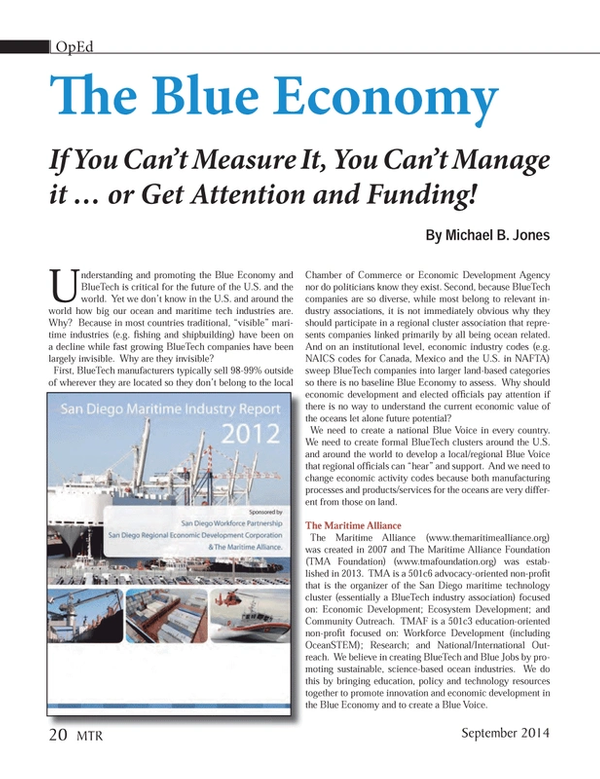