Ever since man has taken vessels onto the seas, mariners have reported encounters with monstrous waves that seem to arise out of nowhere from an otherwise average sea state.  On his third voyage to the New World in 1498, Christopher Columbus recorded in his logbook that a giant wave lifted up his vessels as they transited the waterway between the Paria Peninsula of Venezuela and the island of Trinidad, a waterway he then named Bocas del Dragón (the Mouths of the Dragon).  In 1853, the ship Annie Jane carrying 500 emigrants from England to Canada was struck by a monstrous wave off the Outer Hebrides and sank.  Only 100 persons survived.  In 1943, the ocean liner RMS Queen Mary, converted to a troop carrier, was crossing the North Atlantic at high speed when it was struck by two rogue waves in rapid succession.  The ship survived, but it had rolled 52 degrees before slowly recovering.  The waves broke windows on the bridge 90 feet above the waterline.  On June 14, 1968, the 736-foot tanker World Glory was off the southeast coast of South Africa when it was suddenly struck by two waves of an estimated height of 70 feet each.  The first wave put the ship in a hogging position, cracking the main deck.  The second wave produced sagging forces that broke the ship into two and sinking it.  Ten crew members survived to tell their tale.  On March 2, 2001, the cruise ship Caledonian Star was crossing the Southern Ocean after a visit to the Antarctic Peninsula when it was struck by a rogue wave estimated to be in excess of 90 feet high.  The wave broke through the bridge windows, toppled and injured the first mate and the helmsman.  The ship rolled heavily, but was about to recover and make it to port without further incident. Meteorologists and oceanographers discounted the reports as exaggerations because they could not duplicate the phenomenon ashore and because the mathematical formula that they utilized to predict wave heights would not yield waves anywhere near the heights reported by mariners.  This all changed on January 1, 1995.  At the Draupner offshore oil platform in the North Sea, significant wave heights of 36 ft. were being automatically recorded.  At about 3:30 pm, a single wave of over 80 ft. was measured.  Scientists could no longer ignore the mariners’ reports.  They determined that they had been using the wrong mathematical formula.  For one thing, instead of adding the wave heights, they should have been adding the wave energies.  Rogue waves are now defined as waves whose height is more than twice the significant wave height.  Significant wave height is the mean of the largest third of the prevailing waves.
As the scientists adapted to the new reality, they learned, using non-linear equations, to configure wave-tank experiments to simulate the conditions for generation of rogue waves, but on a smaller scale.  They learned that rogue waves can occur when a storm swell encounters an opposing powerful current, a not-uncommon situation in the North Atlantic’s Gulf Stream or in the Agulhas Current of the Indian Ocean off South Africa.  Large storms can generate powerful wave systems capable of traveling many miles into areas with relatively calmer conditions.  If such a powerful wave system comes up against a strong current in a crossing situation, the stage is set for one or more rogue waves to be generated.  Scientists, risk managers, and governments are now attempting to predict rogue waves.
At the European Center for Medium-Range Weather Forecasting, scientists use the Benjamin-Feir Index to make twice-daily forecasts for marine areas measuring 20 km on each side.  If forecast conditions meet the index’s standard, a rogue wave warning is issued.  Theoretically it is possible for a ship carrying sophisticated sensors and powerful computers to create a three-dimensional map of the sea state and calculate whether a rogue wave is imminent.  Until that becomes possible, ships will have to rely on the available, but imprecise predictions from ashore.
Utilizing a different approach, the European Union (EU) funded a project called Extreme Seas between 2009 and 2013.  It brought together meteorologists, oceanographers, researchers, and naval architects for the purpose of designing vessels so as to better withstand the forces generated by rogue waves.  The jury is still out on whether there has been meaningful progress in this effort.
Climate change indicates that an increasing amount of energy is manifesting itself in Earth’s atmosphere.  This may result in additional and stronger storms, increasing the likelihood of rogue waves on the world’s oceans.
The cruise ship Louis Majesty departed Barcelona on March 3, 2010 for a routine voyage across the Mediterranean Sea to Genoa.  There were about 1,000 passengers and a crew of 600 on board.  Three hours out of port, in moderately stormy weather, the ship was suddenly hit by three rogue waves.  As the ship rolled and pitched, a wall of water smashed through the windows of the lounge on Deck 5, over fifty feet above the normal waterline.  Two passengers were killed and 14 were injured.  The tragic incident was filmed (as is almost everything these days) by cell phone cameras.  The video is very telling.  As passengers are milling about the lounge and a buffet meal is being served, a wave suddenly breaks through the windows, throwing passengers to the deck and sending furniture across the room.  The sea state quickly returned to normal and the vessel returned to port.  A hindcast later revealed that a powerful wave train from the northeast had converged with another powerful wave train from the southeast at the location in the Mediterranean just as the Louis Majesty was traversing.  This type of incident may occur more frequently in the future.
Now that stakeholders are more aware of the problem, efforts can be undertaken to reduce the risk of further rogue wave encounters.  Ships can be more ruggedly constructed.  Meteorological and oceanographic forecasts can be made more precise and timely.  On-board technology can be improved.  In the meantime, keep a sharp lookout.

(As published in the September2014 edition of Marine Technology Reporter - http://www.marinetechnologynews.com/Magazine) 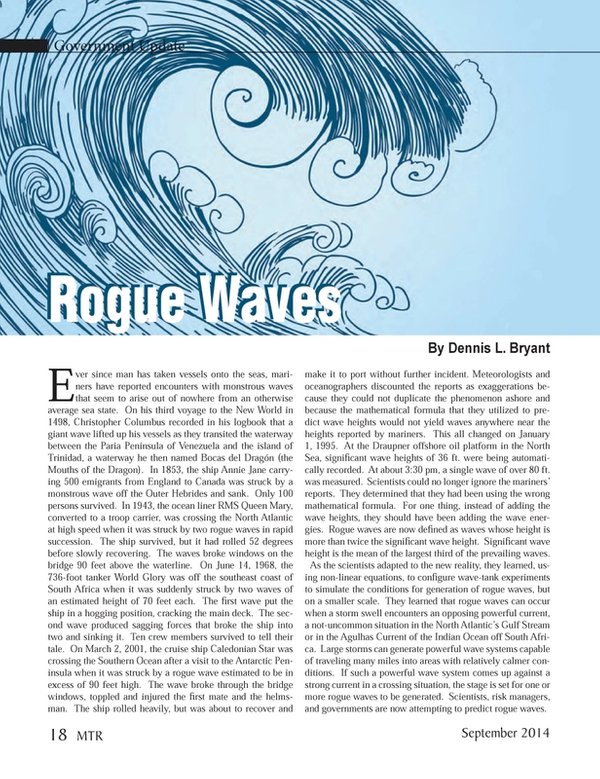