The Wave Glider is a remote control ocean robot, which uses wave motion as propulsion. As an autonomous marine vehicle, the Wave Glider is capable of conducting detailed meteorological and oceanographic surveys across large distances and under the most extreme wind and sea conditions. Since its inception, the Wave Glider has seen the roles it is capable of undertaking greatly expanded, with the Wave Glider becoming a key Metocean measurement asset for research institutes, academia, shipping companies, government agencies and oil companies. Marine Technology Reporter’s Contributing Editor Claudio Paschoa spoke with Sudhir Pai, Vice President, Technology and Operations of Liquid Robotics Oil and Gas (LROG), a joint venture with Schlumberger, about the qualities and capabilities of the Wave Glider.

The Wave Gliders are in a distinctly different class of AUVs from previous gliders in that they are wave-propelled with continuous diurnal solar panel support of electrical systems. A sensor platform like the Wave Glider is capable of detecting solid data at depths where satellites data is unreliable. Sudhir explains the vision behind the design of the Wave Glider and how its development process occurred, “The Wave Glider development began out of a man’s passion for whale songs. Joe Rizzi, Chairman, Jupiter Research Foundation, had a love for the sounds of whales as they migrated along the coasts of Hawai’i to Alaska. In order to capture their songs live, he enlisted Roger Hine, a mechanical engineer and robotics expert, to help develop an unmoored, station-keeping data buoy. A joint venture then began between Joe and Roger Hine. The initial prototyping and early testing was from approximately 2003 - 2008. Development of the first commercially available system followed in 2009 with extensive sea trials and broad market sales in 2010,” said Sudhir Pai.
This surfboard-shaped vehicle, contains photovoltaic panels that continually replenish the lithium-ion batteries used to power its navigation, communication systems, computing and sensor payloads. Wave Gliders may also carry submerged sensor payloads underneath their wave-powered wings and rudder assembly, which are connected to the glider body by an umbilical. The low-profile surface float, high-strength umbilical and sturdy sub allow the vehicle to carry on through high winds and waves of the open ocean. The sub is sheltered from surface weather conditions and acts as a drift anchor to counter the effects of wind and wave on the surface float. During storms, it cuts through a wave and in stern seas it can surf waves too. This unique mode of propulsion allows tremendous range and duration of sampling at the air-surface-underwater interface as it uses wave energy for thrust and solar energy to power its rudder motor, navigation system and payload electronics.

The System
The Wave Glider system consists of a surface float and a submerged glider, connected by an electromechanical umbilical. The float weighs about 68 kg (150 lb.) with a standard payload and measures 208 X 60 cm (82 X 24 in). Its deck supports antennae for GPS, satellite communications and collision avoidance systems, as well as a mast to support a position marker light and flag for increased visibility. Seven smart battery packs housed within the float are each electrically isolated with separate discharging and monitoring circuitry that permits only two batteries to be in use at a time. Two payload bays support a total of 18 kg (40 lb.) of sensors and equipment. The umbilical, about 5.8 m (19 ft.) long, provides a robust, yet flexible connection between the surface float and submerged glider and transmits power and steering commands to the glider. The submerged glider, or sub, is 2 m (6.5 ft.) long. The sub glides on six pairs of underwater wings that propel the entire Wave Glider system forward. The sub frame supports a rudder and its control package. The sub frame weighs about 68kg. The combination of a very low-profile surface float, high-strength command umbilical and the weight of the sub allow the vehicle to carry on through huge waves and fierce wind.
“Initial funding for the Wave Glider development was created by Joe Rizzi and private investors. Subsequently, funding was provided by lead investors; Vantage Point Capital Partners (VPCP), Riverwood Capital and Schlumberger. The Wave Glider SV Series is comprised of the Wave Glider SV2 and Wave Glider SV3. They are positioned akin to the BMW Series of cars – different performance characteristics and features at different price points. The Wave Glider SV3 is a larger platform with modular power and payload capacity; it has an auxiliary thruster to navigate through extreme ocean conditions (doldrums to high currents).  In addition, the Wave Glider SV3 has an advanced operating environment with autonomy, automatic ship identification, avoidance features and enhancements for data delivery and communications,” said Sudhir. To date, Liquid Robotics Oil and Gas, a JV between Schlumberger and Liquid Robotics Inc, has 44 of the Wave Glider SV2 platform and 25 of the Wave Glider SV3 platform. Later this year they plan to acquire an additional 25 Wave Glider SV3 platform to have a total fleet of 94 Wave Gliders conducting various missions around the globe. “The Wave Gliders are used around the world for climate change, ocean acidification, environmental monitoring, fish tracking, tsunami prediction and severe weather observation and monitoring. Oceanographic institutions such as Woods Hole Oceanographic Institute, Scripps Institution of Oceanology, Monterey Bay Aquarium Research Institution, along with international environmental research organizations such as the National Oceanographic Institute in the UK are all using Wave Gliders for long duration ocean observation,” said Sudhir Pai. Wave Gliders are manufactured and assembled in California. The float is made from advanced composite materials and the glider (submarine) section is made from stainless steel with some parts made from titanium. All sensors are acquired from industry recognized, top of the range companies. The Acoustic Doppler Current Profiler (ADCP) is made by Teledyne-RDI; the weather station is made by Airmar; wave height sensor form Data Well; Acoustic Modems from Sonardyne; MAG sensors from Marine Magnetics. Hydrocarbon fluorometers are made by Turner Inc. and Chelsea Instruments. 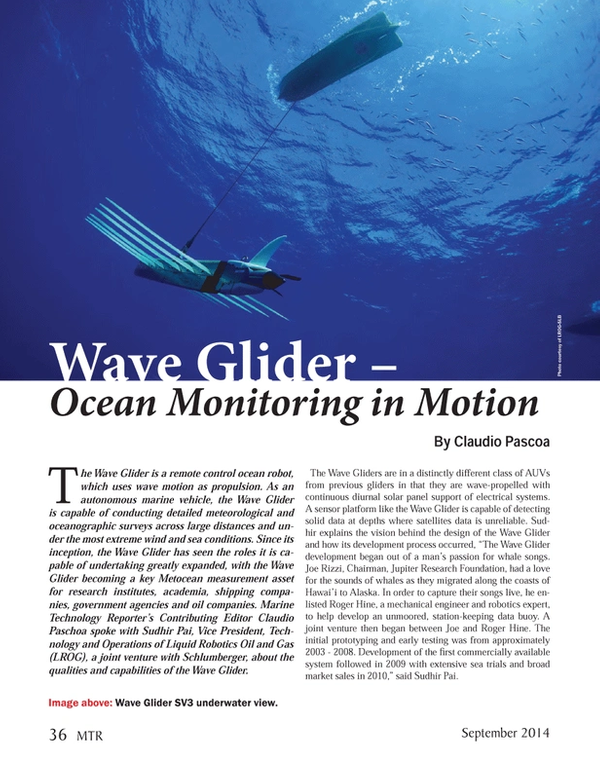