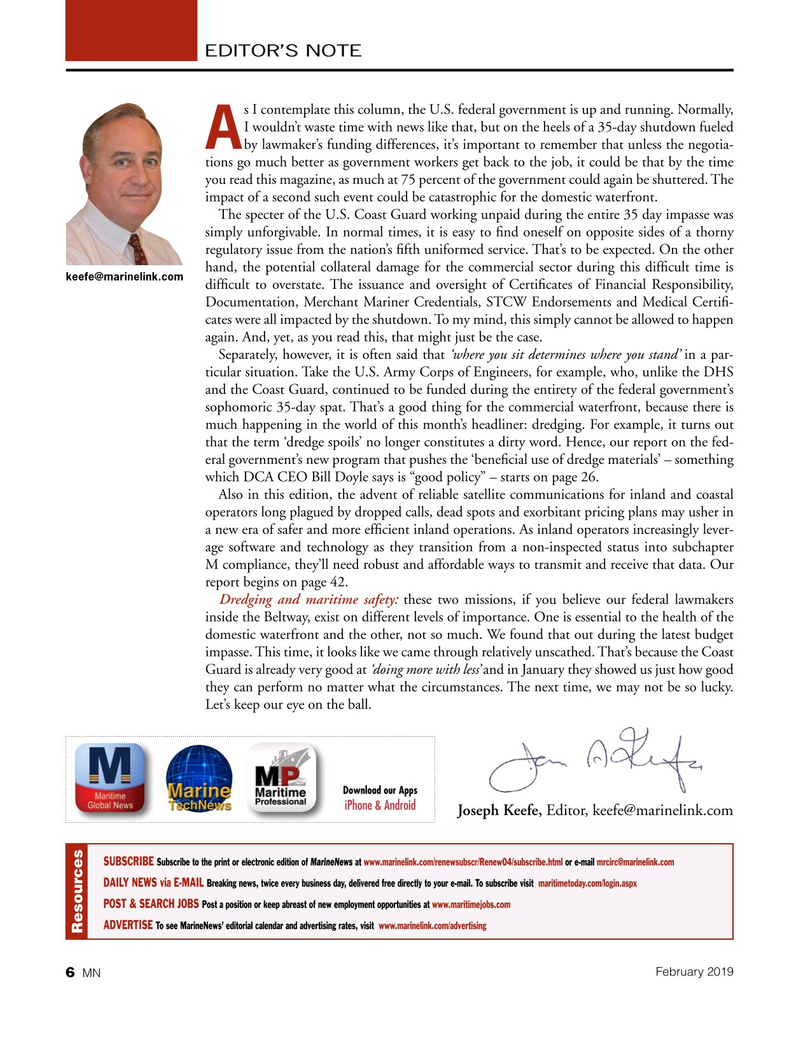 EDITOR’S NOTE s I contemplate this column, the U.S. federal government is up and running. Normally,

I wouldn’t waste time with news like that, but on the heels of a 35-day shutdown fueled

A by lawmaker’s funding differences, it’s important to remember that unless the negotia- tions go much better as government workers get back to the job, it could be that by the time you read this magazine, as much at 75 percent of the government could again be shuttered. The impact of a second such event could be catastrophic for the domestic waterfront.

The specter of the U.S. Coast Guard working unpaid during the entire 35 day impasse was simply unforgivable. In normal times, it is easy to fnd oneself on opposite sides of a thorny regulatory issue from the nation’s ffth uniformed service. That’s to be expected. On the other hand, the potential collateral damage for the commercial sector during this diffcult time is keefe@marinelink.com diffcult to overstate. The issuance and oversight of Certifcates of Financial Responsibility,

Documentation, Merchant Mariner Credentials, STCW Endorsements and Medical Certif- cates were all impacted by the shutdown. To my mind, this simply cannot be allowed to happen again. And, yet, as you read this, that might just be the case.

Separately, however, it is often said that ‘where you sit determines where you stand’ in a par- ticular situation. Take the U.S. Army Corps of Engineers, for example, who, unlike the DHS and the Coast Guard, continued to be funded during the entirety of the federal government’s sophomoric 35-day spat. That’s a good thing for the commercial waterfront, because there is much happening in the world of this month’s headliner: dredging. For example, it turns out that the term ‘dredge spoils’ no longer constitutes a dirty word. Hence, our report on the fed- eral government’s new program that pushes the ‘benefcial use of dredge materials’ – something which DCA CEO Bill Doyle says is “good policy” – starts on page 26.

Also in this edition, the advent of reliable satellite communications for inland and coastal operators long plagued by dropped calls, dead spots and exorbitant pricing plans may usher in a new era of safer and more effcient inland operations. As inland operators increasingly lever- age software and technology as they transition from a non-inspected status into subchapter

M compliance, they’ll need robust and affordable ways to transmit and receive that data. Our report begins on page 42.

Dredging and maritime safety: these two missions, if you believe our federal lawmakers inside the Beltway, exist on different levels of importance. One is essential to the health of the domestic waterfront and the other, not so much. We found that out during the latest budget impasse. This time, it looks like we came through relatively unscathed. That’s because the Coast

Guard is already very good at ‘doing more with less’ and in January they showed us just how good they can perform no matter what the circumstances. The next time, we may not be so lucky.

Let’s keep our eye on the ball.

Post a position or keep abreast of new employment opportunities at www.maritimejobs.com