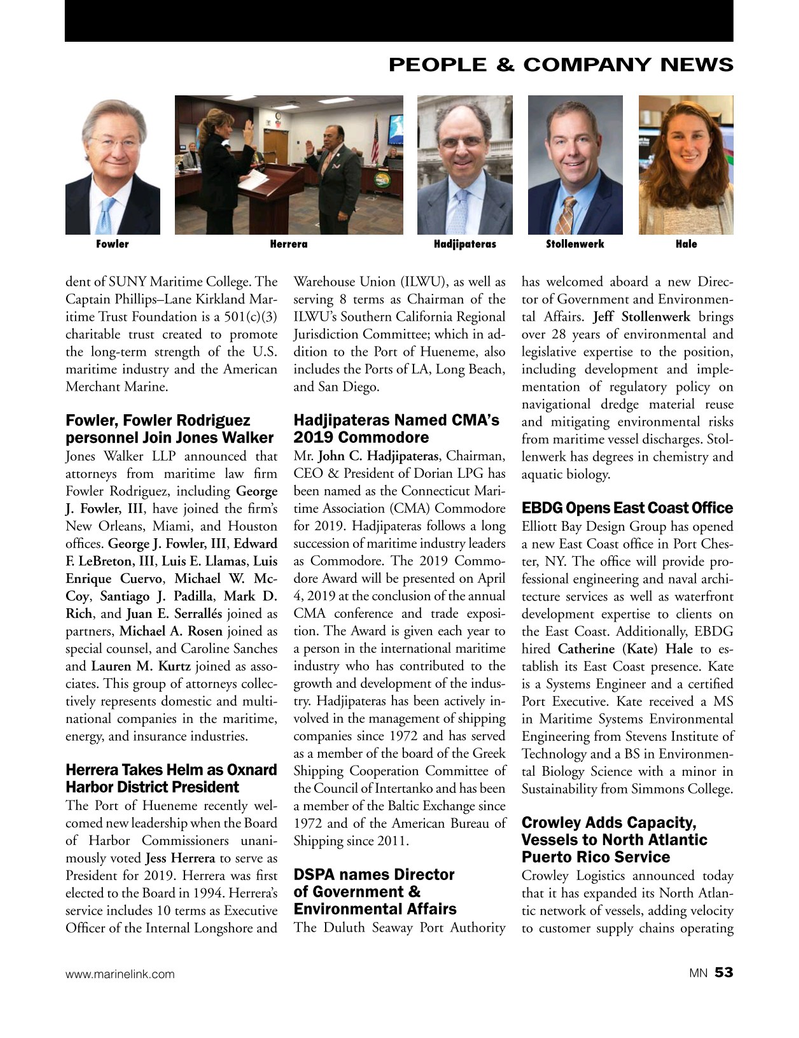 Herrera Fowler Hadjipateras Stollenwerk Hale dent of SUNY Maritime College. The Warehouse Union (ILWU), as well as has welcomed aboard a new Direc-

Captain Phillips–Lane Kirkland Mar- serving 8 terms as Chairman of the tor of Government and Environmen- itime Trust Foundation is a 501(c)(3) ILWU’s Southern California Regional tal Affairs. Jeff Stollenwerk brings charitable trust created to promote Jurisdiction Committee; which in ad- over 28 years of environmental and the long-term strength of the U.S. dition to the Port of Hueneme, also legislative expertise to the position, maritime industry and the American includes the Ports of LA, Long Beach, including development and imple-

Fowler Rodriguez, including George been named as the Connecticut Mari-

Coy, Santiago J. Padilla, Mark D. 4, 2019 at the conclusion of the annual tecture services as well as waterfront

Rich, and Juan E. Serrallés joined as CMA conference and trade exposi- development expertise to clients on partners, Michael A. Rosen joined as tion. The Award is given each year to the East Coast. Additionally, EBDG special counsel, and Caroline Sanches a person in the international maritime hired Catherine (Kate) Hale to es- and Lauren M. Kurtz joined as asso- industry who has contributed to the tablish its East Coast presence. Kate ciates. This group of attorneys collec- growth and development of the indus- is a Systems Engineer and a certifed tively represents domestic and multi- try. Hadjipateras has been actively in- Port Executive. Kate received a MS national companies in the maritime, volved in the management of shipping in Maritime Systems Environmental energy, and insurance industries. companies since 1972 and has served Engineering from Stevens Institute of as a member of the board of the Greek Technology and a BS in Environmen-

Shipping Cooperation Committee of tal Biology Science with a minor in

Harbor District President the Council of Intertanko and has been Sustainability from Simmons College.

President for 2019. Herrera was frst Crowley Logistics announced today of Government & elected to the Board in 1994. Herrera’s that it has expanded its North Atlan-