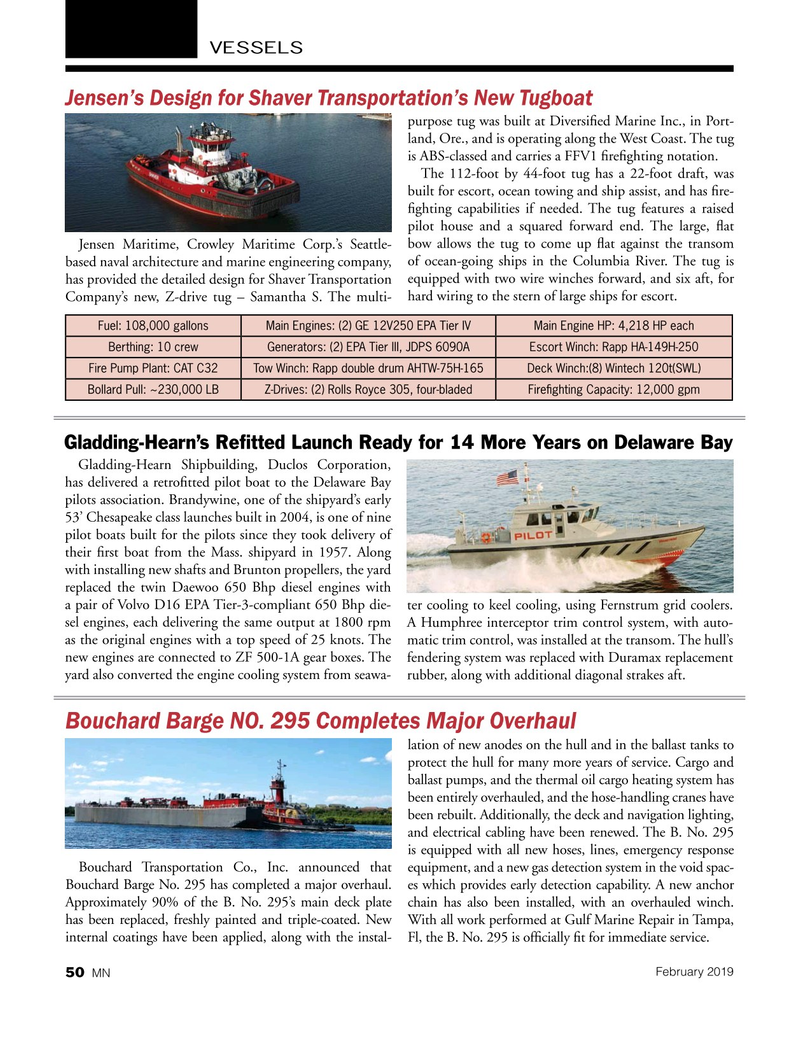 Jensen’s Design for Shaver Transportation’s New Tugboat purpose tug was built at Diversifed Marine Inc., in Port- land, Ore., and is operating along the West Coast. The tug is ABS-classed and carries a FFV1 frefghting notation.

The 112-foot by 44-foot tug has a 22-foot draft, was built for escort, ocean towing and ship assist, and has fre- fghting capabilities if needed. The tug features a raised pilot house and a squared forward end. The large, fat

Jensen Maritime, Crowley Maritime Corp.’s Seattle- bow allows the tug to come up fat against the transom based naval architecture and marine engineering company, of ocean-going ships in the Columbia River. The tug is has provided the detailed design for Shaver Transportation equipped with two wire winches forward, and six aft, for

Gladding-Hearn Shipbuilding, Duclos Corporation, has delivered a retroftted pilot boat to the Delaware Bay pilots association. Brandywine, one of the shipyard’s early 53’ Chesapeake class launches built in 2004, is one of nine pilot boats built for the pilots since they took delivery of their frst boat from the Mass. shipyard in 1957. Along with installing new shafts and Brunton propellers, the yard replaced the twin Daewoo 650 Bhp diesel engines with a pair of Volvo D16 EPA Tier-3-compliant 650 Bhp die- ter cooling to keel cooling, using Fernstrum grid coolers. sel engines, each delivering the same output at 1800 rpm A Humphree interceptor trim control system, with auto- as the original engines with a top speed of 25 knots. The matic trim control, was installed at the transom. The hull’s new engines are connected to ZF 500-1A gear boxes. The fendering system was replaced with Duramax replacement yard also converted the engine cooling system from seawa- rubber, along with additional diagonal strakes aft.

Bouchard Barge NO. 295 Completes Major Overhaul lation of new anodes on the hull and in the ballast tanks to protect the hull for many more years of service. Cargo and ballast pumps, and the thermal oil cargo heating system has been entirely overhauled, and the hose-handling cranes have been rebuilt. Additionally, the deck and navigation lighting, and electrical cabling have been renewed. The B. No. 295 is equipped with all new hoses, lines, emergency response

Approximately 90% of the B. No. 295’s main deck plate chain has also been installed, with an overhauled winch. has been replaced, freshly painted and triple-coated. New With all work performed at Gulf Marine Repair in Tampa, internal coatings have been applied, along with the instal- Fl, the B. No. 295 is offcially ft for immediate service.