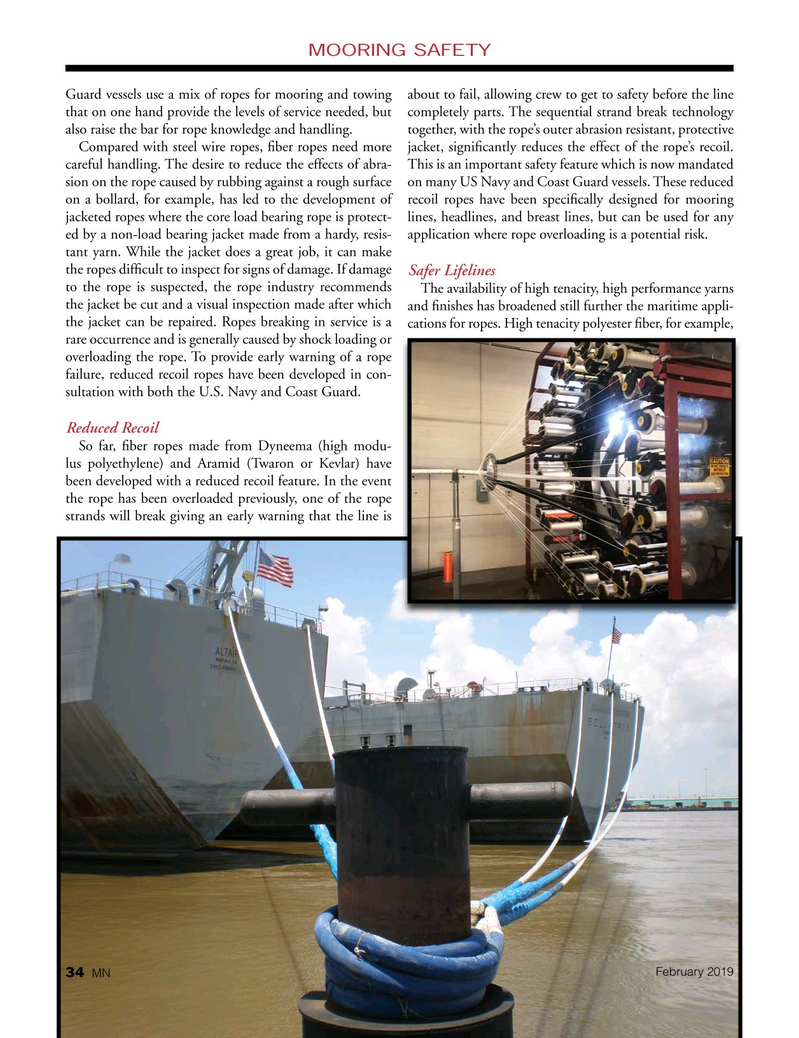 Guard vessels use a mix of ropes for mooring and towing about to fail, allowing crew to get to safety before the line that on one hand provide the levels of service needed, but completely parts. The sequential strand break technology also raise the bar for rope knowledge and handling. together, with the rope’s outer abrasion resistant, protective

Compared with steel wire ropes, fber ropes need more jacket, signifcantly reduces the effect of the rope’s recoil. careful handling. The desire to reduce the effects of abra- This is an important safety feature which is now mandated sion on the rope caused by rubbing against a rough surface on many US Navy and Coast Guard vessels. These reduced on a bollard, for example, has led to the development of recoil ropes have been specifcally designed for mooring jacketed ropes where the core load bearing rope is protect- lines, headlines, and breast lines, but can be used for any ed by a non-load bearing jacket made from a hardy, resis- application where rope overloading is a potential risk. tant yarn. While the jacket does a great job, it can make the ropes diffcult to inspect for signs of damage. If damage

Safer Lifelines to the rope is suspected, the rope industry recommends

The availability of high tenacity, high performance yarns the jacket be cut and a visual inspection made after which and fnishes has broadened still further the maritime appli- the jacket can be repaired. Ropes breaking in service is a cations for ropes. High tenacity polyester fber, for example, rare occurrence and is generally caused by shock loading or overloading the rope. To provide early warning of a rope failure, reduced recoil ropes have been developed in con- sultation with both the U.S. Navy and Coast Guard.

So far, fber ropes made from Dyneema (high modu- lus polyethylene) and Aramid (Twaron or Kevlar) have been developed with a reduced recoil feature. In the event the rope has been overloaded previously, one of the rope strands will break giving an early warning that the line is