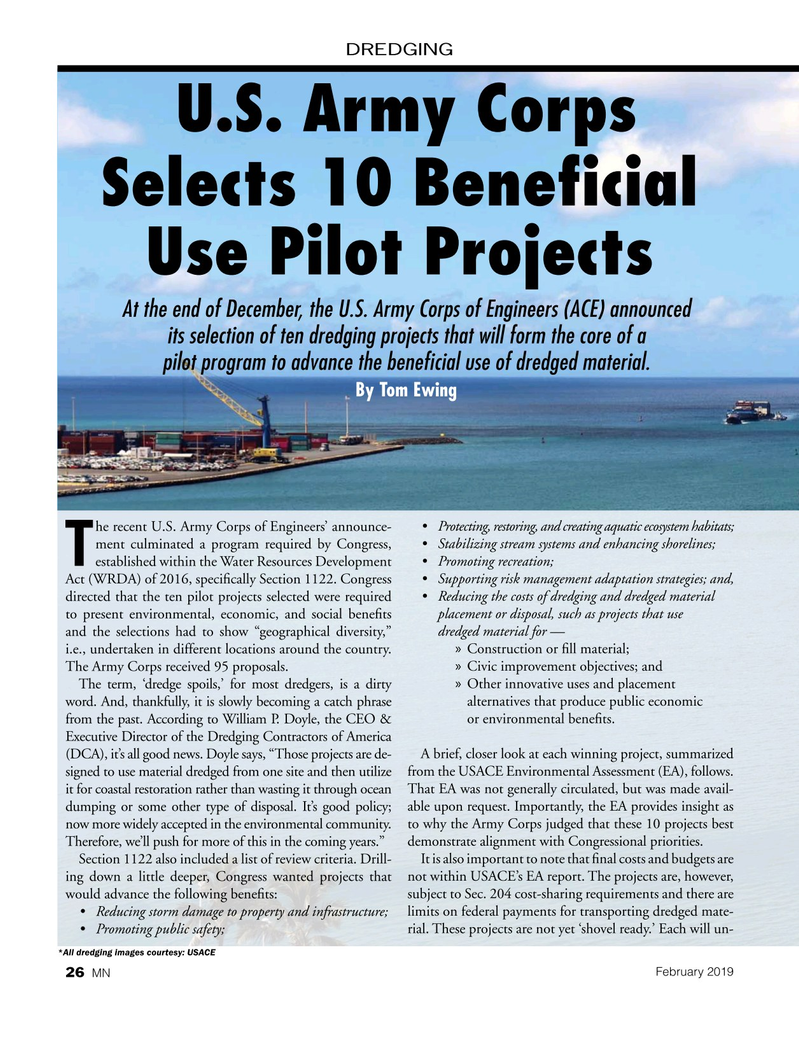 At the end of December, the U.S. Army Corps of Engineers (ACE) announced its selection of ten dredging projects that will form the core of a pilot program to advance the benefcial use of dredged material.

Act (WRDA) of 2016, specifcally Section 1122. Congress • Supporting risk management adaptation strategies; and, directed that the ten pilot projects selected were required • Reducing the costs of dredging and dredged material to present environmental, economic, and social benefts placement or disposal, such as projects that use and the selections had to show “geographical diversity,” dredged material for — i.e., undertaken in different locations around the country. »Construction or fll material;

The term, ‘dredge spoils,’ for most dredgers, is a dirty »Other innovative uses and placement word. And, thankfully, it is slowly becoming a catch phrase alternatives that produce public economic from the past. According to William P. Doyle, the CEO & or environmental benefts.

Executive Director of the Dredging Contractors of America (DCA), it’s all good news. Doyle says, “Those projects are de- A brief, closer look at each winning project, summarized signed to use material dredged from one site and then utilize from the USACE Environmental Assessment (EA), follows. it for coastal restoration rather than wasting it through ocean That EA was not generally circulated, but was made avail- dumping or some other type of disposal. It’s good policy; able upon request. Importantly, the EA provides insight as now more widely accepted in the environmental community. to why the Army Corps judged that these 10 projects best

Therefore, we’ll push for more of this in the coming years.” demonstrate alignment with Congressional priorities.

Section 1122 also included a list of review criteria. Drill- It is also important to note that fnal costs and budgets are ing down a little deeper, Congress wanted projects that not within USACE’s EA report. The projects are, however, would advance the following benefts: subject to Sec. 204 cost-sharing requirements and there are • Reducing storm damage to property and infrastructure; limits on federal payments for transporting dredged mate- • Promoting public safety; rial. These projects are not yet ‘shovel ready.’ Each will un- *All dredging images courtesy: USACE