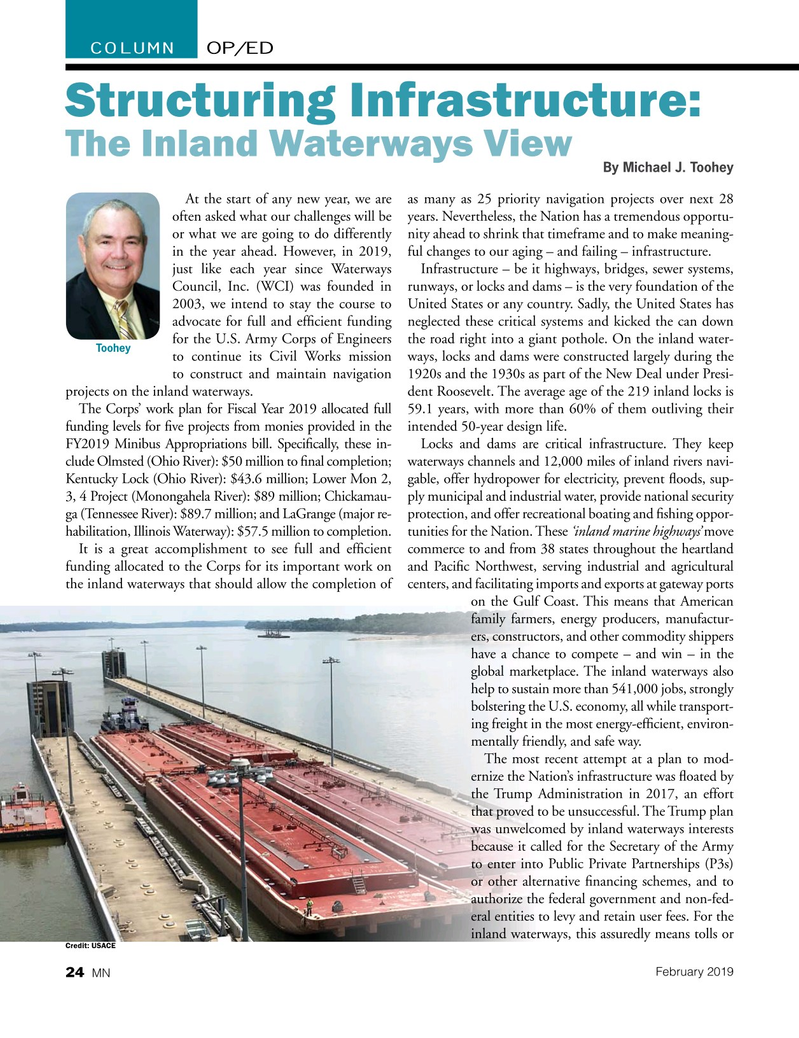 At the start of any new year, we are as many as 25 priority navigation projects over next 28 often asked what our challenges will be years. Nevertheless, the Nation has a tremendous opportu- or what we are going to do differently nity ahead to shrink that timeframe and to make meaning- in the year ahead. However, in 2019, ful changes to our aging – and failing – infrastructure. just like each year since Waterways Infrastructure – be it highways, bridges, sewer systems,

Council, Inc. (WCI) was founded in runways, or locks and dams – is the very foundation of the 2003, we intend to stay the course to United States or any country. Sadly, the United States has advocate for full and effcient funding neglected these critical systems and kicked the can down for the U.S. Army Corps of Engineers the road right into a giant pothole. On the inland water-

Toohey to continue its Civil Works mission ways, locks and dams were constructed largely during the to construct and maintain navigation 1920s and the 1930s as part of the New Deal under Presi- projects on the inland waterways. dent Roosevelt. The average age of the 219 inland locks is

The Corps’ work plan for Fiscal Year 2019 allocated full 59.1 years, with more than 60% of them outliving their funding levels for fve projects from monies provided in the intended 50-year design life.

It is a great accomplishment to see full and effcient commerce to and from 38 states throughout the heartland funding allocated to the Corps for its important work on and Pacifc Northwest, serving industrial and agricultural the inland waterways that should allow the completion of centers, and facilitating imports and exports at gateway ports on the Gulf Coast. This means that American family farmers, energy producers, manufactur- ers, constructors, and other commodity shippers have a chance to compete – and win – in the global marketplace. The inland waterways also help to sustain more than 541,000 jobs, strongly bolstering the U.S. economy, all while transport- ing freight in the most energy-effcient, environ- mentally friendly, and safe way.

The most recent attempt at a plan to mod- ernize the Nation’s infrastructure was foated by the Trump Administration in 2017, an effort that proved to be unsuccessful. The Trump plan was unwelcomed by inland waterways interests because it called for the Secretary of the Army to enter into Public Private Partnerships (P3s) or other alternative fnancing schemes, and to authorize the federal government and non-fed- eral entities to levy and retain user fees. For the inland waterways, this assuredly means tolls or