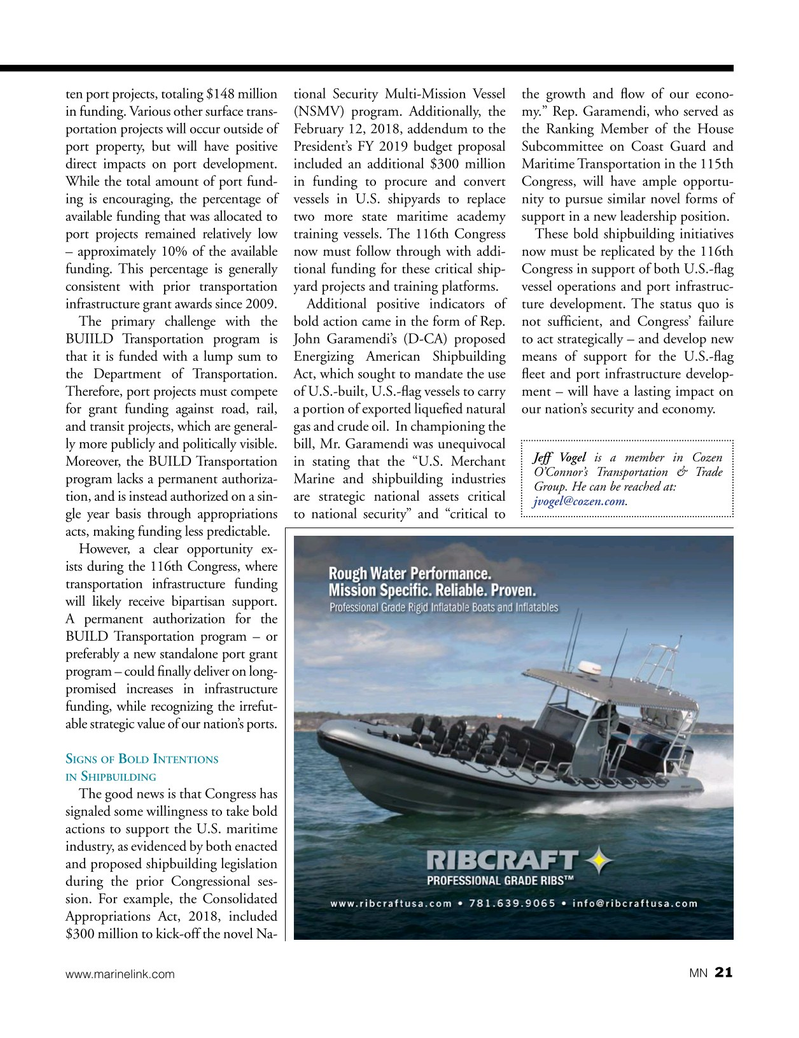 ten port projects, totaling $148 million tional Security Multi-Mission Vessel the growth and fow of our econo- in funding. Various other surface trans- (NSMV) program. Additionally, the my.” Rep. Garamendi, who served as portation projects will occur outside of February 12, 2018, addendum to the the Ranking Member of the House port property, but will have positive President’s FY 2019 budget proposal Subcommittee on Coast Guard and direct impacts on port development. included an additional $300 million Maritime Transportation in the 115th

While the total amount of port fund- in funding to procure and convert Congress, will have ample opportu- ing is encouraging, the percentage of vessels in U.S. shipyards to replace nity to pursue similar novel forms of available funding that was allocated to two more state maritime academy support in a new leadership position.

port projects remained relatively low training vessels. The 116th Congress These bold shipbuilding initiatives – approximately 10% of the available now must follow through with addi- now must be replicated by the 116th funding. This percentage is generally tional funding for these critical ship- Congress in support of both U.S.-fag consistent with prior transportation yard projects and training platforms. vessel operations and port infrastruc- infrastructure grant awards since 2009. Additional positive indicators of ture development. The status quo is

The primary challenge with the bold action came in the form of Rep. not suffcient, and Congress’ failure

BUIILD Transportation program is John Garamendi’s (D-CA) proposed to act strategically – and develop new that it is funded with a lump sum to Energizing American Shipbuilding means of support for the U.S.-fag the Department of Transportation. Act, which sought to mandate the use feet and port infrastructure develop-

Therefore, port projects must compete of U.S.-built, U.S.-fag vessels to carry ment – will have a lasting impact on for grant funding against road, rail, a portion of exported liquefed natural our nation’s security and economy.

and transit projects, which are general- gas and crude oil. In championing the ly more publicly and politically visible. bill, Mr. Garamendi was unequivocal

Jeff Vogel is a member in Cozen

Moreover, the BUILD Transportation in stating that the “U.S. Merchant

Group. He can be reached at: tion, and is instead authorized on a sin- are strategic national assets critical jvogel@cozen.com. gle year basis through appropriations to national security” and “critical to acts, making funding less predictable.

However, a clear opportunity ex- ists during the 116th Congress, where transportation infrastructure funding will likely receive bipartisan support.

A permanent authorization for the

S B I IgnS oF old ntentIonS

The good news is that Congress has signaled some willingness to take bold actions to support the U.S. maritime industry, as evidenced by both enacted and proposed shipbuilding legislation during the prior Congressional ses- sion. For example, the Consolidated