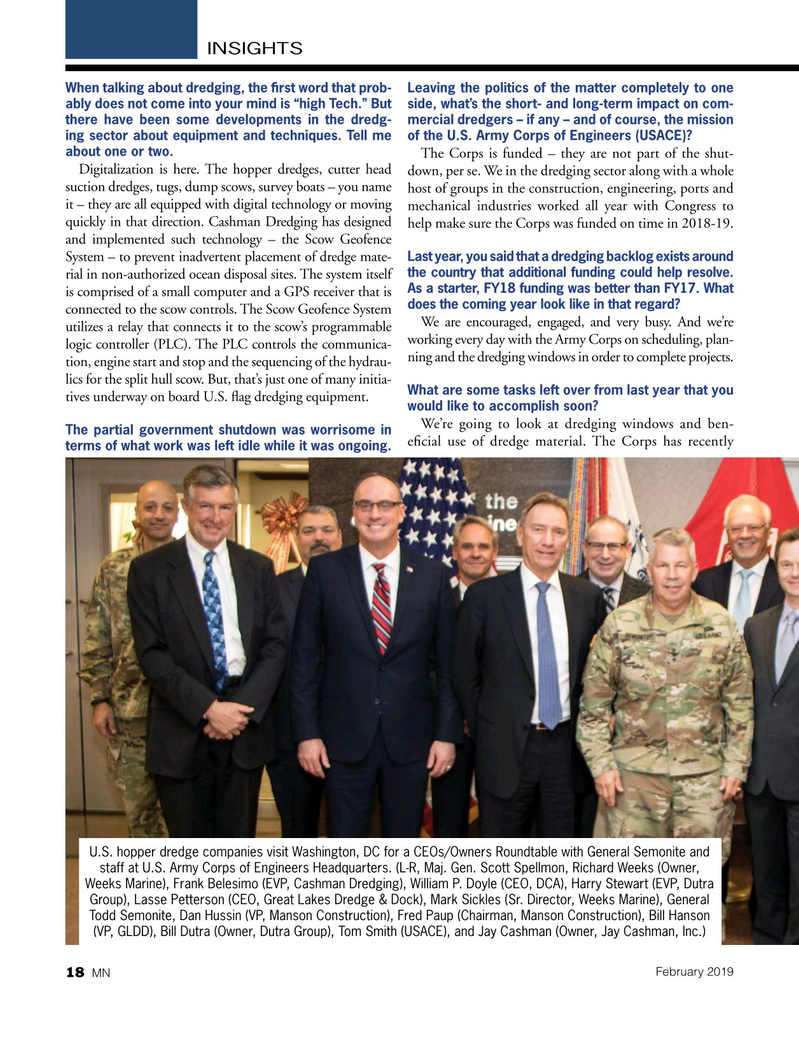 When talking about dredging, the frst word that prob- Leaving the politics of the matter completely to one ably does not come into your mind is “high Tech.” But side, what’s the short- and long-term impact on com- there have been some developments in the dredg- mercial dredgers – if any – and of course, the mission ing sector about equipment and techniques. Tell me of the U.S. Army Corps of Engineers (USACE)?

about one or two.

The Corps is funded – they are not part of the shut-

Digitalization is here. The hopper dredges, cutter head down, per se. We in the dredging sector along with a whole suction dredges, tugs, dump scows, survey boats – you name host of groups in the construction, engineering, ports and it – they are all equipped with digital technology or moving mechanical industries worked all year with Congress to quickly in that direction. Cashman Dredging has designed help make sure the Corps was funded on time in 2018-19. and implemented such technology – the Scow Geofence

Last year, you said that a dredging backlog exists around

System – to prevent inadvertent placement of dredge mate- the country that additional funding could help resolve. rial in non-authorized ocean disposal sites. The system itself

As a starter, FY18 funding was better than FY17. What is comprised of a small computer and a GPS receiver that is does the coming year look like in that regard?

connected to the scow controls. The Scow Geofence System

We are encouraged, engaged, and very busy. And we’re utilizes a relay that connects it to the scow’s programmable working every day with the Army Corps on scheduling, plan- logic controller (PLC). The PLC controls the communica- ning and the dredging windows in order to complete projects. tion, engine start and stop and the sequencing of the hydrau- lics for the split hull scow. But, that’s just one of many initia-

What are some tasks left over from last year that you tives underway on board U.S. fag dredging equipment.

We’re going to look at dredging windows and ben-

The partial government shutdown was worrisome in efcial use of dredge material. The Corps has recently terms of what work was left idle while it was ongoing.