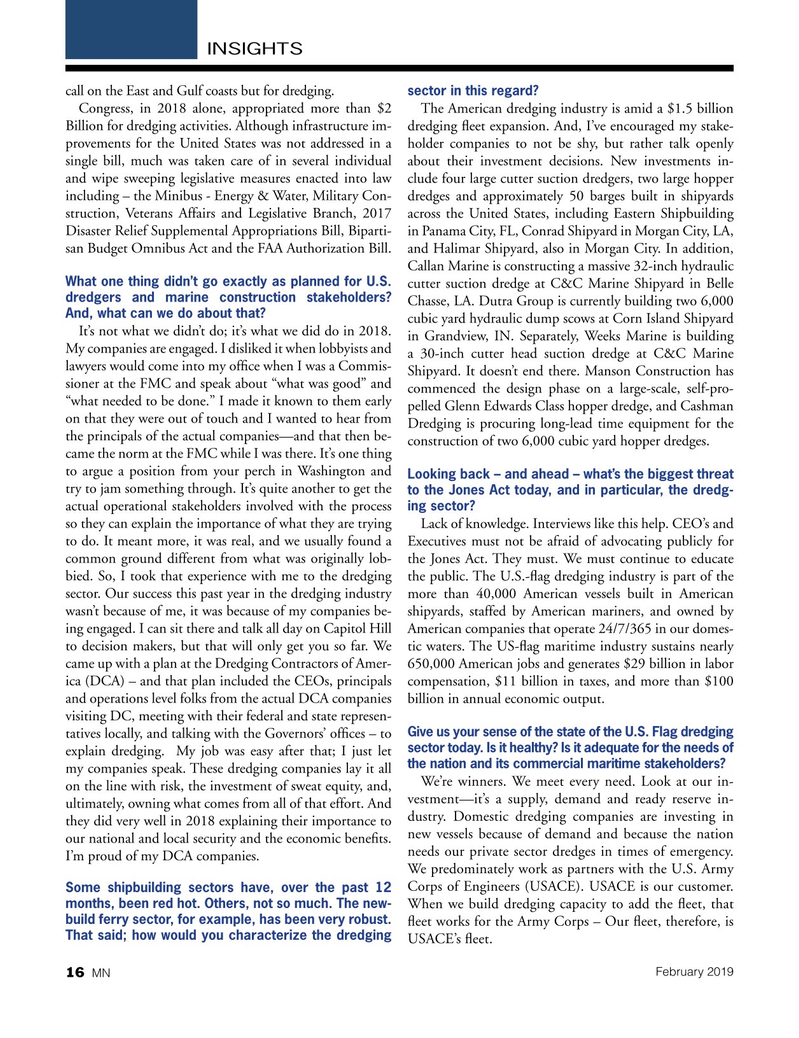 INSIGHTS call on the East and Gulf coasts but for dredging.

sector in this regard?

Congress, in 2018 alone, appropriated more than $2 The American dredging industry is amid a $1.5 billion

Billion for dredging activities. Although infrastructure im- dredging feet expansion. And, I’ve encouraged my stake- provements for the United States was not addressed in a holder companies to not be shy, but rather talk openly single bill, much was taken care of in several individual about their investment decisions. New investments in- and wipe sweeping legislative measures enacted into law clude four large cutter suction dredgers, two large hopper including – the Minibus - Energy & Water, Military Con- dredges and approximately 50 barges built in shipyards struction, Veterans Affairs and Legislative Branch, 2017 across the United States, including Eastern Shipbuilding

And, what can we do about that?

It’s not what we didn’t do; it’s what we did do in 2018. in Grandview, IN. Separately, Weeks Marine is building

My companies are engaged. I disliked it when lobbyists and a 30-inch cutter head suction dredge at C&C Marine lawyers would come into my offce when I was a Commis-

Shipyard. It doesn’t end there. Manson Construction has sioner at the FMC and speak about “what was good” and commenced the design phase on a large-scale, self-pro- “what needed to be done.” I made it known to them early pelled Glenn Edwards Class hopper dredge, and Cashman on that they were out of touch and I wanted to hear from Dredging is procuring long-lead time equipment for the the principals of the actual companies—and that then be- construction of two 6,000 cubic yard hopper dredges.

came the norm at the FMC while I was there. It’s one thing to argue a position from your perch in Washington and

Looking back – and ahead – what’s the biggest threat try to jam something through. It’s quite another to get the to the Jones Act today, and in particular, the dredg- actual operational stakeholders involved with the process ing sector?

so they can explain the importance of what they are trying Lack of knowledge. Interviews like this help. CEO’s and to do. It meant more, it was real, and we usually found a Executives must not be afraid of advocating publicly for common ground different from what was originally lob- the Jones Act. They must. We must continue to educate bied. So, I took that experience with me to the dredging the public. The U.S.-fag dredging industry is part of the sector. Our success this past year in the dredging industry more than 40,000 American vessels built in American wasn’t because of me, it was because of my companies be- shipyards, staffed by American mariners, and owned by ing engaged. I can sit there and talk all day on Capitol Hill American companies that operate 24/7/365 in our domes- to decision makers, but that will only get you so far. We tic waters. The US-fag maritime industry sustains nearly came up with a plan at the Dredging Contractors of Amer- 650,000 American jobs and generates $29 billion in labor ica (DCA) – and that plan included the CEOs, principals compensation, $11 billion in taxes, and more than $100 and operations level folks from the actual DCA companies billion in annual economic output. visiting DC, meeting with their federal and state represen-

Give us your sense of the state of the U.S. Flag dredging tatives locally, and talking with the Governors’ offces – to sector today. Is it healthy? Is it adequate for the needs of explain dredging. My job was easy after that; I just let the nation and its commercial maritime stakeholders?

my companies speak. These dredging companies lay it all

We’re winners. We meet every need. Look at our in- on the line with risk, the investment of sweat equity, and, ultimately, owning what comes from all of that effort. And vestment—it’s a supply, demand and ready reserve in- they did very well in 2018 explaining their importance to dustry. Domestic dredging companies are investing in our national and local security and the economic benefts. new vessels because of demand and because the nation needs our private sector dredges in times of emergency.

I’m proud of my DCA companies.

We predominately work as partners with the U.S. Army

Corps of Engineers (USACE). USACE is our customer.

Some shipbuilding sectors have, over the past 12 months, been red hot. Others, not so much. The new-

When we build dredging capacity to add the feet, that build ferry sector, for example, has been very robust. feet works for the Army Corps – Our feet, therefore, is

That said; how would you characterize the dredging